2014 Tax Increases- Truth! & Fiction!  Depending on the bracket!

This is a forwarded email that warns that as of January 1, 2014 taxes were raised thanks to the Affordable Care Act, aka “Obamacare”.
Some versions of the eRumor begin with “Happy New Year America.” Other versions say that the tax increases begin July 1, 2014.

According to the website Taxes.About.Com there were changes in the tax rates and brackets.  Overall income tax rates are the same but the tax brackets were shifted.  Some people depending on where they are in the tax bracket will actually a different percent in taxes than the prior year.   An additional 3.8% will be tacked on to certain capital gains reported, applying to a bracket of  200,000 for single tax payers and $250,000 for joint tax payers.  Also, many taxes and credits have been added, which we have listed further down the page.
The site has information posted on personal tax rates and tax brackets for 2014. Below are screenshots from that site: 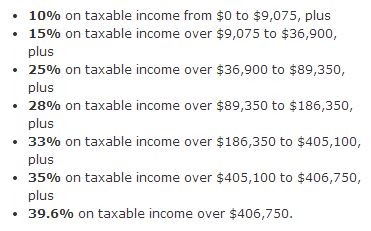 More taxes and credits related to Affordable Care Act
The Obamacarefacts.com site listed the following taxes and tax credits relating to the Affordable Care Act:
ObamaCare Taxes That Most Likely Won’t Directly Affect the Average American
• 2.3% Tax on Medical Device Manufacturers 2014
• 10% Tax on Indoor Tanning Services 2014
• Blue Cross/Blue Shield Tax Hike
• Excise Tax on Charitable Hospitals which fail to comply with the requirements of ObamaCare
• Tax on Brand Name Drugs
• Tax on Health Insurers
• $500,000 Annual Executive Compensation Limit for Health Insurance Executives
• Elimination of tax deduction for employer-provided retirement Rx drug coverage in coordination with Medicare Part D
• Employer Mandate on business with over 50 full-time equivalent employees to provide health insurance to full-time employees. $2000 per employee $3000 if employee uses tax credits to buy insurance on the exchange (marketplace). (pushed back to 2015)
• Medicare Tax on Investment Income 3.8% over $200k/$250k
• Medicare Part A Tax increase of .9% over $200k/$250k
• Employer Reporting of Insurance on W-2 (not a tax)
• Corporate 1099-MISC Information Reporting (repealed)
• Codification of the “economic substance doctrine” (not a tax)
ObamaCare Taxes That (may) Directly Affect the Average American
• 40% Excise Tax “Cadillac” on high-end Premium Health Insurance Plans 2018
• An annual $63 fee levied by ObamaCare on all plans (decreased each year until 2017 when pre-existing conditions are eliminated) to help pay for insurance companies covering the costs of high-risk pools.
• Medicine Cabinet Tax
Over the counter medicines no longer qualified as medical expenses for flexible spending accounts (FSAs), health reimbursement arrangements (HRAs), health savings accounts (HSAs), and Archer Medical Saving accounts (MSAs).
• Additional Tax on HSA/MSA Distributions
Health savings account or an Archer medical savings account, penalties for spending money on non-qualified medical expenses. 10% to 20% in the case of a HSA and from 15% to 20% in the case of a MSA.
• Flexible Spending Account Cap 2013
Contributions to FSAs are reduced to $2,500 from $5,000.
• Medical Deduction Threshold tax increase 2013
Threshold to deduct medical expenses as an itemized deduction increases to 10% from 7.5%.
• Individual Mandate (the tax for not purchasing insurance if you can afford it) 2014
Starting in 2014, anyone not buying “qualifying” health insurance must pay an income tax surtax at a rate of 1% or $95 in 2014 to 2.5% in 2016 on profitable income above the tax threshold. The total penalty amount cannot exceed the national average of the annual premiums of a “bronze level” health insurance plan on ObamaCare exchanges.
• Premium Tax Credits for Small Businesses 2014 (not a tax)
• Advanced Premium Tax Credits for Individuals and Families 2014 (not a tax)
• Medical Loss Ratio (MRL): Premium rebates (not a tax)

For most of the time that Barack Obama has been in the Oval Office, the U.S. Government has not had an approved budget and the business of government has been operating by a series of continuing resolutions.
In February 2014 Defense Secretary Chuck Hagel announced that the military was going to be reduced.   This according to a February 24, 2014 article by the Los Angeles Times that said “Congress has already ordered nearly $500 billion in defense spending cuts over the next decade.”  The article also said “that the Army would drop from today’s active-duty force of 522,000 soldiers to between 440,000 and 450,000 over the next three years.”
Posted 03/24/14  Updated 8/20/14