On June 25 2020, CommonDreams.com editor Eoin Higgins tweeted screenshots of a Facebook post on the since-deleted Facebook page “Carol Ann — The James Experience” — in which self-professed “entity channeler” Carol Ann Collins claimed to have psychically obtained information from George Floyd after his death:

Carol channels George Floyd. A powerful message from George about choosing life, choosing to offer friendship love and forgiveness, to help stop the suffering, to “go home — enjoy your family, tell them you love them … remove my name from being associated with hate .. civil liberties are not what we need to be fighting for, be the one who says I love you to all.”

________________________
Carol Collins is a verbal, conscious channel who has the ability to speak with non-physical vibrational Beings clairvoyantly and verbally. She gives workshops, classes, readings, and mentoring with the Entity James.

A portion which in particular chagrined social media users is emphasized below. Collins claimed Floyd said “civil liberties are not what we need to be fighting for,” suggesting that Floyd disapproved of protests against police brutality.

The same screenshot was shared to Reddit’s r/iamatotalpieceofshit on June 25 2020:

“Carol channels George Floyd”. This is just…. ugh. from iamatotalpieceofshit

The URL seen in the screenshot (https://youtu.be/ezRvy4SabmQ) led not to an error page but to a message that whatever content once existed there had been made private by the original uploader. We were unable to locate a cached or archived copy of the video in which Collins purports to “channel George Floyd.”

Collins’ Instagram page (@the_carolann) was accessible, but had been made private at some point in June 2020: 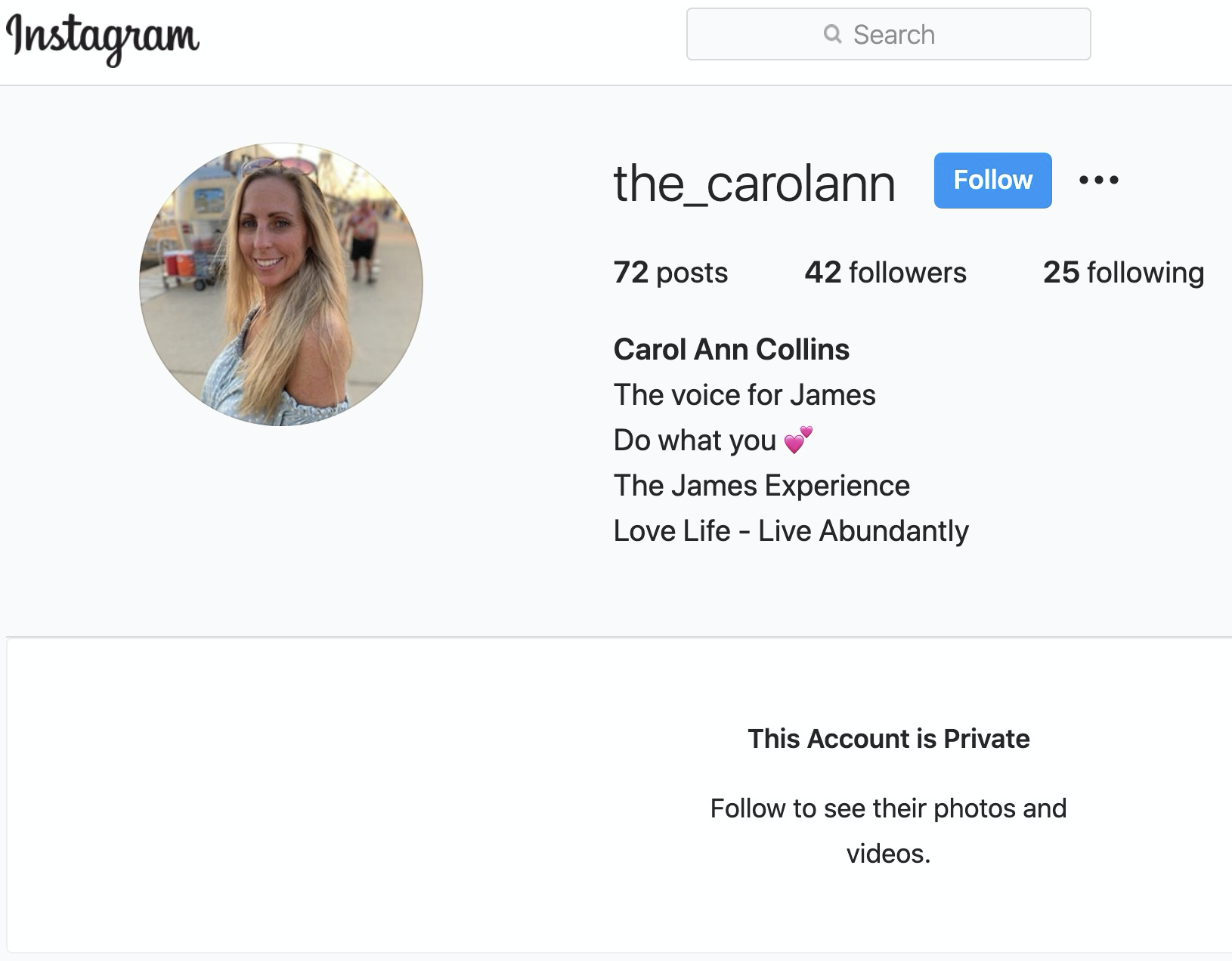 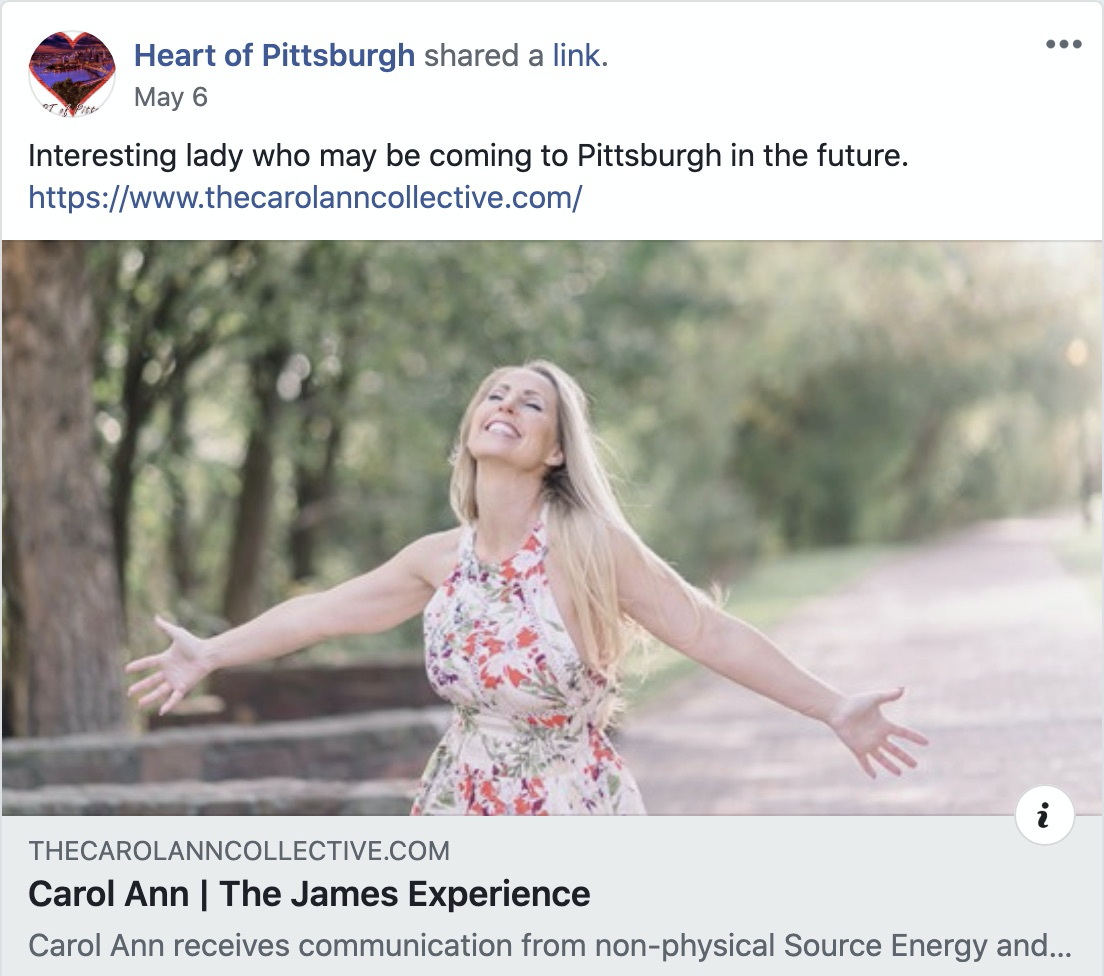 It appeared that Collins’ site was unpublished at some point on or after June 26 2020. We located a working Google Cache (archived) from “Jun 26, 2020 19:20:50 GMT.” Visible on the original landing page was a section titled “Meet Carol Ann,” which read:

I love sharing how I received my gift of voice-channeling and how it emulates Esther Hicks (Abraham-Hicks). Through meditation came clairmobility, spelling words with my nose, which was then followed by what we lovingly call “voice giving.” The following is an excerpt from our book Becoming Me.

One morning while meditating, my head made a quick yet tiny motion to the left. It was so subtle that I thought maybe it was my imagination until it happened again a few weeks later. This “tick” as I called it began happening more frequently and eventually turned into a small swaying motion that grew into big, beautiful, repeating, swirling motions with my head. For months I asked myself –
“is this how my body interprets vibration or is this communication I am not yet translating?”
And then, one morning I recognized the motion my head made as the infinity sign and I said out loud “Infinity.”
My head suddenly stopped moving.
The same motion repeated and again I said “Infinity.” This time my head stopped briefly then immediately began to spell words in distinct, cursive letters as if across a chalkboard.

A separate portion described Collins’ previous activity on social media, but no mention of her attempt to “channel George Floyd” was visible in that archive:

James is always ready to share their wealth of information on the Law of Attraction, choosing to be happy, and even debunking myths. James has a unique way of guiding us toward getting everything we want out of life.

Separate areas of thecarolanncollective.com were archived on June 26 2020. One was a longer version of “Meet Carol Ann,” and the other was a different version of a landing page. Neither mentioned her purported channeling of Floyd.

It also appeared a version of Collins’ Facebook page existed on June 26 2020, and an attempt was made to archive the page. However, the archived version did not display the page’s content, which was located at facebook.com/thecarolann.

Although the post and channeler were real, we were unable to locate an archive of the video in which Carol Collins claimed to be channeling George Floyd or verify its content. Collins hastily deleted most of her internet presence, from her Facebook page to her entire website (and made her Instagram private). Archives of “Carol Ann — The James Experience” remained accessible, but her content about channeling Floyd was not readily available.