In May 2021, CTV Calgary used a stock image of Chris Watts and the Watts family in an unrelated segment about family finances.

On May 5 2021, posts on Facebook and Twitter suggested that CTV Calgary had featured an image of Chris Watts and the Watts family in a segment about family finances; Chris Watts was convicted of murdering his wife and children in 2018: 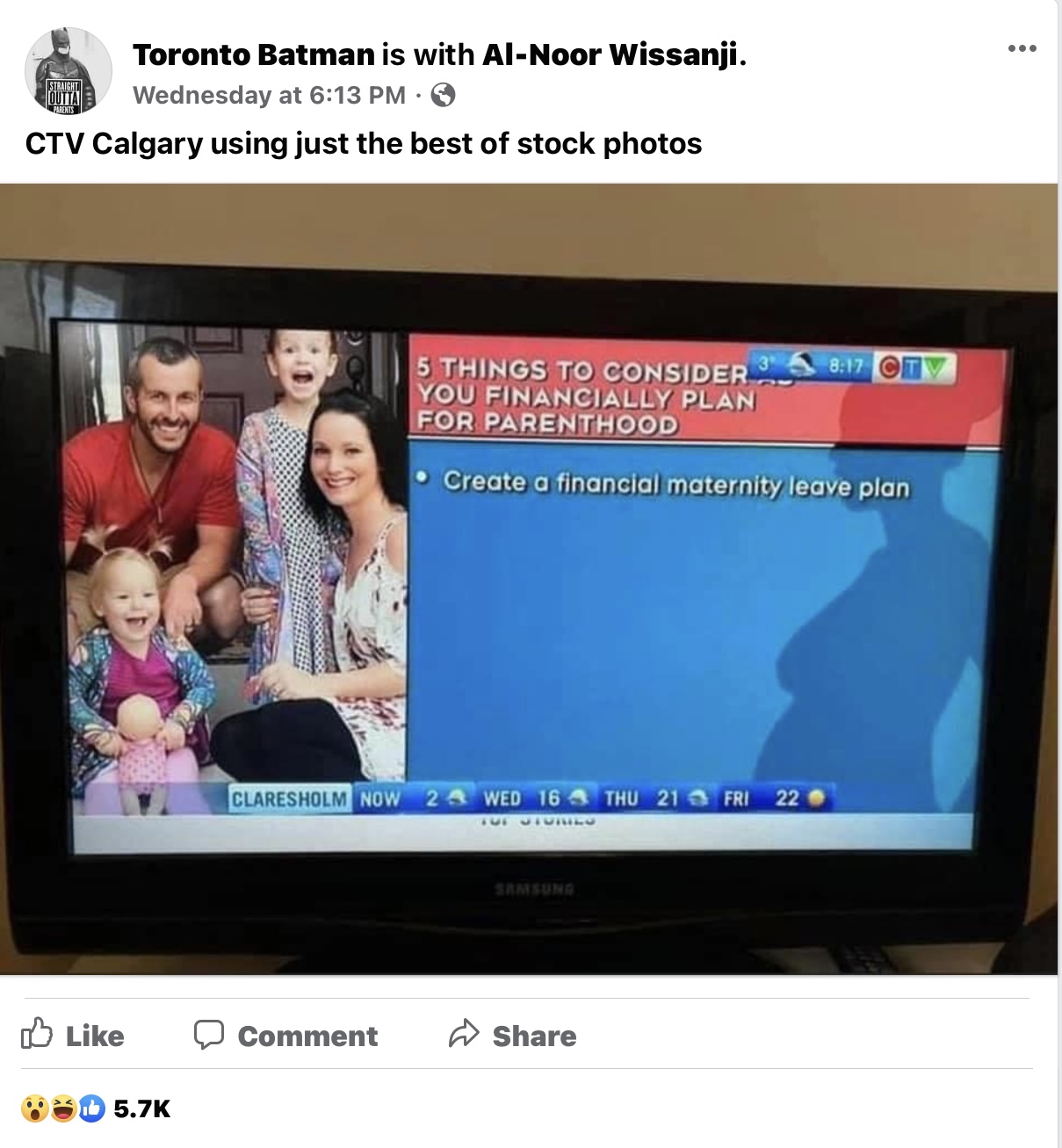 That Facebook post was captioned “CTV Calgary using just the best of stock photos,” and the post was shared tens of thousands of times. A similar tweet (also published on May 5 2021) was a bit more explicit in explaining the screenshot:

Ummmm… not CTV Calgary using a photo of a man who murdered his pregnant wife and two kids as a stock photo for a story about being financially prepared for parenthood. 😳 pic.twitter.com/S6peXA3VLI

Ummmm… not CTV Calgary using a photo of a man who murdered his pregnant wife and two kids as a stock photo for a story about being financially prepared for parenthood. 😳

Both images were identical, with a “TOP STORIES” chyron partially displayed at the bottom. To the left was a well-known image of the Watts family before the murders, and to the right, a graphic read:

5 THINGS TO CONSIDER AS YOU FINANCIALLY PLAN FOR PARENTHOOD

Posts shared to Reddit’s r/alberta and r/Calgary on May 5 and May 7 2021 also included the same screenshot:

Did CTV Calgary really use a photo of Christopher Watts and family for a Parenthood segment? This is the saddest thing I have ever seen…put CTV on blast and let everyone know! from Calgary

In that context, there was an open possibility that the image itself was not authentic, created as a distasteful joke; the Watts family’s financial difficulties were a high profile aspect of the murder investigation.

However, a separate May 5 2021 tweet by @SCUBADubois (with far lower engagement metrics) included video of the CTV Calgary segment:

This morning on @CTVCalgary there was a segment discussing starting a family and financial planning.

@KateEdits also followed up with different angles and videos of the segment:

There are people questioning the authenticity of this so I had my friend go back and rewatch and send me videos at different angles lol. I will post them after this. pic.twitter.com/rR3EYdk8ec

@SCUBADubois added that CTV Calgary had acknowledged the blunder, and an agency apparently connected to the segment commented in the thread to apologize:

Both the agency involved in the story and CTV have apologized for the oversight and the use of this photo in the story.

The agency’s apology is in the thread. CTV apologies on air, but I don’t have a copy of it to attach.

Thank you so much for raising this issue. CTV selects the images and the moment we realized this was the image they selected our VP was in touch immediately. CTV has since issued a formal apology and we apologize to you and all our followers.

Screenshots of a CTV Calgary graphic using an image of Chris Watts and the Watts family in an unrelated segment spread virally on and after May 5 2021, but most of the popular posts involved the same screenshot. Less popular posts displayed the segment from different angles, demonstrating that it did air with the unfortunate choice of image. We were unable to locate any specific apology from the outlet for the error.