A Dallas business owner was killed defending his establishment against people protesting extrajudicial killings by police.

Right-wing Twitter accounts distorted footage of an attack on a would-be vigilante during a demonstration against police extrajudicial killings in Dallas on May 30 2020.

One clip disseminated online pushed the claim that the man — later identified as Charles C.A. Shoultz — was a business owner killed by rioters during the protest. The demonstration was one of several around the United States and internationally that unfolded in the wake of the killing of George Floyd by police in Minneapolis five days earlier: 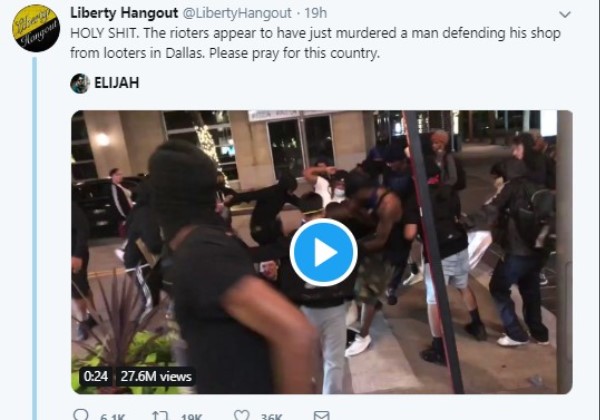 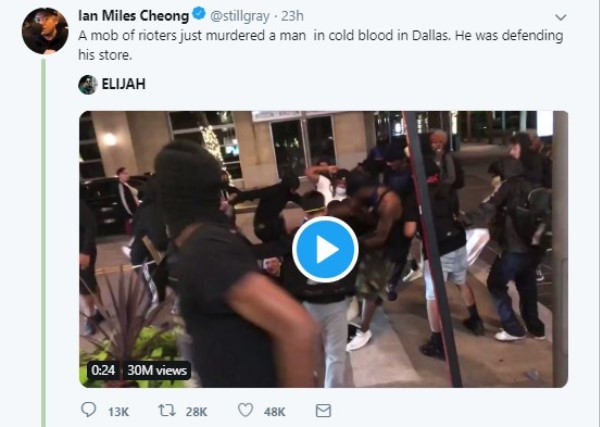 As The Intercept reported, the short video — which was actually released by a staff member for the right-wing broadcaster Glenn Beck — was spread even further by United States President Donald Trump.

But video leading up to the man being pummelled shows that the man was carrying a weapon he later identified as a sword and that people in the crowd threw things at him. Footage also shows him chasing after people brandishing his weapon before the crowd converges on him:

He was defending his business (I have not seen any police report) from possible looters with a sword, There was a moment when he tried to flee, but people started to instigate him; this happen before that. pic.twitter.com/AnyzUAb4Bd

the full video of the man who was attacked in downtown dallas. he literally ran after them WITH A SWORD. please share the full video and not just the clip where they attacked him
pic.twitter.com/5fZPLKd8er

While the man was beaten and apparently bloodied, his injuries were not fatal; he was feeling well enough to tweet and identify himself as the man in the video:

Other tweets captured online show that according to him, he was acting out of concern that his apartment complex would be “breached”:

I felt a certain amount of danger from the large groups of people moving through that neighborhood, because Victory Park is MY neighborhood. I live in an apartment building only a few blocks from where I was attacked. I didn’t come from far away.

Access to my building is restricted, but I couldn’t help but worry about it being breached. If my concierge was overpowered, anyone who overpowered him could access every floor of the building, including mine. So I thought it would be better to go to them first.

I felt it was a strong feeling that it was better to let myself out to meet the danger head-on rather than wait for it to come seek me out. This was probably foolish, rather than brave, in hindsight. But it is what I thought at the time. 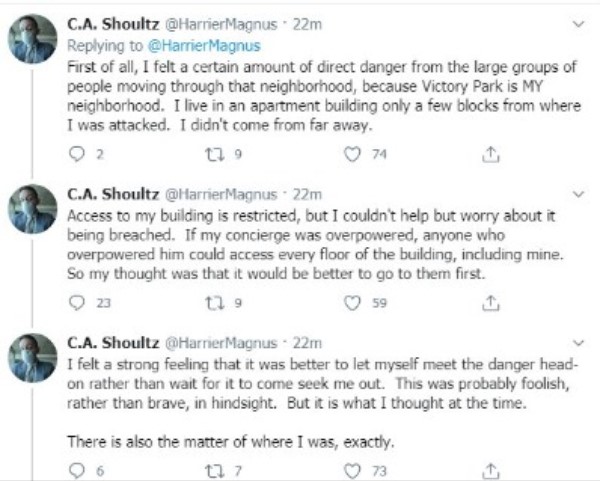 Shoultz further claimed that he was trying to protect a local bar out of fear that it would be “attacked and destroyed” like Deep Ellum, a neighborhood where some businesses were vandalized amid the demonstrations. Police have claimed that demonstrators threw water bottles and bricks at them. The neighborhood, as well as downtown Dallas, is now under a curfew imposed by law enforcement.

“Now, does this mean that I should have used my dumb machete and hold off an entire angry mob? No. That was bravery to the point of stupidity,” he added. “I realize that now.” 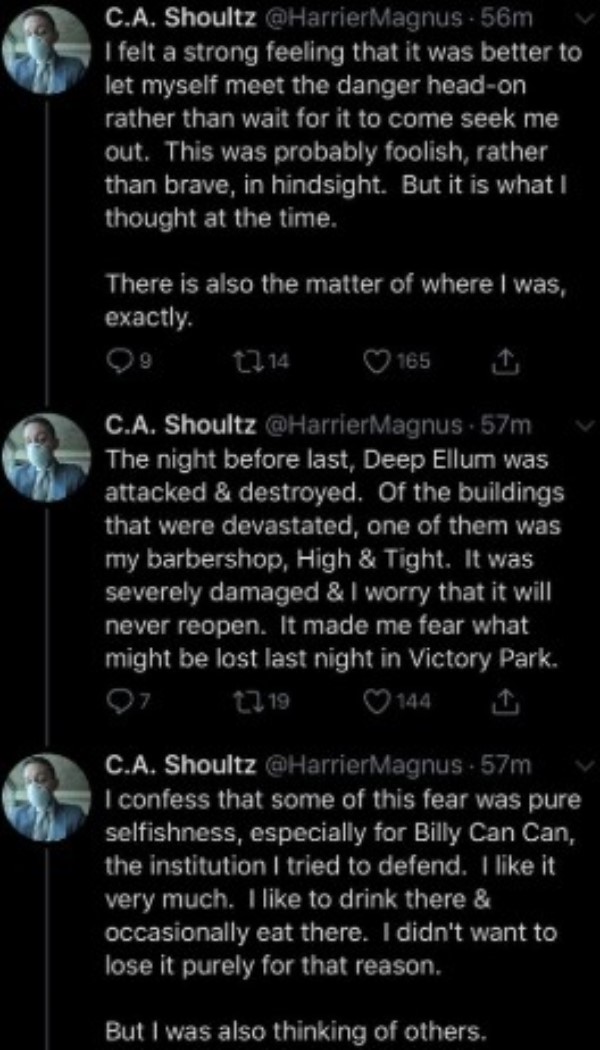 A day before his ill-fated excursion, he boasted online about his weapon:

I have a machete I keep under my bed for home defense. It’s shaped like an old Roman gladius. Its blade is high carbon steel and it’s EXTREMELY sharp. I could absolutely kill a man with it if he’s not wearing armor.

Am I going to have start carrying it around Dallas?

Dallas police confirmed to news outlets that Shoultz was “carrying a machete to allegedly protect his neighborhood from protesters. The victim confronted protesters while holding the machete and was subsequently assaulted by the protesters.”