The Notre Dame Cathedral fire was "predicted" in an episode of "The Simpsons."

Among the many conspiracy theories around the Notre Dame Cathedral fire of April 15 2019 was the rumor that an episode ofThe Simpsons had predicted the blaze, continuing a rather peculiar pattern of stories around predictions made by the long-running and beloved cartoon series:

A Facebook version of this particular shared on April 21 2019 (archived here) appeared to substantiate the claim with an image of character Mr. Burns standing in front of a burning church, a sign on which read “Notre Dame de Springfield.” Oddly, other iterations for the same rumor depicted an entirely different Springfield church on fire as “proof” that The Simpsons had predicted the event: 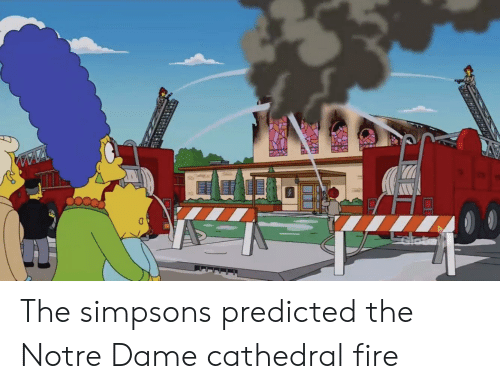 This iteration appeared before the Facebook post, suggesting that people may have edited imagery from The Simpsons to better fit the rumor in order to accrue shares and engagement.

Although it is difficult to make a determination based solely on a still image, flames seen at the top of “Notre Dame de Springfield” appeared as though they may have been edited into the image at a later date. An April 21 2019 YouTube video about the rumor showed stills of the episode with a different fire pattern around the building:

The Simpsons imagery was from Season 19, Episode 407, which was titled “Husbands and Knives” and originally aired in November 2007. Three separate existing recaps of the show do not mention a portion in which “Notre Dame de Springfield” is on fire, nor does the screen capture match the post-fire memes:

Homer and Marge run to the top of Springfield’s Notre Dame tower and Marge, saying she wants a trophy husband, deliberately pushes Homer off the tower.

The most conclusive proof that The Simpsons’ purported “prediction” of the Notre Dame Cathedral fire was misrepresented on social media came in the form of this clip from the “Husbands and Knives” episode. One version was shared to YouTube in January 2019 (before the fire), and the relevant segment lasted from the 0:50 mark to about 1:25:

In the clip, Notre Dame de Springfield is not seen on fire at any point, and it appears that subsequent social media posts claiming otherwise were altered to better “match” the imagery of the April 15 2019 event. Although Notre Dame de Springfield did appear in the November 2007 Simpsons episode “Husbands and Knives,” that episode did not include a segment in which the cartoon version of the cathedral catches fire.