Facebook is deploying "bots" disguised as fact-checkers that will block posts, particularly those with conservative content, so users must block them manually.

A January 2020 Facebook post sought to convince one social media user’s friends not only that fact-checkers were employed by Facebook chief executive officer Mark Zuckerberg to target conservative content in posts, but that those same fact-checker bots could be easily blocked: 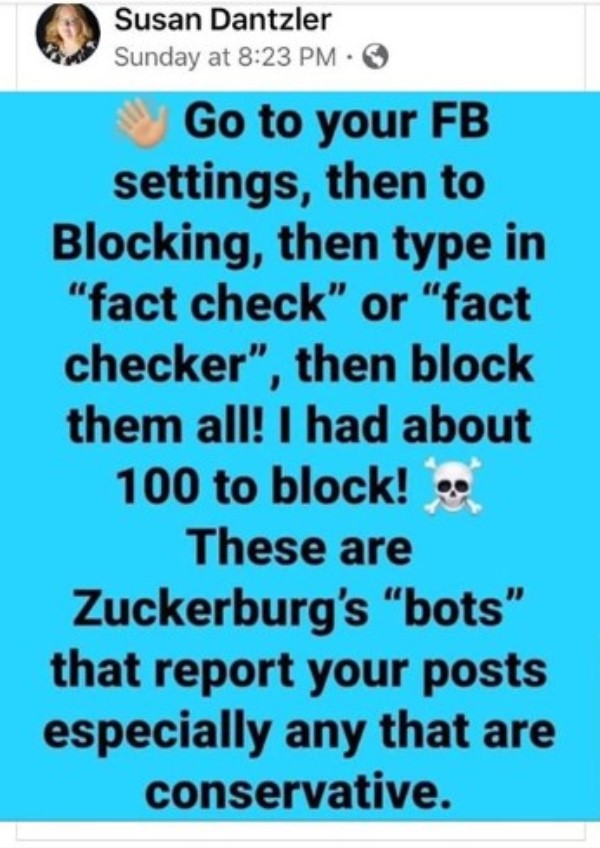 Go to your FB settings, then to Blocking, then type in ‘fact check or ‘fact checker,’ then block them all! I had about 100 to block! These are Zuckerberg’s ‘bots’ that report your posts especially any that are conservative.

She also posted a link to a March 2017 story from The Guardian about Facebook’s on-site tool relying on determinations by third-party fact-checkers. In the comments thread for the post, one of the user’s cohorts posted a photo of the “fact checkers” he said he had discovered: 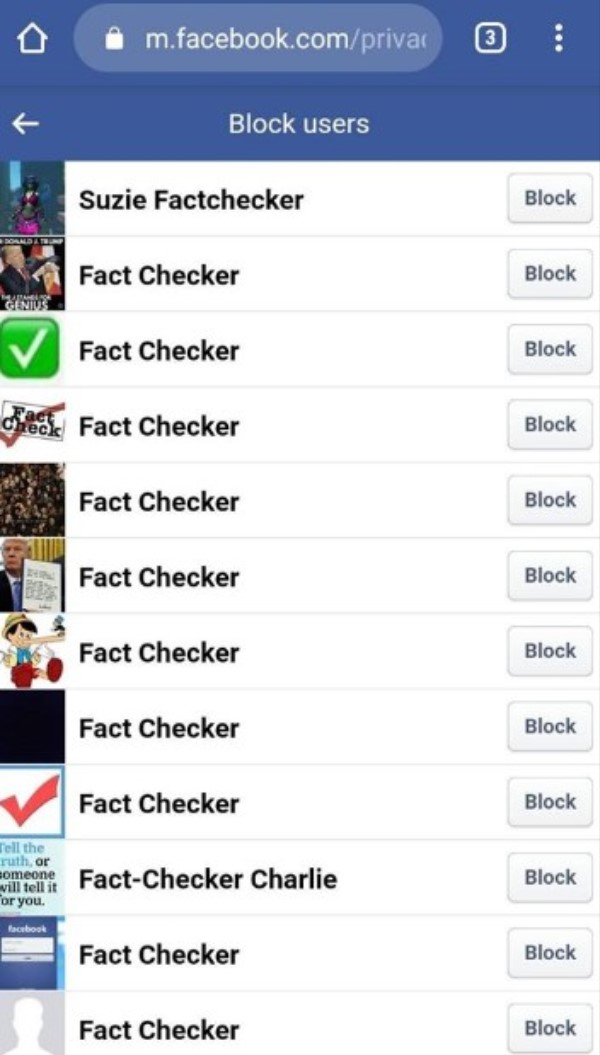 It is possible for Facebook users to block individual fact-checking sites’ pages through their settings. But it might disappoint those same people to know that “Suzie Factchecker” is in fact not part of Facebook’s efforts; the fact-checkers highlighting fake or decontextualized stories on the platform are actually ratified by the International Fact-Checking Network (IFCN). However, IFCN also enabled the inclusion in the program of a fact-checking entity owned by the parent company of an unreliable far-right blog called the Daily Caller. The original post also ignores Facebook’s moves appearing to be solely to placate right-wing interests in the name of “free speech.”

Zuckerberg himself told the House Financial Services Committee in October 2019 that political advertisements would not be subject to third-party fact-checking on his platform, even if they contained false information. That same month, Facebook announced that another right-wing blog — Breitbart — would be included in its Facebook News project in order to counter the persistent and overwhelmingly false perception that fact-checking and reporting is inherently left-wing. And on January 28 2020, the company confirmed reports that it had hired a producer from the right-wing network Fox News to serve as a video “curator” for Facebook News.

For the record, no one at TruthOrFiction is a “bot” or otherwise employed by Facebook; in fact, our managing editor has publicly criticized Facebook’s handling of third-party fact-checkers. The platform has also falsely claimed that our site is “clickbait,” and has refused to explain that decision despite repeated inquiries.