As Swedish activist Greta Thunberg’s campaign for world governments to meaningfully address climate danger gained more attention, so did the amount of online misinformation thrown at her.

For some social media users, that meant invoking far-right boogeyman George Soros, a billionaire activist who has become a catch-all term for antisemitic conspiracy theories about “globalists.”

One Facebook user flailing to discredit Thunberg went so far as to post a photograph altered to depict the two alongside one another: 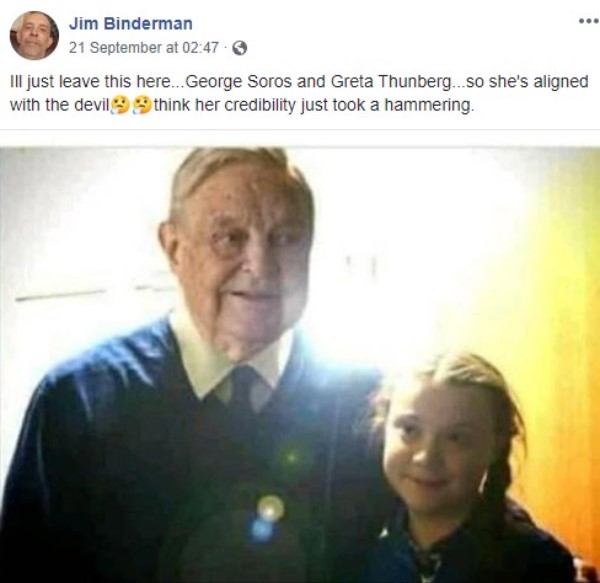 But as the UK-based fact-checking site FullFact.org reported, the original photograph, which Thunberg posted on her Twitter account in December 2018, was actually of herself alongside former United States Vice President Al Gore:

Thank you @algore for being a true pioneer. Very few people have done more. It was an honour to meet you. #climatecrisis #climatebreakdown pic.twitter.com/HzbvPcGkwu

Thank you @algore for being a true pioneer. Very few people have done more. It was an honour to meet you. #climatecrisis #climatebreakdown pic.twitter.com/HzbvPcGkwu

Meanwhile, one Spanish-speaking Twitter user whose feed is replete with retweeted complaints about Thunberg’s efforts pushed the idea that she and Soros are related: 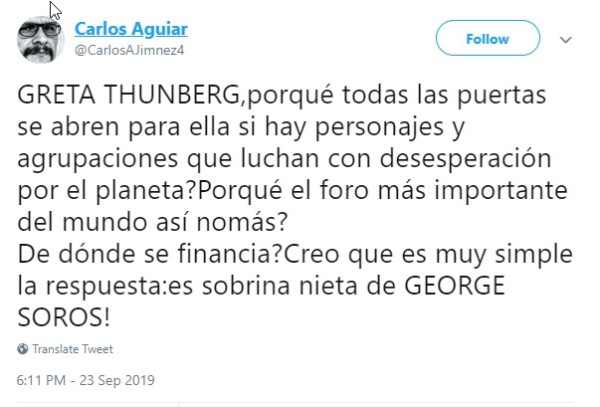 Why are all the doors opened for her when there’s people and groups desperately fighting for the planet? Why does she just get [access to] the most important forums in the world? Who is financing her? I think the answer is simple: She’s the grandniece of GEORGE SOROS!

The misinformation campaign against Thunberg intensified after the 16-year-old activist’s appearance at a United Nations summit dealing with global warming in which she excoriated world leaders for their inaction.

“People are suffering. People are dying. Entire ecosystems are collapsing,” she said. “We are in the beginning of a mass extinction. And all you can talk about is money and fairy tales of eternal economic growth. How dare you.”