In the UK, Heinz Ketchup has a shorter list of ingredients than its American counterpart, meaning that it is less unhealthy.

On February 14 2019, Vani Hari (popularly known as the “Food Babe” in the media) shared a graphic that compared the purported difference between Heinz Ketchup’s ingredient list in the United Kingdom versus the United States: 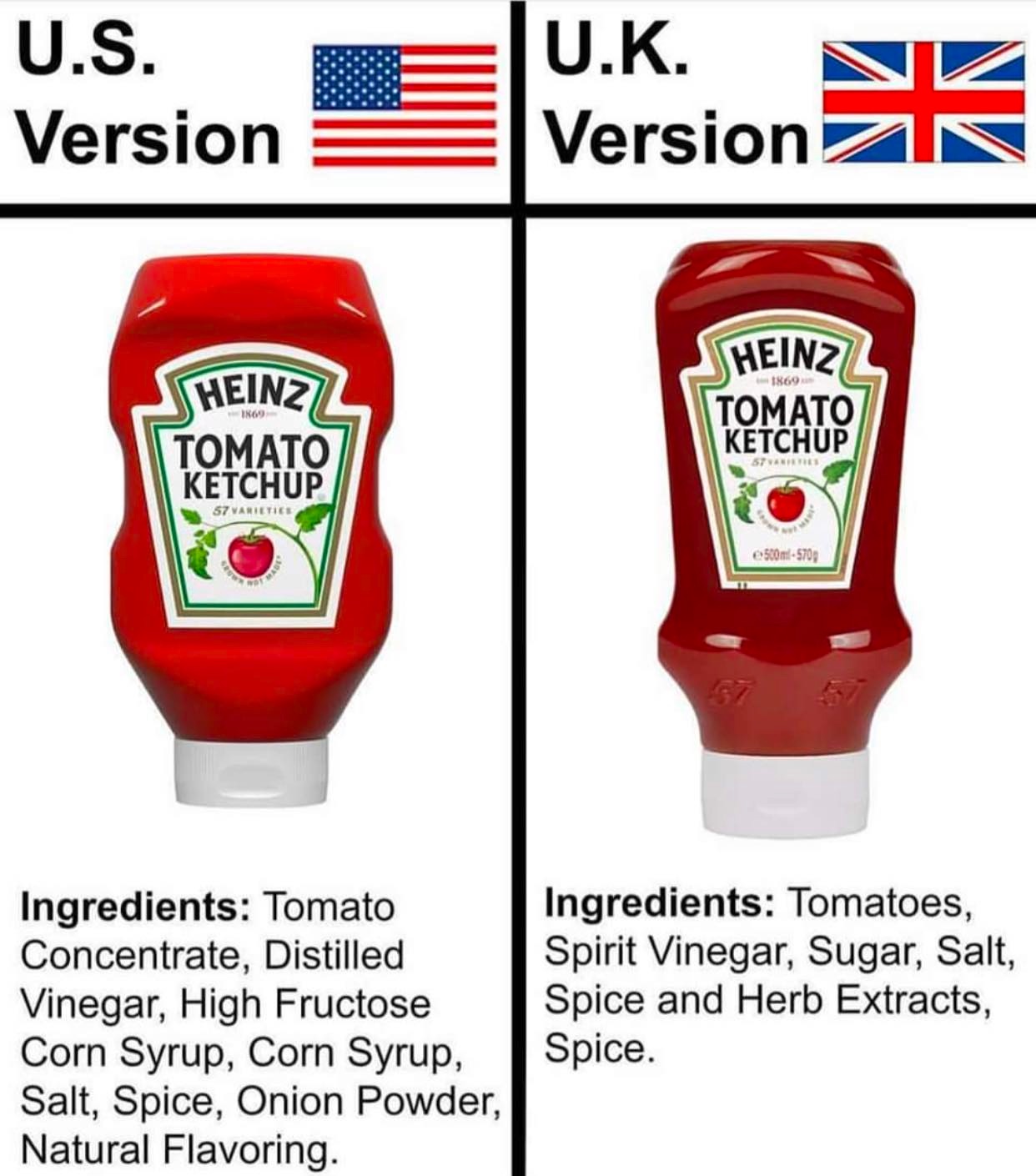 The image featured two bottles of Heinz Tomato Ketchup side by side, the wider and brighter bottle labeled “U.S. Version” and the thinner, darker labeled “U.K. Version.” The respective ingredient lists appeared underneath the bottles. The United States’ version had the following:

By contrast, the UK side read:

The difference in the ingredients as provided depended largely on the use of high fructose corn syrup in the American version in place of sugar used in the British version. The names of ingredients (distilled vinegar versus “spirit vinegar”) also appeared to differ, as well as proportion and specification variations — “spice” versus “onion powder,” and “natural flavoring” versus “herb extracts,” for example.

Alongside the share, Hari said that Heinz Ketchup in the United States includes genetically modified organisms, but was GMO-free in the UK, adding that the American division of Heinz was able to get away with using high-fructose corn syrup in lieu of sugar:

You know what you’ll find in almost every restaurant in America? Heinz Tomato Ketchup. Heinz ketchup is GMO-free in the U.K. but full of GMOs and High Fructose Corn Syrup in the U.S., along with lab-produced “natural flavoring” that helps create an addiction to their product. Think of this next time you’re dipping your fries in and can’t stop!

Why the double standard? If a company can get away with using cheaper ingredients, they will. It all comes down to their bottom line… at the expense of our health.

Part of this statement does appear to be true, given the differences in labeling laws between the United States and Britain, and Heinz UK’s stated commitment to steering clear of genetically modified foods.

The second part of the claim is not so accurate. High fructose corn syrup is manufactured in the U.S. and is rarely used in the UK. However, HFCS is not unheard of and is simply labeled differently in the UK:

In the 1970s, Nixon’s Agriculture Secretary, Earl Butz, realised that farmers were harvesting more corn than they knew what to do with thanks to more efficient, industrialised methods. His answer was to champion increased production and use of high-fructose corn syrup, which has undergone enzymatic processing to convert some glucose into fructose. The fructose-rich sweetener – now nicknamed “devil’s candy” in the US – was cheaper and sweeter than sugar. By the 1980s, high-fructose corn syrup (HFCS), called glucose-fructose syrup in the UK, was the favourite substitute for sugar worldwide….

According to a 2012 news article about high-fructose corn syrup (or glucose-fructose syrup), that product is not banned or otherwise disallowed in food production in either country:

The substance is used widely in the US, especially in soft drinks, for flavouring and to improve shelf life. In the UK it is found in a range of products including McVitie’s Hobnobs, Jaffa Cakes and Classic Rich Tea biscuits, Carte D’Or ice cream, Lucozade Energy Orange and Apple flavours, Yop yoghurts, McDonald’s Big Mac sauce, two flavours of Kellogg’s Special K bars and Kellogg’s Nutri-Grain Soft & Fruity.

The jury also remains out about whether HFCS truly is less healthy than sugar. In 2017, Berkeley Wellness covered the difference between sucrose and high-fructose corn syrup:

…The difference in how the body handles the two sugars has led to the belief that HFCS is much worse for you than regular sugar. However, several studies have clearly shown that HFCS and sucrose have indistinguishable metabolic effects and the same health consequences. That is, neither type of sugar is good for you.

Taken as a whole, the claims were two-fold. One involved the graphic, which was largely accurate. Aside from some minor differences, the ingredients in Heinz Ketchup in the United States versus in the UK were accurately represented in the image itself. As is often the case, the problems started in the commentary accompanying the post. Although it is true that American Heinz Ketchup contained high-fructose corn syrup while its British counterpart contained sugar, use of HFCS in the United States largely has to do with manufacturing and market availability, and the substance is not restricted in the UK, although there it goes by another name (but tastes just as sweet.)