After images of U.S. President Donald Trump holding up a Bible circulated, a photograph of Adolf Hitler in a similar post was unearthed.

After United States President Donald Trump controversially posed for photographs at a Washington, DC church while he held up a Bible, the following photograph of Trump juxtaposed with Adolf Hitler in a purportedly similar pose appeared and quickly went viral: 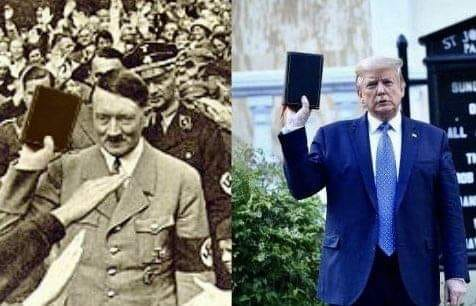 We encountered the image primarily in comments sections, typically without any explanation or other discourse, and occasionally on Twitter:

Trump’s visit to St. John’s Church on June 1 2020 was controversial in and of itself for a variety of reasons:

Law enforcement dispersed a peaceful protest with tear gas and rubber bullets at a park next to the White House, as the president vowed to deploy troops, if necessary, to “dominate the streets”.

Moments later Donald Trump walked out of the executive mansion to a nearby historic church, where he held up a Bible.

In media accounts, Trump was described as stilted and “awkward,” admitting he did not own the Bible he held:

He wielded the Bible like a foreign object, awkwardly adjusting his grip as though trying to get comfortable. He examined its cover. He held it up over his right shoulder like a crossing guard presenting a stop sign. He did not open it.

“Is that your Bible?” a reporter asked.

“It’s a Bible,” the president replied.

Even by the standards of Donald Trump’s religious photo ops, the dissonance was striking. Moments earlier, he had stood in the Rose Garden and threatened to unleash the military on unruly protesters. He used terms such as anarchy and domestic terror, and vowed to “dominate the streets.” To clear the way for his planned post-speech trip to St. John’s Church, police fired tear gas and rubber bullets into a crowd of peaceful demonstrators.

To determine whether the photograph of Hitler with a Bible was authentic, we first used reverse image search tools. Google was not initially helpful in this endeavor, suggesting the caption “hamster with a broken arm” for the isolated Hitler panel of the image: 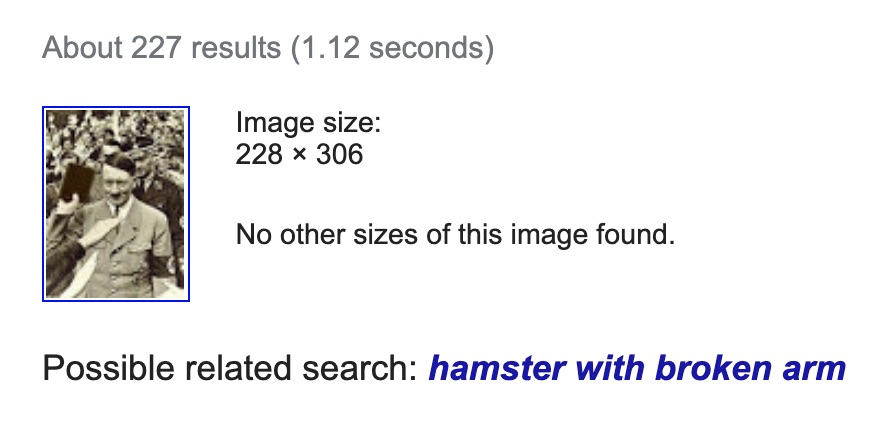 However, it didn’t take very long to find the source image in Getty Images’ repository. Titled “Nazi leader Adolf Hitler waves to the crowd as he is given the Nazi salute by thousands of supporters,” the image showed Hitler with his left hand up (sans the Bible or any book) in a crowd of supporters:

The photo of AH on left in the original post is photoshopped. But still, there are a lot of similarities between these unhinged sociopaths..unfortunately. pic.twitter.com/PILuya6FCE

Although the image of Trump is real and not in dispute, the image of Hitler holding up a Bible was doctored to fit the moment. In the original archival photograph, Hitler’s left hand is open and empty, and no Bible is displayed.