On June 21 2020, the Facebook page “Cosmic Enlightenment” shared the following meme, which claimed that the 2005 film V for Vendetta was about the use of a virus to control populations — and that it was set in the year 2020:

Alongside a still image of a character in the film, text read:

A 2005 film titled “V for Vendetta” is about a totalitarian dictatorship that gains its power by creating a society of fear due to an alleged virus spreading throughout the world. In the film the media pushes fear-based propaganda on the television screen of every household and on the city streets. The authoritarian dictator promises security but not freedom. The constant theme of “this is for your safety” is repeated throughout the film. Most importantly the film ends with society waking up and the corrupt, fascist regime is dismantled. What year is the film set? … 2020

The claim about V for Vendetta‘s premise and setting in the year 2020 strongly resembled another, earlier coronavirus “prediction” rumor that the film Akira was also prescient about the year 2020:

Did ‘Akira’ Predict a 2020 Coronavirus Outbreak?

When Was V for Vendetta Released?

Although the film was in limited release in December 2005, it wasn’t released to the United States until March 2006.

When Was V for Vendetta Set?

A March 2006 review written by Roger Ebert mentions the year 2020 at the start:

It is the year 2020. A virus runs wild in the world, most Americans are dead, and Britain is ruled by a fascist dictator who promises security but not freedom. One man stands against him, the man named V, who moves through London like a wraith despite the desperate efforts of the police. He wears a mask showing the face of Guy Fawkes, who in 1605 tried to blow up the houses of Parliament. On Nov. 5, the eve of Guy Fawkes Day, British schoolchildren for centuries have started bonfires to burn Fawkes in effigy. On this eve in 2020, V saves a young TV reporter named Evey from rape at the hands of the police, forces her to join him, and makes a busy night of it by blowing up the Old Bailey courtrooms.

Of the film’s basis, Ebert added:

This story was first told as a graphic novel written by Alan Moore and published in 1982 and 1983. Its hero plays altogether differently now, and yet, given the nature of the regime. is he a terrorist or a freedom fighter? Britain is ruled by a man named Sutler, who gives orders to his underlings from a wall-sized TV screen and seems the personification of Big Brother. 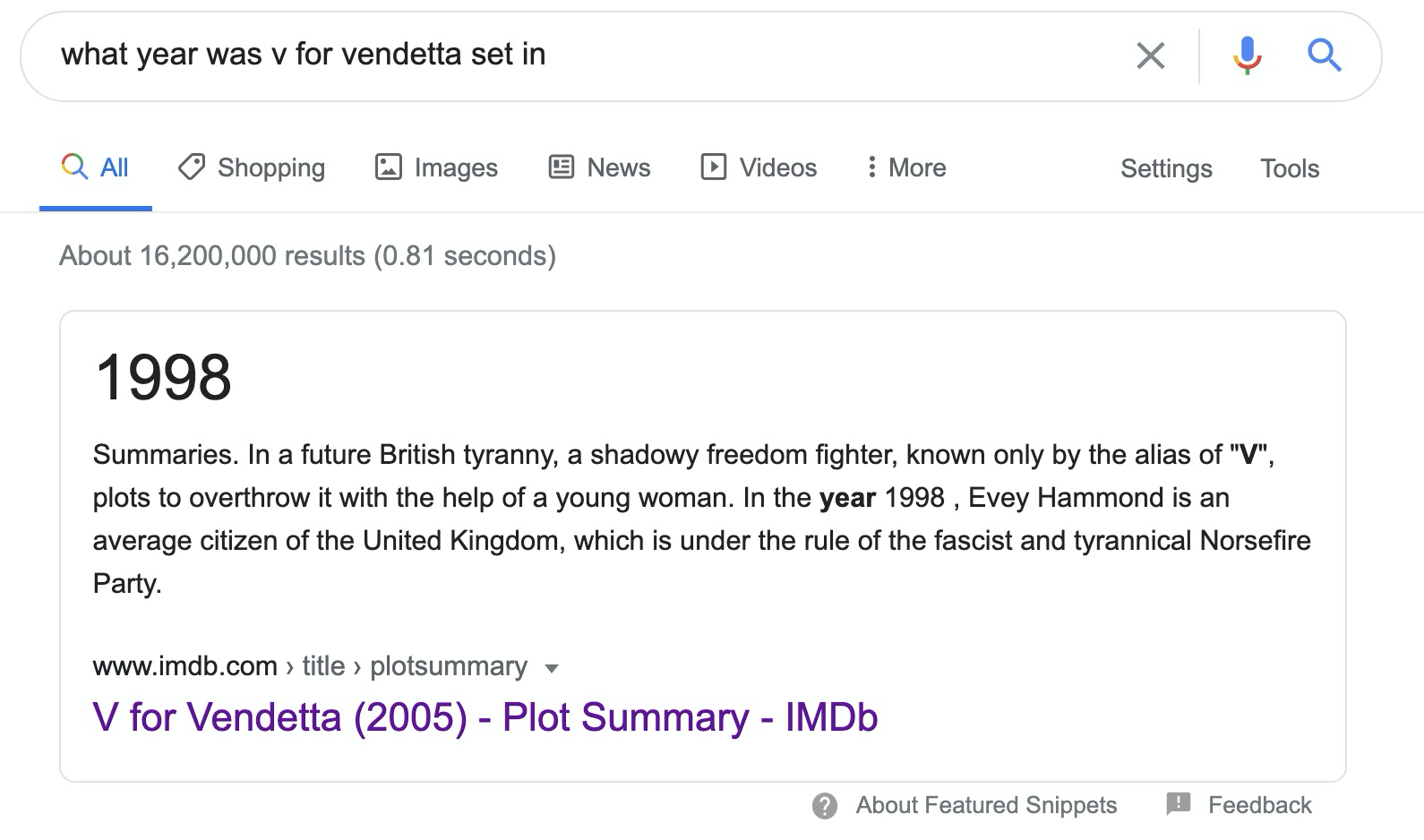 Listicles about the film often didn’t mention a specific year for its setting before the 2020 coronavirus pandemic, often vaguely referencing “a dystopian future.”

Is It About a Virus?

Another simple Google search returned a brief synopsis above links to other plot summaries for V for Vendetta, where the virus element isn’t emphasized at all:

Following world war, London is a police state occupied by a fascist government, and a vigilante known only as V (Hugo Weaving) uses terrorist tactics to fight the oppressors of the world in which he now lives. When V saves a young woman named Evey (Natalie Portman) from the secret police, he discovers an ally in his fight against England’s oppressors.

In June 2020, Screenrant revisited the plot of the film version of V for Vendetta, framing it in terms of all that had transpired since 2005:

When the coronavirus pandemic became a worldwide panic, audiences turned to Contagion. During the most recent Black Lives Matter protests, bookshops reported record sales of works by Black authors (while, unfortunately, Netflix noted a sudden uptick in viewer numbers for The Help). Now, as protests continue across America and worldwide in opposition to police brutality against Black citizens and the scourge of systemic racism, it shouldn’t surprise us that Netflix has been hyping V For Vendetta.

Part of what keeps the fascistic government of V For Vendetta’s 1980s Britain in power is a pandemic. A disease known as St. Mary’s Virus has ravaged Europe and killed over 100,000 people by the time the film starts. It is later revealed that the virus was an act of biological warfare by Creedy, the leader of the ruling Norsefire Party, which was then blamed on a terrorist group. The result of this massacre and subsequent fearmongering was an overwhelming majority in Parliament for Norsefire. It’s not exactly difficult to see why a dystopian thriller featuring a pandemic would prove so enticing right now. It’s partly why audiences turned in droves to Steven Soderbergh’s Contagion after the coronavirus became a worldwide concern.

However, that assessment drew from concerns during the time V for Vendetta was originally written as a graphic novel in the 1980s, and again at the time the adaptation appeared (on the heels of the U.S.-led invasion of Iraq):

The key difference, of course, is that Contagion takes a relatively realistic direction in showing how a devastating pandemic would likely originate and unfold worldwide, whereas V For Vendetta’s pandemic is an act of biological warfare. The latter taps into political concerns that were common in both the late-1980s, when the graphic novel was written, and the mid-2000s, when the movie was made. During the ‘80s, there was a consistent fear that the Soviet Union would utilize germ warfare against America as part of the ongoing Cold War. The Bush administration’s case for invading Iraq in the 2000s rested partly on the assertion that the country had never fully dismantled their biological arsenal, despite the Iraqis’ own claims that they had long abandoned this project. The ongoing COVID-19 pandemic has, as of the writing of this piece, claimed more than 456,000 deaths worldwide, a number that greatly eclipses that of V For Vendetta’s virus.

Again, that analysis existed through the retrospective lens of authorship in mid-2020, during an active pandemic. By contrast, a 2018 editorial about V for Vendetta‘s relevance in that year only uses the word “virus” once — and not in a literal manner referencing the actual virus in the film:

V for Vendetta is not merely a cautionary tale for our country’s political morass or trajectory — it is a retelling of events that have, in their fundamental essence, already occurred. Responding to the film a decade ago, Moore savaged the Wachowski sisters’ adaptation as “a Bush-era parable by people too timid to set a political satire in their own country.” But as it turns out, the Wachowskis didn’t need a CGI shot of the Lincoln Memorial exploding to make enduring commentary on the disease lurking in the heart of the American government. It has been encroaching for many decades now, festering and feeding on the worst bigotries of its citizenry, a virus of greed and inhumanity that has corrupted even the noblest intentions of our liberal democracy. Like Evey, we continue to endure each day’s fresh traumas, waiting in our cells for a new dawning; waiting for a time when, like Valerie, we will have our roses and apologize to no one; waiting for a day we know can only come after we decide we’d rather die behind the chemical sheds than suffer one more injustice.

As is often the case in retroactive assessments of pop-culture “predictions,” the claim that V for Vendetta was set in 2020 and was about a virus contained some truth, mashed up with a lot of Monday morning quarterbacking to make it look more prescient for attention and clicks. A virus was a plot element of V for Vendetta, but the virus was not the film’s central focus. Moreover, a 2006 review by Roger Ebert placed the film as set in 2020, but most other pre-2020 references don’t mention any year (or 2020 specifically). Although the meme wasn’t completely fabricated, it was also clearly created with the benefit of hindsight — which is, if you’ll pardon the dad joke, 2020.