The right-wing obsession with painting Barack Obama’s presidency as the first step toward a “New World Order” (in and of itself an old and baseless conspiracy theory) reached a peak with the disinformation surrounding a U.S. military joint training exercise during the summer of 2015.

Known as “Jade Helm 15,” the exercise ran from July to September of that year and involved troops from the U.S. Army, Navy, Air Force and Marine Corps working working in several states. But the spread of a planning document outlining the exercise led to another round of disinformation seeking to convince people that Texas, in particular, was about to be hit with “martial law.”

As The Guardian reported, the conspiracy theory stemmed from a slide showing that for the purposes of the exercise, that state (along with a portion of Southern California) would be presented as “hostile” territory: 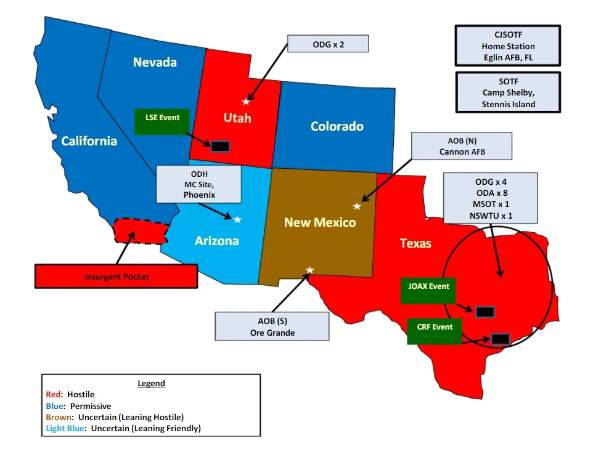 The weaponized narrative was promulgated by sources who should by now be familiar to anybody who follows the far right and its disinformation campaigns:

Noted radio host Alex Jones has covered the Jade Helm rumours intricately on his Infowars show and appears to be one of those who believe the exercise is a military takeover.

“This is just a cover for deploying the military on the streets,” Jones said. “I’ve hardly ever heard of something joint like this unless they’re planning an invasion.”

Other blogs pushed even harder on this angle; one invoked the familiar scare tactic of an “executive order” to claim that Obama was planning to strip Texas of its statehood:

Beginning July 1st, the Lone Star nation-state will be solely responsible for its survival and prosperity, however the United States will maintain a fleet of U.S. Navy destroyers and nuclear submarines in the Port of Houston. Additionally, the Department of State plans to erect a heavily fortified embassy there, allowing the Port of Houston and all its assets to remain on U.S. soil.

An authentic photo that spread online showed how far the conspiracy theories had spread; it showed a man, identified as Bob Welch, holding a sign during a public meeting in the town of Bastropo bearing the handwritten message “Don’t train on me, no Gestapo in Bastropo,” much the same way that inauthentically organized protests against topics such as masking and critical race theory took over school boards a few years later: 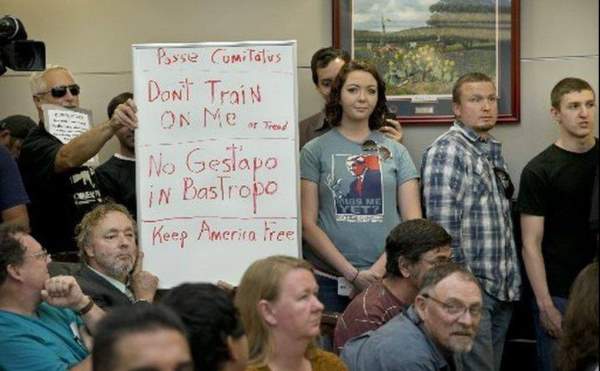 In response to the meeting, Texas governor Greg Abbott (R) directed members of the Texas State Guard to “monitor” the exercise, casting it as a move to give residents accurate information.

“It’s clear that people in Bastropo had questions,” Abbott said at the time.

But besides earning him ridicule from liberal media figures like Jon Stewart, even some of Abbott’s fellow Republicans criticized him; according to the Texas Tribune former GOP state lawmaker Todd Smith told him in a letter, “I am horrified that I have to choose between the possibility that my governor actually believes this stuff and the possibility that my Governor doesn’t have the backbone to stand up to those who do. I’m not sure which is worse.”

As The Guardian reported, the exercise did not produce any evidence of “martial law”:

None of President Obama’s jackbooted minions had mounted an assault on the Simply Sweet cupcake store on Bastrop’s main street, as of Wednesday afternoon. No Humvees were parked outside The Best Lil’ Hairhouse in Texas, which was still styling customers. A poster in the window of the tourist information centre promoted a seniors’ quilt raffle.

Though some men in sunglasses in a large black SUV with tinted windows and the word “Covert” on the license plate did pull up on Main Street and stride purposefully across the road, it turned out that they were going to a restaurant for lunch and “Covert” is the name of a local car dealership.

Three years after the initial outcry over Jade Helm, Michael Hayden — a former director of the Central Intelligence Agency — gave the issue new life when he said on an MSNBC podcast that he believed that “Russian bots and the American alt-right media” were behind the 2015 push to make Texans paranoid over a purported “government takeover.”

“At that point, I’m figuring the Russians are saying, ‘We can go big time,'” Hayden said at the time. “At that point, I think they made the decision, ‘We’re going to play in the electoral process.'”