Conservative Christians are trying to replace Halloween with "JesusWeen." 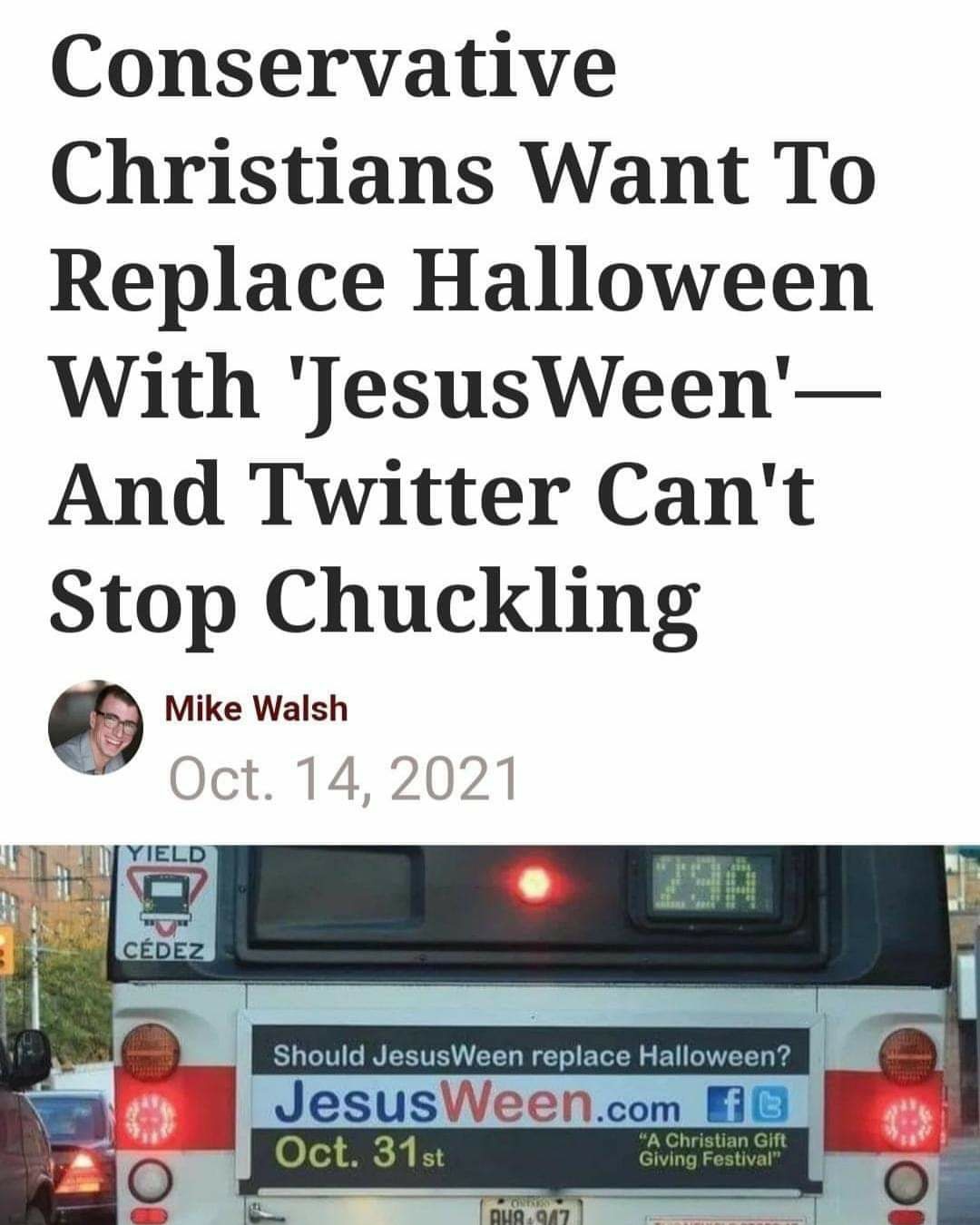 That screenshot and headline were from an October 14 2021 item on the George Takei-affiliated viral site ComicSands.com, which claimed:

Evangelical Christian can’t get enough of conservative Jesus—the judgy one—so they want to put him everywhere: on Starbucks cups, in schools and even in the ‘ween.

Yes, you read that correctly.

Halloween, also known as All Hallow’s Eve—the precursor to All Saints Day on November 1—is not hallowed enough for the likes of some Evangelical Christians.

Instead, they would prefer to transform the holiday into “JesusWeen.”

Meanwhile, as advertisements started showing up on city buses and making their way across North America, people couldn’t help but notice something a little too hilarious about the name “JesusWeen.”

Although the excerpt described advertisements “making their way across North America,” nearly all embedded content featured the same undated image. It was indeed an advertisement, displayed on the back of a public bus with Ontario, Canada tags.

Most iterations appeared to stem from an October 11 2021 tweet from @PastorTrey05, in which the image was featured:

…I beg your pardon??? pic.twitter.com/uH7V03lnKg

In all, we counted fifteen tweets embedded in the ComicSands.com piece, fourteen of which featured the exact same photograph of one single bus in Canada. ComicSands.com also embedded a YouTube video to corroborate the purported movement to change “Halloween” to “JesusWeen,” a CTV Canada segment titled “JesusWeen to Replace Halloween for some people.”

However, that video was published to YouTube by the channel “JesusWeen,” which had 42 subscribers as of October 19 2021. The clip was uploaded in July 2012, more than nine years before the tweet and ComicSands.com article appeared.

All visible comments seemed to have been posted after the viral tweet began circulating, not at the time the video was published nearly a decade prior. That video was also the most recent upload to the “JesusWeen” channel — suggesting that if a “JesusWeen” movement existed, it had already fizzled out nearly ten years before.

JesusWeen.com was registered in 2010, and the site appeared in 2021 to have been largely unchanged from 2011. A link pointed to a Wayback Machine copy of a Facebook page that was no longer available.

Likewise, a JesusWeen.com “press release” was hosted on the Wayback Machine, dated September 12 2011. It read:

October 31st is fast approaching and God has inspired us to encourage Christians all over the world to do it differently this year. We introduce to you the JesusWeen Christian gift giving festival which we hope will be an alternative for those who don’t celebrate or believe in Halloween. The dictionary meaning of Ween is to expect, believe or think. We therefore see October 31st as a day to expect a salvation gift or re-think receiving Jesus.

We strongly believe this initiative will be beneficial to all Christians, Churches and Christian Bookstores as well. It will have a positive effect and provide an alternative to millions of people. JesusWeen (October 31st) is expected to become the most effective Christian outreach day ever and that’s why we also call it “World Evangelism Day”. It’s a day to give out Christian gifts, just as God gave us Jesus.

No more hiding on October 31st…You can participate in a positive way. JESUSWEEN is all about spreading the gospel on October 31st. We are not supporting or endorsing the celebration of Halloween but we have chosen to use the only day in most countries that individuals are allowed to solicit, interact and exchange gifts without breaking the law. More info:

ComicSands.com’s viral headline claimed that “conservative Christians” sought to transform Halloween into “JesusWeen,” citing “city buses and making their way across North America” as proof of the effort. All information we located about JesusWeen seemed to peak in 2011 and trail off in 2012. A single image of a Canadian bus didn’t constitute “city buses making their way across North America,” and it wasn’t immediately clear why a seemingly abandoned “JesusWeen” concept lingered on an Ontario bus advertisement. Although we were unable to find older versions of the image, it was possible the photograph was shared long after it was taken. In any case, “JesusWeen” does not appear to be a broadly adapted religious movement.