Among memories considered part of the “Mandela effect” — a term for a shared false memory that stems from a collective, completely false understanding that Nelson Mandela died in prison in the 1980s — is a mass recollection of a since “missing” hiker emoji, an icon which those who recall it insist was a figure walking uphill with either one or two walking sticks:

The missing emojis. What do you remember? from MandelaEffect

The “Mandela effect” is a neologism coined to describe myriad collective “alternate memories,” one of the earliest being disagreement over recollections involving the death of Nelson Mandela. As mentioned, upon Mandela’s 2013 death a large number of people insisted he that had actually died in prison in the 1980s. (The phenomenon is also known as MMDE, or “mass memory discrepancy effect.”)

Mandela’s death was just the beginning of rumors involving collective misremembering, such as a widespread belief that the line “I see white people” appeared in the film Scary Movie. Overall, Mandela effect instances were chalked up either to false memories or (more intriguingly) interactions with parallel universes.

In the December 31 2019 Reddit thread above, the original poster counts a “missing hiker emoji” as a Mandela effect — something a large number of people seemed to recall, but ultimately a false memory. The user references a swordfish emoji as well as the hiker, as well as a sort of fossil record for emoji:

These [emoji] were not REMOVED. I have checked the history of emoji removals and changes! they simply never existed in our universe.

With respect to the “never existed” aspect of their claim, emojis are not random icons with a broad and untracked breadth of inclusion. Most people are used to using Apple or Android devices to insert emojis when typing, and those characters are specific and official. This means the person posting was indicating that remembering a nonexistent emoji could not be the work of a retired emoji simply falling out of use.

The missing hiker emoji was discussed on r/AskReddit in April 2018, albeit in a low-engagement thread:

What happened to the hiker emoji? from AskReddit

Five days later, an interested party wrote about the brief but interesting thread:

Somehow, the outdoors world has remained largely untouched by this cosmic snafu — until now. While combing Reddit, I came across a post from user babs2115 in the /r/AskReddit subreddit that gave me pause. It was a simple question:

“What happened to the hiker emoji?”

I knew exactly what babs2115 was referring to — a small picture available on most phones messages that depicts a person wearing shorts and a backpack with trekking poles. I remember a mountain in the background. And when I checked my phone to confirm, babs2115 was proven correct: It was gone.

The Mystery of the Missing Hiker Emoji

It wasn’t until I Googled the question for myself that I realized something was deeply wrong. There is no hiker emoji. And by all accounts, there never was.

Before we go further, if you remember a “hiker emoji,” try to see it in your mind’s eye. Do you simply recall the existence of such an icon, or do you remember a specific version (if you remember it at all)? Did it appear as something like this?

“It was like the walking emoji, but he had a backpack on and two hiking sticks. I can’t find it anywhere. I remember it so vividly.”

Although the thread didn’t get much traction on r/AskReddit, it predictably was far more popular when shared a few days later to r/MandelaEffect:

In that thread, even some claiming to be skeptical of the Mandela effect on the whole said that they vividly recalled the hiker emoji:

As a hard rationalist, I’m one of those people that is still totally convinced that the Mandela effect can always be chalked up to bad memory and widespread systems that influence memory (such as media); however I come here from time to time to read these posts for fun (because they really are) … This one however really has me scratching my head. I remember this emoji vividly and would even have estimated it to be from one of the earliest emoji set releases/updates. I recall a low-res version very specifically as well as a higher resolution (more recent) one.

For reference: I work in a technical field and am more than familiar with unicode, how it’s defined, and how it’s used. The first thing I did after seeing this post was check my phone, followed by the list on unicode.org. This is just weird!

I can’t think of any reason right now for this to be a commonly shared memory. I even looked through for emoji that we might collectively be misremembering as being this one, followed by non-standard “emoji-like” images that might have been used by a popular app or website at one point, but can’t find anything similar enough.

Another claimed they had previously used it with frequency in the course of promoting a related business:

My family has a hiking/camping apparel and equipment company and I️ run all the social media. In our original bio on instagram it said something along the lines of ‘your first stop for hiking (hiker emoji), camping ⛺️, yoga (yoga emoji) and fitness needs 🏋️! family owned and operated. Made in the USA 🇺🇸. ‘ I️ just recently ha to change it because the hiker and yoga emoji had been blacked out into little cubes like the Unicode was fucked, I️ originally thought it was my phone that I️ just hadnt updated but realized they had been taken off my keyboard so I️ changed it all completely and left out all emojis. I️ hadn’t even thought about this! I️ also had just assumed they’d been ‘discontinued’!!

A user also found reference to a missing hiker emoji on Twitter in 2013: 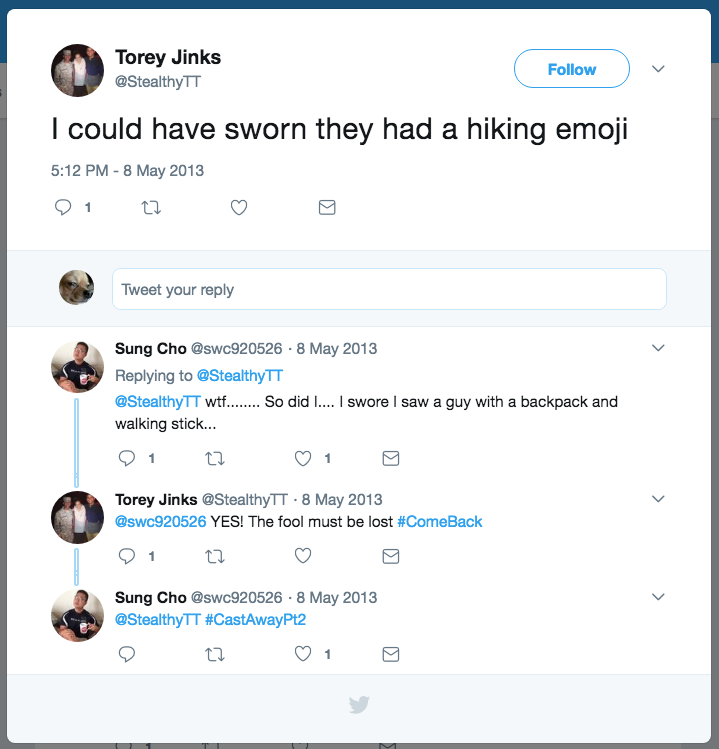 And before people started discussing a Mandela effect around a hiking emoji in 2018, users here and there tweeted about it disappearing:

Why did think there was a hiking emoji? 😳 always making them up in my mind 🙊

Poll: is there a hiking emoji?

I'm completely flabbergasted about there not being a hiking emoji man

wasn’t there a hiking emoji?

In May 2016, someone claimed that a hiking emoji was removed from the standard emoji set (as opposed to tweets which could be interpreted as simply pointing out that one didn’t exist); others mentioned looking for one:

Can't believe they took out the hiking emoji 😫😫😫

One tweet included a screenshot of a “climbing emoji” which resembled the missing hiker. In reply tweets, a user referenced a useless “hiking emoji.” According to a r/MandelaEffect moderator, the submission was relatively novel. But following the April 2018 Reddit threads, discussion of the missing hiker emoji were more common:

.@shanedawson Wait? Do you remember the hiking emoji? The guy with two sticks, red shirt and blue shorts? I do. Guess what? He never existed…#MandelaEffect

A Reddit user asked r/NoStupidQuestions about the missing hiker, and some commenters replied with speculation that the emoji existed in some sort of unofficial capacity. However, as far as we could see, no one found any icons of an “unofficial” hiker emoji to support that claim:

Did they remove the hiking emoji? from NoStupidQuestions

One theory about the widespread recall of a missing hiker emoji involved the game show The Price is Right. An icon of a man walking up an incline with a stick was proposed as an element of conflation, somehow managing to convince emoji users that a nonexistent hiking emoji once populated their keyboards. 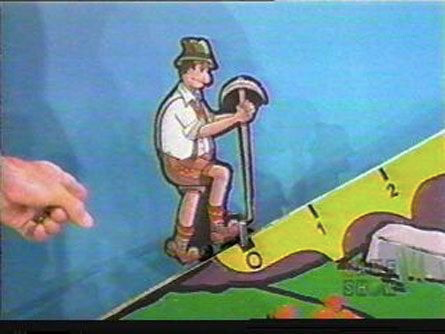 On Emojipedia, searches for “hiker” and “hiking” first returned a single emoji, one that looked nothing like the missing hiker emoji. It was a single boot. The latter search pulled up the same boot emoji, along with “walking” emoji — none of which resembled the missing hiker.

Others surmised the conflation purportedly happening was actually with a common trail icon: 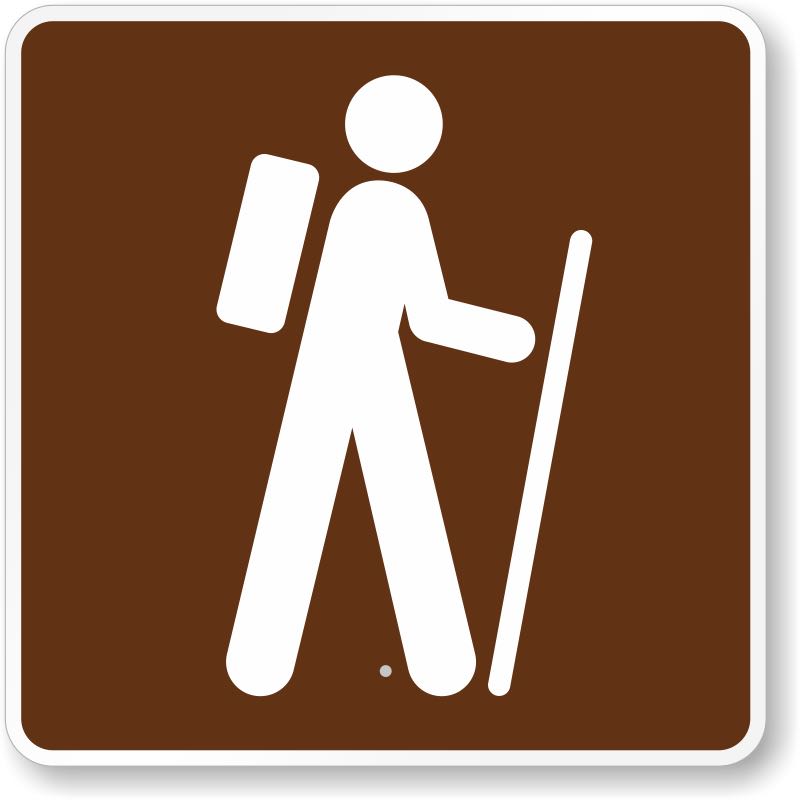 Another common proposal was that the missing hiker did exist once (as addressed above):

I definitely remember the Hiker. But didn’t know it went missing. My guess is that there was some type of update that got rid of him when people upgraded phones or something.

But, as noted earlier, that didn’t mesh with the perhaps surprisingly specific manner in which emoji functioned:

emoji are actually given unicodes, like the letters we type. once given a unicode, not likely to disappear ubiquitously like that… It’d be like if computers couldn’t print the character “w” one day… say everyone in the 2020s start just using the letter “u”, like “I uonder uhy?” I mean, just for example — it becomes an unused character. Its still not likely that a character given a unicode assignment would be deleted as programs or other things might now rely on it, and it’d be better to just leave it assigned its number, and just not use it user facing… but even still… Unicode characters just don’t vanish. As an example there was (is) a unicode character that is supposed to be a gun emoji. Most vendors now draw a space lazer, or water gun, or other toy in its place, but still a gun. I can’t imagine what you’d do the hiker. and that’s not even the problem: the problem is is that the hiker doesn’t exist in the unicode standard. It’s been sanitized, thoroughly, from any device. Even devices from 10+ years ago, people have looked for these symbols. I have a droid incredible from 2010: this emoji isn’t there. I have a galaxy s2, s4, s6, s5 note, none of them have it. it’s just gone – it never existed. that’s a mandela effect: we remember it, but it never happened (or happened in another ????? timeline? dimension?)

As for retired or updated emoji, those too are archived and represented. Emojipedia’s “Browse the Emoji Archives” page assures users they’re “not dreaming,” and certain emoji have changed appearance. However, the missing hiker is nowhere to be found. Notably, that resource provides examples of emoji rendering across both time and platform, illustrating the difference between 2010 and 2020 as well as between Apple and Android.

Similarly, Unicode’s full emoji list displays the difference between emoji across platforms, along with their assigned number: 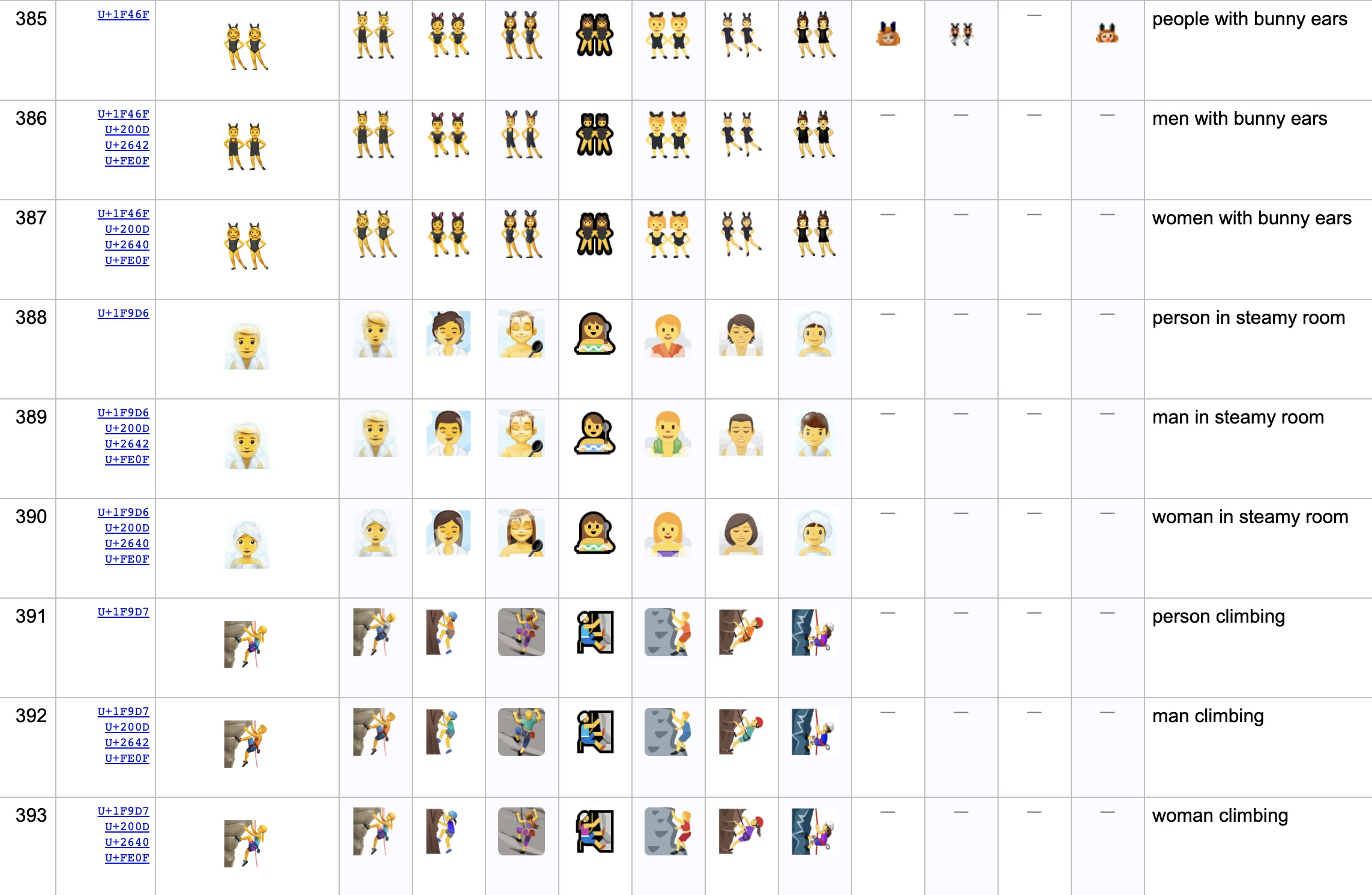 It is true that the missing hiker emoji was never part of Unicode’s emoji database. It is further true that users as far back as 2013 insisted they recalled an official hiker emoji, occasionally asking others where the icon had gone. Among theories about how so many people recalled a missing hiker emoji was the existence of a popular third-party emoji which was never a “real” emoji, but that theory relied on its relative ubiquity. To our knowledge, no one managed to turn up residue of the supposedly existent, but missing, hiker emoji.