William T. Kelley, one of Donald Trump's college professors, called the future United States president "the dumbest goddamn student I ever had."

The purported remark attributed to Wharton School of Business professor William T. Kelley — “Donald Trump was the dumbest goddamn student I ever had” — has been spread several times on Twitter, and was recirculated on Facebook by the liberal group “Occupy Democrats”: 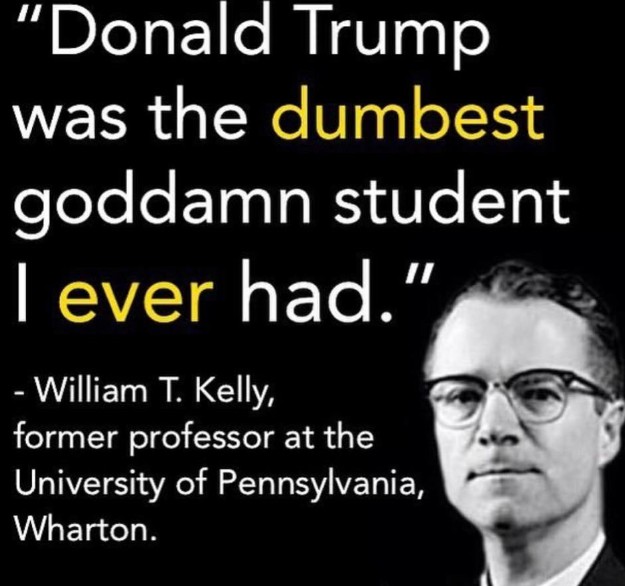 The remark was first brought to light by attorney Frank DiPrima in an op-ed for the left-leaning site Daily Kos in October 2017:

Dr. Kelley taught marketing management to both undergraduate and graduate students at Wharton. Dr. Bill was one of my closest friends for 47 years when we lost him at 94 about six years ago. Bill would have been 100 this year.

Donald J. Trump was an undergraduate student at Wharton for the latter two of his college years, having been graduated in 1968.

DiPrima maintained his account when interviewed by Philadelphia Inquirer magazine for a September 2019 story on the questions surrounding Trump’s time studying at Wharton:

It’s rare for a professor to disparage the intelligence of a student, but according to attorney Frank DiPrima, who was close friends with professor William T. Kelley for 47 years, the prof made an exception for Donald Trump, at least in private. “He must have told me that 100 times over the course of 30 years,” says DiPrima, who has been practicing law since 1963 and has served as in-house counsel for entities including the Federal Trade Commission and Playboy Enterprises. “I remember the inflection of his voice when he said it: ‘Donald Trump was the dumbest goddamn student I ever had!'” He would say that [Trump] came to Wharton thinking he already knew everything, that he was arrogant and he wasn’t there to learn.” Kelley, who passed away in 2011 at age 94, taught marketing at Wharton for 31 years, retiring in 1982.

The magazine also reported that, contrary to Trump’s boast that Penn was “one of the hardest schools to get into in the country,” the admissions officer who interviewed him (a friend of Trump’s father Fred, James A. Nolan) said that the school was taking 40 percent of all applicants. Nolan also described him as “definitely not a super genius.”