The phrase "eat the rich" was part of a longer quote about wealth inequality by philosopher Jean-Jacques Rousseau, as seen in a Tumblr screenshot.

In late January 2020, a meme about the popular phrase “eat the rich” began circulating on Imgur and Facebook in a long screenshot apparently taken from Tumblr:

In the screenshot were two Tumblr posts, the first of which was shared by u/asterosian on November 29 2019. In it, the user said they heard or read another person’s musings on the then in wide use phrase, emphasized below:

Do y’all know where the phrase “eat the rich” comes from or do you just repeat it cause you heard it elsewhere?

It’s not a bad thing, I just saw someone say “we never said who would eat the rich” and realized a lot of y’all might not have heard the full quote

It’s from Rousseau and it’s “When the people shall have nothing more to eat, they will eat the rich”

And, well, there’s a lot of people with nothing to eat…

A few days later on December 2 2019, u/insanityscribbles responded with what was ostensibly a transcription of the work referenced:

“We are starving. There is no more bread, and we have nothing to eat.”

“Not my problem you don’t work for your bread,”

as if he did not snatch away the grain by his own greedy hands and create filling bread for his own overflowing mouth.

“We are dying. There is no more medicine, and we’re all ill.”

“Not my problem you don’t take care of yourselves,”

the gods themselves would not

be able to reach.

and the rich man was satisfied…

Until they came knocking at his door one night;

their faces were sunken,

of the rich man’s

As they devoured his flesh,

Absent the poem, the claim appeared in on Reddit’s r/todayilearned on January 8 2018, linking to a Wikipedia page:

TIL the phrase "eat the rich" is attributed to Jean-Jacques Rousseau, who is reported to have once said "When the people have nothing more to eat, they will eat the rich." from todayilearned

That Wikipedia entry was in the form of a disambiguation page, leading to several pages of the same title:

Eat the Rich is an abbreviation of a saying attributed to Jean-Jacques Rousseau: “Quand les pauvres n’auront plus rien à manger, ils mangeront les riches!” (When the people shall have nothing more to eat, they will eat the rich). In contemporary culture it may refer to …

However, there was no citation provided, just a link to Rousseau’s page and an assertion the phrase was “attributed to” him. Similarly, Rosseau’s page contained a reference only in passing, at the bottom under “see also”:

Eat the Rich, a saying attributed to Rousseau

Iterations of the quote and attributions to Rousseau were not uncommon, but they were reasonably recent as of late 2019 and early 2020; before 2015, only a handful of results appeared in search results. One of the most prominent search results was an opinion editorial published by The Hill in August 2019.

Although the quote’s popularity didn’t pick up until around 2019, the earliest web citation we located was a Google Answers thread started in June 2005:

I’m looking for as close to the original source as possible of the phrase or concept ‘Eat the Rich’; the first pamphlet, book, newspaper article, or first reported demonstration where it was chanted, whatever the earliest source of this was. I’m looking for the Thomas Paine type that came up with this, so I can read whatever else he or she wrote.

Someone responding to the question located a citation in M.A. Thiers The History of the French Revolution in 1850, on page 359; that citation appeared elsewhere in an undated citation: 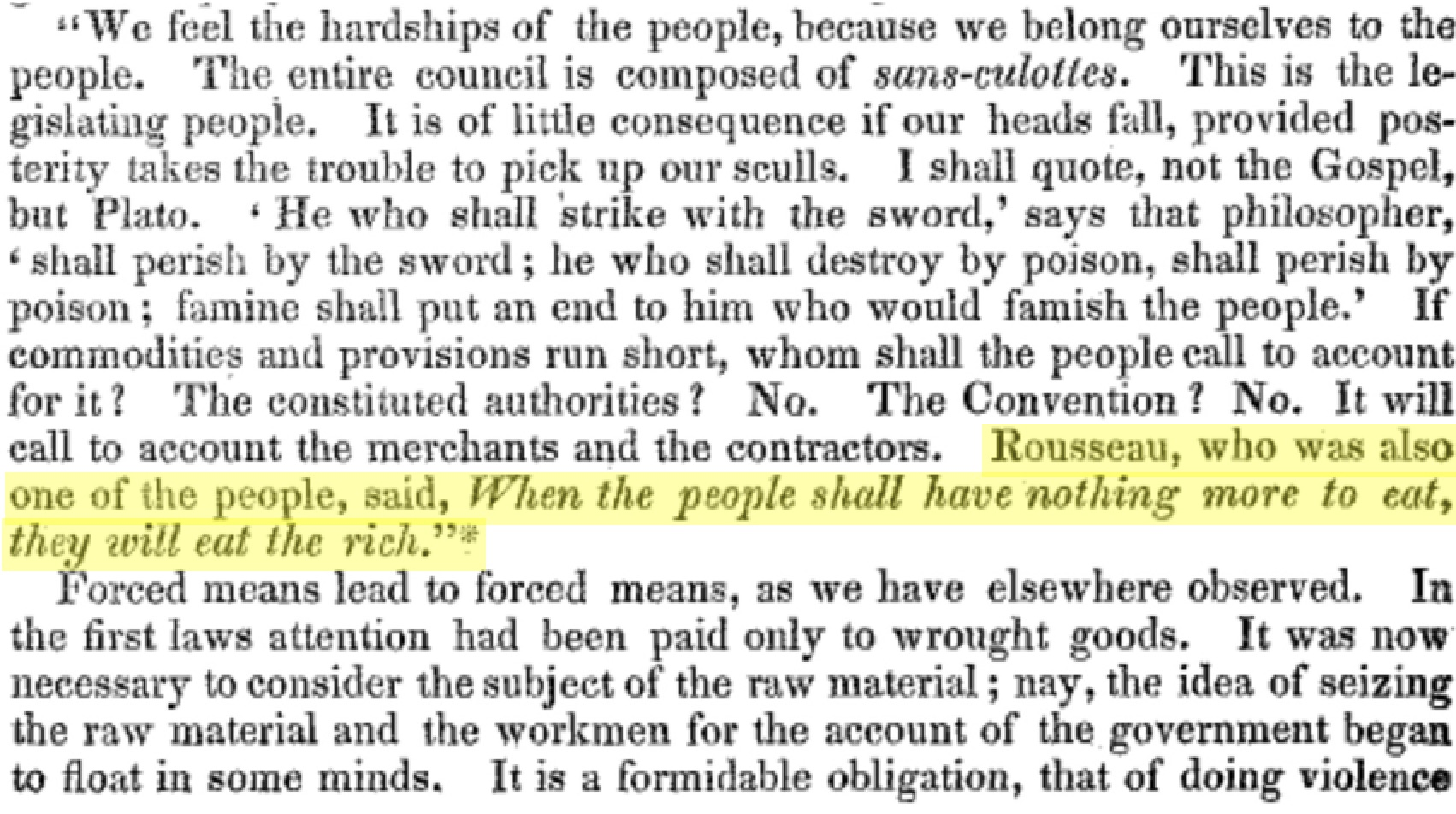 As for the poem in the second Tumblr post, we were unable to find anything other than misdated entries for it prior to late 2019. It appeared to likely be the work of the second Tumblr user, not Jean-Jacques Rousseau.

As early as 1850, Rousseau was quoted as saying “when the people shall have nothing more to eat, they will eat the rich,” but it may not have originated with him. Nevertheless, “eat the rich” — which was attributed to the philosopher as early as 1850 — was a trope in its own right, and it did appear to echo  historic commentary attributed to Rousseau. As for the poem circulating in screenshot form, it appeared to be far more modern, likely written by a Tumblr user in 2019.