An image in June 2021 shows a century-old rhododendron and the woman who planted it.

On June 10 2021, the Facebook page “Happy Garden” shared an image with text reading “100 year old rhododendron and the woman who planted it”; the same image was shared to Imgur on June 15 2021: 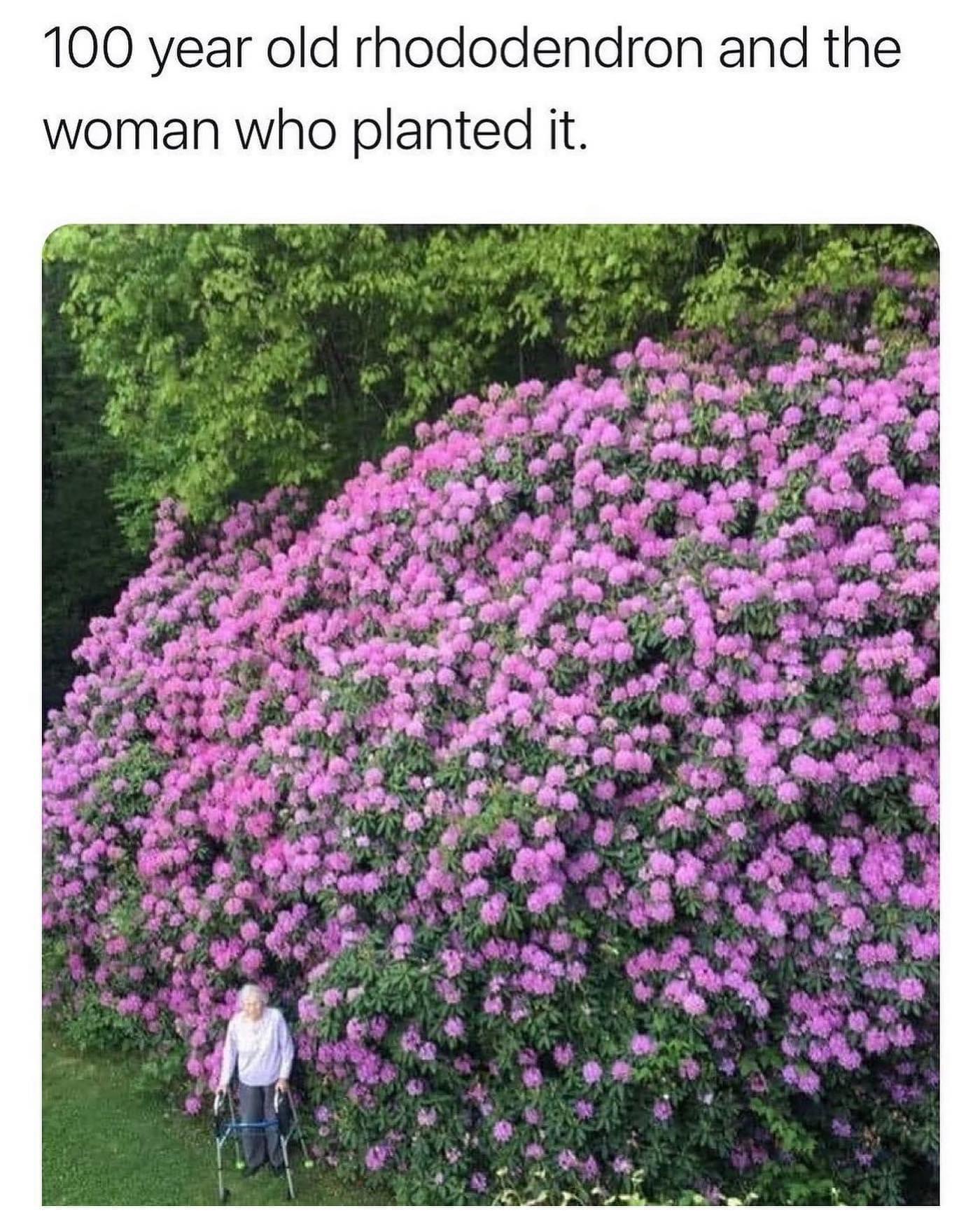 In the format widely seen across platforms, the image showed a woman using a walker, dwarfed by an extremely large flowering bush. Typically, the image’s who, what, when, where, or why aspects was not addressed — nor were inherent questions about the age of the woman at the time the bush was planted.

On Imgur, the most upvoted commenter voiced the latter point:

Others joked about the framing of the 100 year old rhododendron posts:

You don’t really get into gardening until the kids leave the nest. She’s probably 150 or 160

A reverse image search immediately demonstrated that even if the image was accurately described (despite a suspicious lack of context), the post itself was not new. It performed exceptionally well across subreddits in 2021 — shared to r/BeAmazed and r/aww in early June 2021.

Top comments on the second post also pertained to the stated ages of the woman and the rhododendron:

In the response, u/Thereaper29 claimed that the woman was 113 years old when the photograph was taken, but they did not cite a source. Their submitted post linked only to the image, not to any documentary evidence about its subjects.

The image was shared to Reddit no fewer than three times in 2020 — twice to r/NatureIsFuckingLit, and once to r/nextfuckinglevel. Between the two iterations on the first subreddit, the title picked up details:

🔥 Hundred year old flower bush, and the woman who planted it! from NatureIsFuckingLit

Again, only images were linked — not information about the location or identity of the woman or the age of either the woman or the bush. Another extremely popular iteration shared to Twitter on June 7 2021 included a reply claiming the woman planted the rhododendron when she was a teenager, but again, no information was included with the claim:

100 year old rhododendron and the woman who planted it. pic.twitter.com/1Wx06EYcmk

not sure how more people aren't confused by this impossible timeline and just going with it…. there's literally no way this could be true unless she's like 115 years old

The earliest iterations were crawled on TinEye (which allows sorting by earliest date) were the May and June 2020 Reddit threads linked above. Like the first Reddit thread, a May 2020 post (“100 year old rhododendron bush”) on a gardening forum simply described the plant as “a 100 year old rhododendron,” without claiming the woman in the image was the one who had planted it.

Searches often led to 2018 news stories about a rhododendron (famed due to its age) being damaged, but images of that bush didn’t seem to match up to the “and the woman who planted it” posts that surfaced later.

According to that December 2018 article, the old rhododendron was not planted by the woman in the photograph:

The plant, estimated to be between 115 and 120 years old, is more than nine metres tall, eight metres wide and when in full bloom during a three-week period in May, has more than 4,000 pink blossoms.