Amid ongoing discourse about rising gas prices in the United States on March 9 2022, an Imgur post purportedly showed a photo of a gas station displaying prices of $6.09 a gallon for regular, $6.23 for “plus,” and $6.29 for “supreme”: 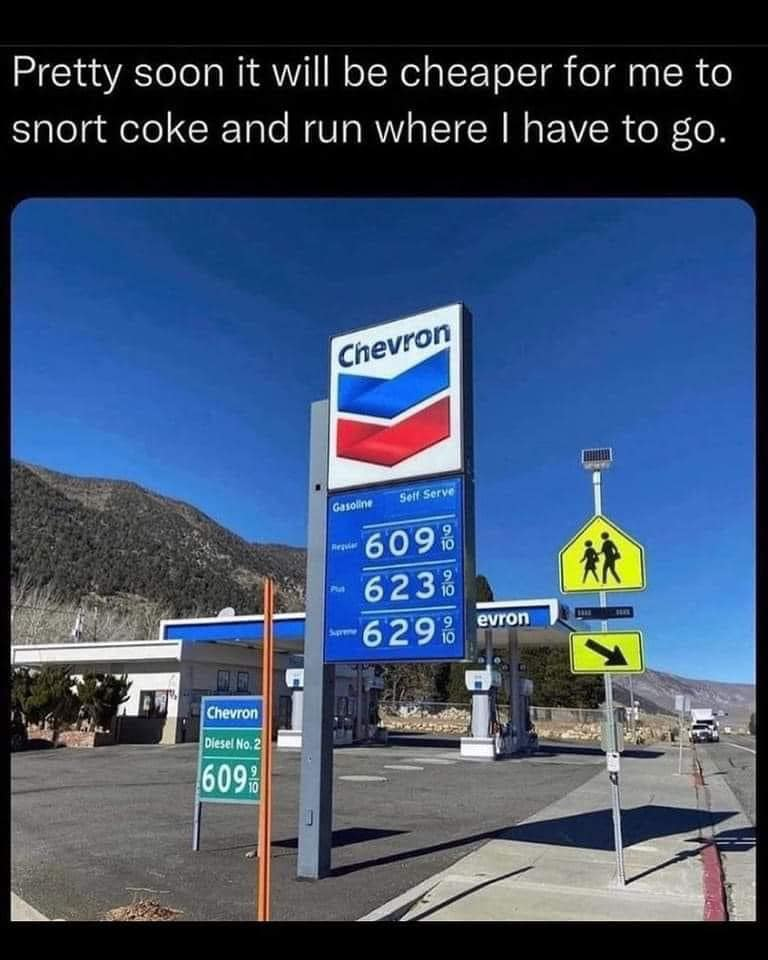 Pretty soon it will be cheaper for me to go snort coke and run where I have to go.

A Google search for “Pretty soon it will be cheaper for me to go snort coke and run where I have to go” did not return the original content itself. However, we found an identical iFunny.co post from November 27 2021. A reverse image search using TinEye returned crawled iterations of the image in chronological order. The image was first crawled on November 21 2021, about a week before the iFunny.co post was shared.

That initial match involved a November 21 2021 Wall Street Journal article, “Think Gas Prices Are Too High? In This California County, a Gallon Costs $6.” The image was at the top of the article, and a caption read in part:

A Chevron station in Lee Vining, in California’s Mono County, sold regular gas for $6.09 a gallon [in November 2021].

The article began with descriptions of similarly high gas prices in parts of California in November 2021:

When Miguel Lujan needs gasoline for his truck, he gets it in Carson City, Nev., located 80 miles from his hometown. It’s worth it, the store clerk and roller-derby player says, to pay one-third less than the local average of nearly $6 a gallon.

California currently [in November 2021] has the highest gas prices in the nation, an average of $4.70 a gallon of regular unleaded, according to AAA. Gasoline prices in the U.S. were up 50% in October [2021] from the same month last year [2020], amid rising inflation.

The most expensive gas in California is here in Mono County, a 13,000-person tourist destination on the border with Nevada that is home to the Mammoth Mountain ski resort. The average price for a gallon of regular unleaded is $5.66 [in November 2021], according to AAA.

In Bridgeport, a town of about 550 that serves as the county seat, the two gas stations were selling regular unleaded for $5.95 and $5.99 a gallon last week [in November 2021]. In the nearby town of Lee Vining, which serves as a gateway to Yosemite National Park, a gallon of regular cost $6.09.

In the article, the Wall Street Journal reported that in November 2021, a gallon of regular gas cost $6.09 in Lee Vining, California, and that Mono County’s gas prices were the highest in the state of California at the time. According to price comparison site Gas Buddy, on March 9 2020, gas prices in Mono County, California ranged from a low of $5.49 in June Lake to a high $6.49 per gallon in Lee Vining and Bridgeport.

A popular March 2022 Imgur post about gas costing $6.09 per gallon was not actually from 2022; it was published by the Wall Street Journal in a November 2021 article about gas prices in and near Mono County, California. GasBuddy.com data for March 9 2022 demonstrated a similar range of prices in the area at that time, but the old image did not reflect a novel increase in gas prices influenced by later events, such as Russia’s invasion of Ukraine.