A Facebook user captured a photograph at the gym showing a firefighter (sometimes #LoganTheFirefighter) in full work gear, climbing 110 floors to honor the firefighters who died on September 11 2001.

In late August 2021, a September 2018 Facebook post recirculated — purportedly a candid image captured at a gym, depicting a firefighter “on the stair climber in full equipment” ascending 110 floors in memory of the firefighters killed on September 11 2001.

Iterations of the 9/11 Stair Climb Image

Saw a pretty amazing thing tonight at the gym. This firefighter was on the stair climber in full equipment, including his mask and oxygen tank. After about a half hour, I saw him finishing and taking his gear off so I went over to tell him how much I respected what he was doing. I figured he was training for a firefighter exam, but when I commented on it, he exclaimed, “110 floors! Took me 30 minutes, 10 seconds.” 110 floors… OMG. It’s September 11 and he had just climbed the equivalent of 110 floors like the firefighters did in the World Trade Center. Apparently, this is a tradition that many firefighters do to honor the 343 firefighters who lost their lives in the line of duty that day. It’s a helluva tribute! #110floors #september11 #neverforget

An image showed the man described in the post. His jacket read “ATFD,” possibly Abington Township Fire Department in Pennsylvania: 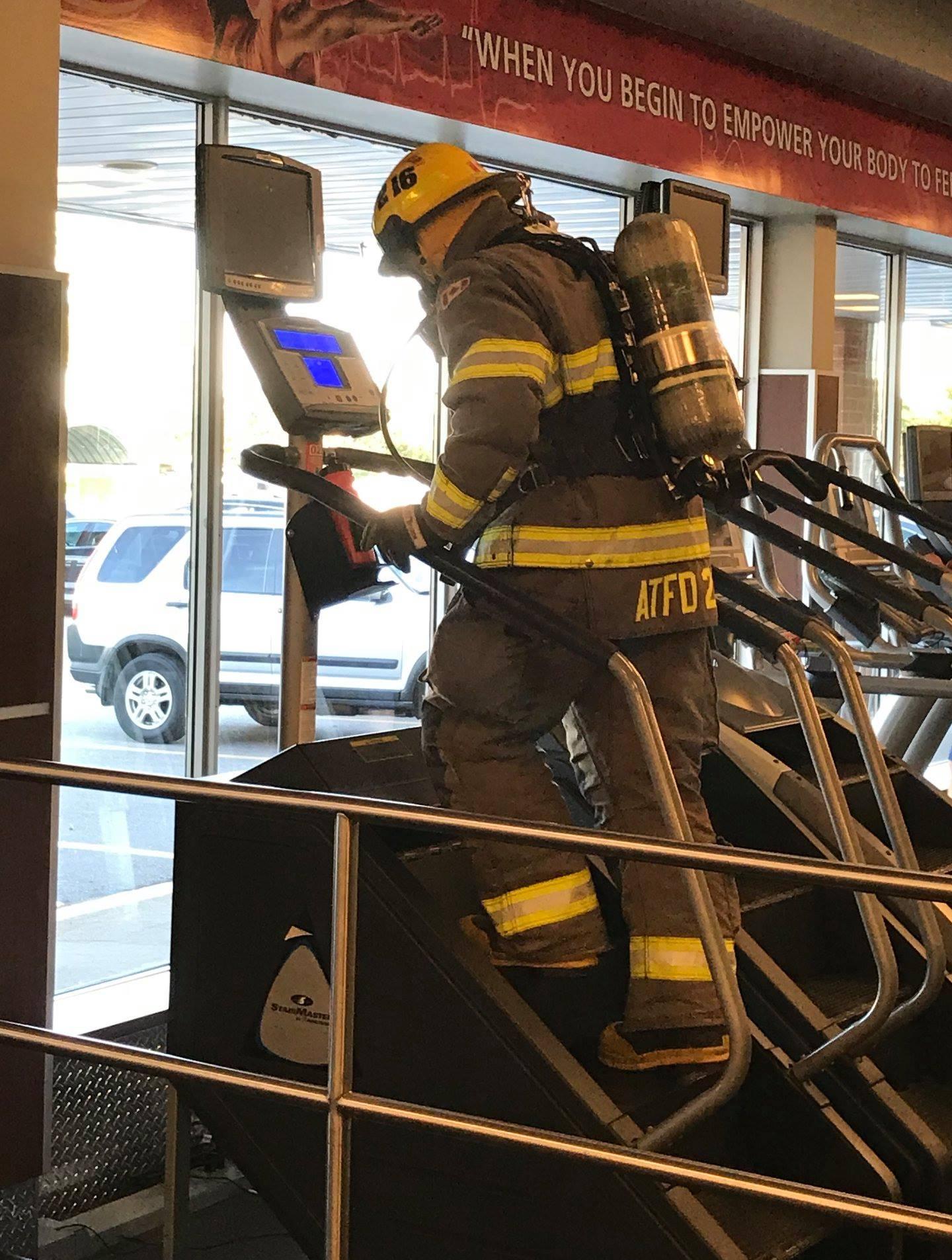 ATFD Firefighters took to the stair climber this morning in honor of our fallen brothers and sisters from 9/11, with the Fire Chief finishing the 110th floor to complete the climb. Thank you to Anytime Fitness for welcoming us in. Several people exercising cheered us on!!! 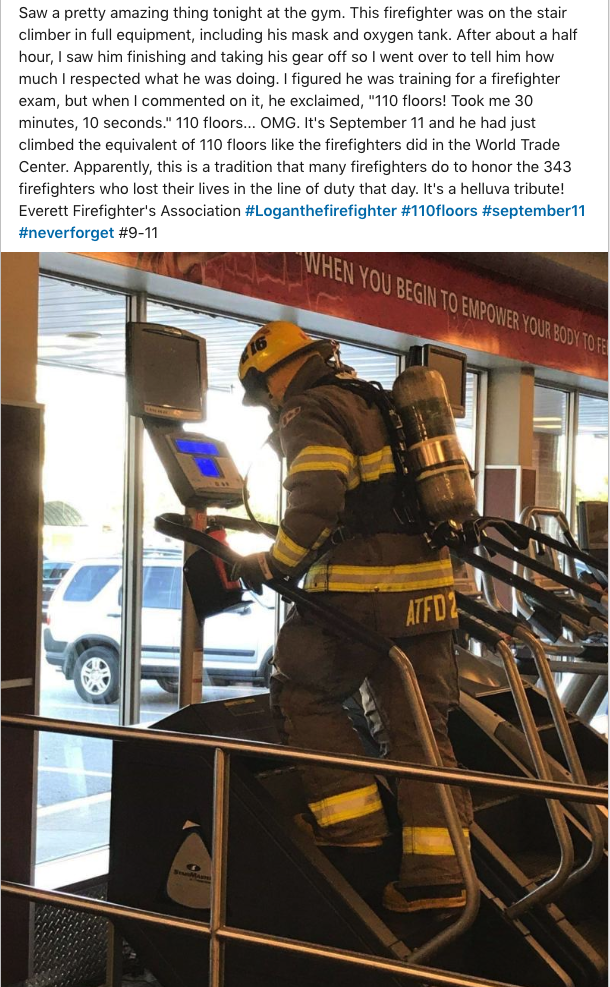 Not long after that, yet another variation appeared, this one as an eyewitness account shared to Reddit’s r/quityourbullshit, a subreddit where users share social media claims of questionable veracity. It was shared to that subreddit due to the fact that so many accounts had presented the image and anecdote as their own; a separate person shared the image without the Facebook post to r/pics in September 2019:

All for the LinkedIn likes…. from quityourbullshit

Facebook’s #LoganTheFirefighter hashtag displayed primarily posts in which various accounts shared the story as if they had witnessed the event and photographed it personally.

The 9/11 Stair Climb Treadmill Tradition, As Told on Social Media

On September 12 2016, BuzzFeed published an article (“This Photo Of A Firefighter Climbing Stairs At The Gym On 9/11 Has People Emotional”), which described yet another separate Facebook post by Planet Fitness employee Lezlie Bauler:

This man asked if it was okay for him to climb 110 sets, fully suited, of stairs in honor of his fallen brothers and sisters for 9-11. Yes sir, you can. I am not one to get emotional, but a few tears were shed. Thank you for your services.

A different image showed a firefighter on a treadmill “fully suited”: 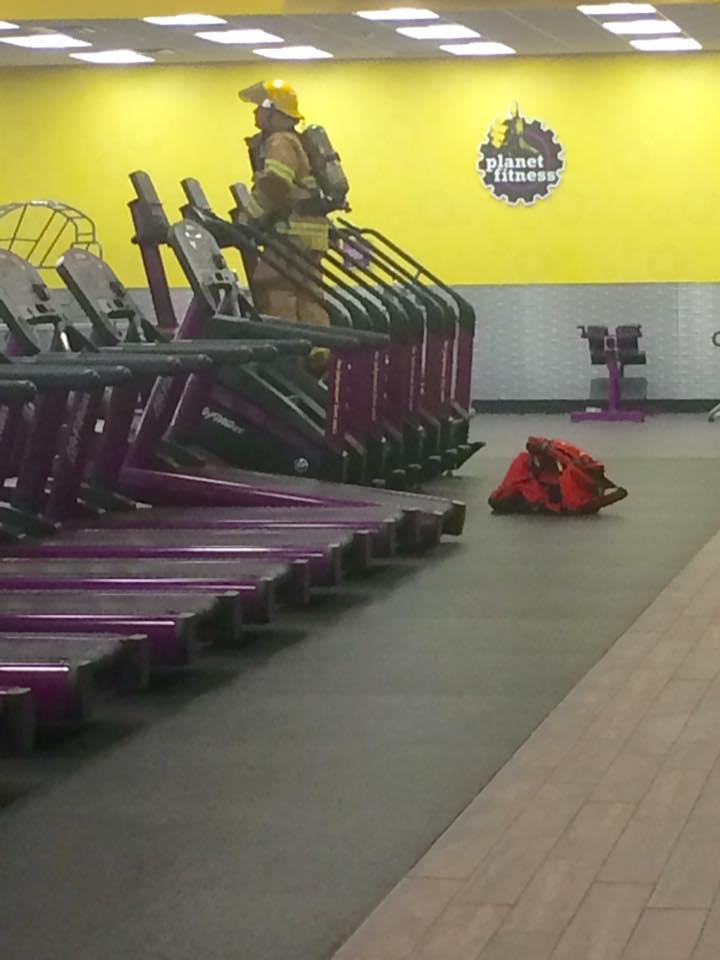 A popular iteration of a different gym and different firefighters was shared by Facebook user Chelsea Renee Farmer on September 11 2018. That post was slightly older than the still image post above, and independent of the popular #LoganTheFirefighter image and post.

On September 12 2020, a Facebook user shared a different image to r/HumansAreMetal, describing the stair climb in firefighter gear as a tradition:

This morning, Mike Bruno continued his tradition on 9/11. Climbing 110 flights of stairs in full gear to honor the firefighters who lost their lives. from HumansAreMetal

On September 15 2020, a Twitter user shared the 2018 Facebook version of the story, but refreshingly, they did not present it as a first-person sighting:

"Saw a pretty amazing thing tonight at the gym. This firefighter was on the stair climber in full equipment, including his mask & oxygen tank. After about a half hour, I saw him finishing & taking his gear off so I went over to tell him how much I respected what he was doing.1/ pic.twitter.com/EYOpnGzE47

On August 21 2021, a “scanner” blog shared the text of the post and image, without attribution.

9/11 Treadmill Stair Climbs in the News

Farmer’s Facebook footage (linked above) generated news coverage, including a September 11 2018 CNN article, “Around the nation, firefighters in full gear walked up 110 flights of stairs to honor those who died in 9/11.”

CNN reported that the “ritual” seen on social media was widespread among firefighters:

At exactly 8:46 a.m. every September 11 – the moment when the first hijacked plane struck the Twin Towers in 2001 – firefighters around the nation begin their ritual.

In stadiums, public buildings and, in some cases, on the StairMasters at their gyms, the first responders walk up 110 flights of stairs – dressed in full firefighting gear.

It’s a tradition meant to honor the 343 firefighters who lost their lives in the line of duty that horrific day. The 110 flight-climb is meant to simulate the heroic distance those fallen men and women had to travel inside the World Trade Center that day.

The challenge takes place on a stair climber, and participants have to see how quickly they get up 110 flights of stairs. On September 11, 2001, firefighters at the scene of the attack in New York City hurried up 110 flights on stairs in the World Trade Center towers to rescue survivors.

The idea is for participants to get even a small taste of the daunting task facing those first responders. “Even though the task is by no means anywhere close to how hard it was for those firefighters in all their gear — with the temperature rising as they were running up the stairs, knowing they may not come back down — it still gives them a chance to get on those stair climbers,” said [Mike King, the owner of Workout Anytime franchises]. “They also start to think about the people who did lose their lives on that day.”

In September 2019, Pennsylvania’s WNEP’s “Scranton Firefighters Climb for Those Lost on 9/11” reported:

Members of the Scranton Fire Department took the treadmills in a show of solidarity on this September 11 [2019].

The firefighters climbed 110 stories in full gear at Crunch Fitness in the Marketplace at Steamtown in Scranton.