A 1960 recipe for homemade baby formula can be safely substituted for commercial formula.

An April 26 2022 Facebook post featuring an emergency “homemade baby formula” recipe spread virally on platforms as a baby formula shortage worsened — and as experts pleaded with parents not to experiment with diluted or homemade formula.

As of May 12 2022, the post in question had an alarming 145,000 shares. An additional status update further claimed that the recipe was perhaps “healthier” than modern commercial formulas:

For anyone who knows anyone needing baby formula due to the shortage! A recipe from 1960 that I am willing to bet is healthier than what they’re making it with now.

An attached photograph showed a recipe for homemade formula on a discharge document from 1960: 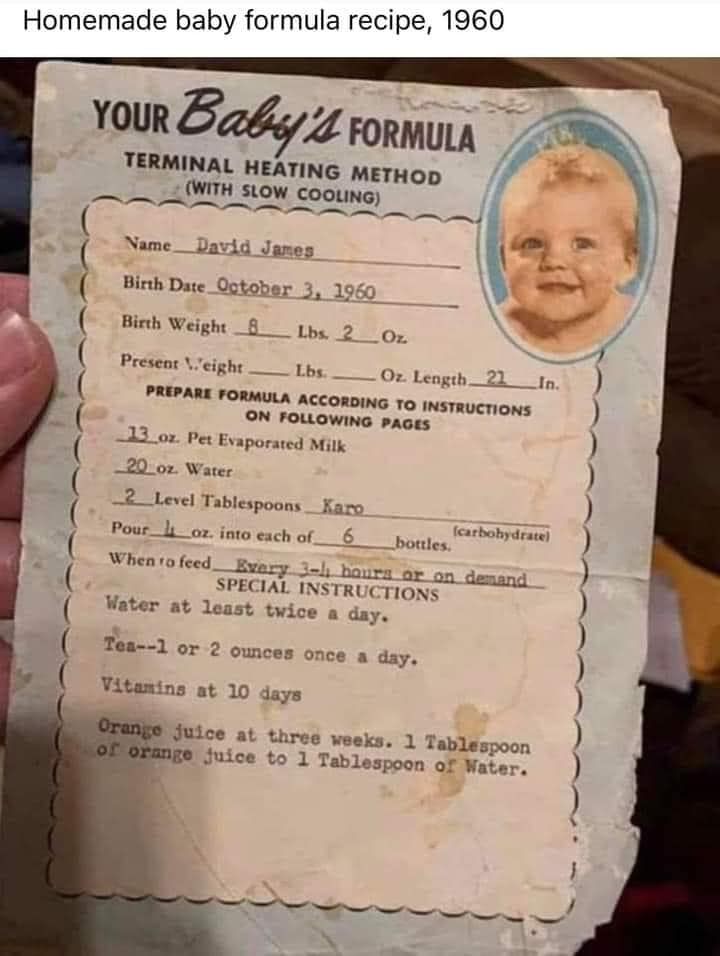 Text at the top of the screenshot read “Homemade baby formula recipe, 1960.” In the photograph, an apparent hospital document featured a title: “Your Baby’s Formula, Terminal Heating Method (with Slow Cooling.)”

Vital statistics appeared at the top for a baby named David James, born on October 3 1960. Under that, a section labeled “prepare formula according to instructions on following pages” featured the following recipe:

In addition to a 62 year old recipe for “homemade formula,” the document included other recommendations that were eyebrow-raising by 2022 standards. Special instructions included “tea” and “orange juice at three weeks.”

In that reporting, we mentioned concerns that homemade baby formula would be considered by desperate parents:

Camila Martin, a registered pediatric dietitian with UW Health, said, “So if this is diluted with water, this can actually be really dangerous to an infant.”

Martin says store-bought formula goes through a rigorous process in order to get FDA approval. But she adds, “homemade formulas can be quite dangerous, and have resulted in hospitalizations for patients that I’ve seen in the past.”

When we searched for information about the evaporated milk and Karo corn syrup recipe, Google’s “Highlight” section featured recipes for homemade baby formula. No warnings were attached to that section, despite the ongoing shortage of formula: 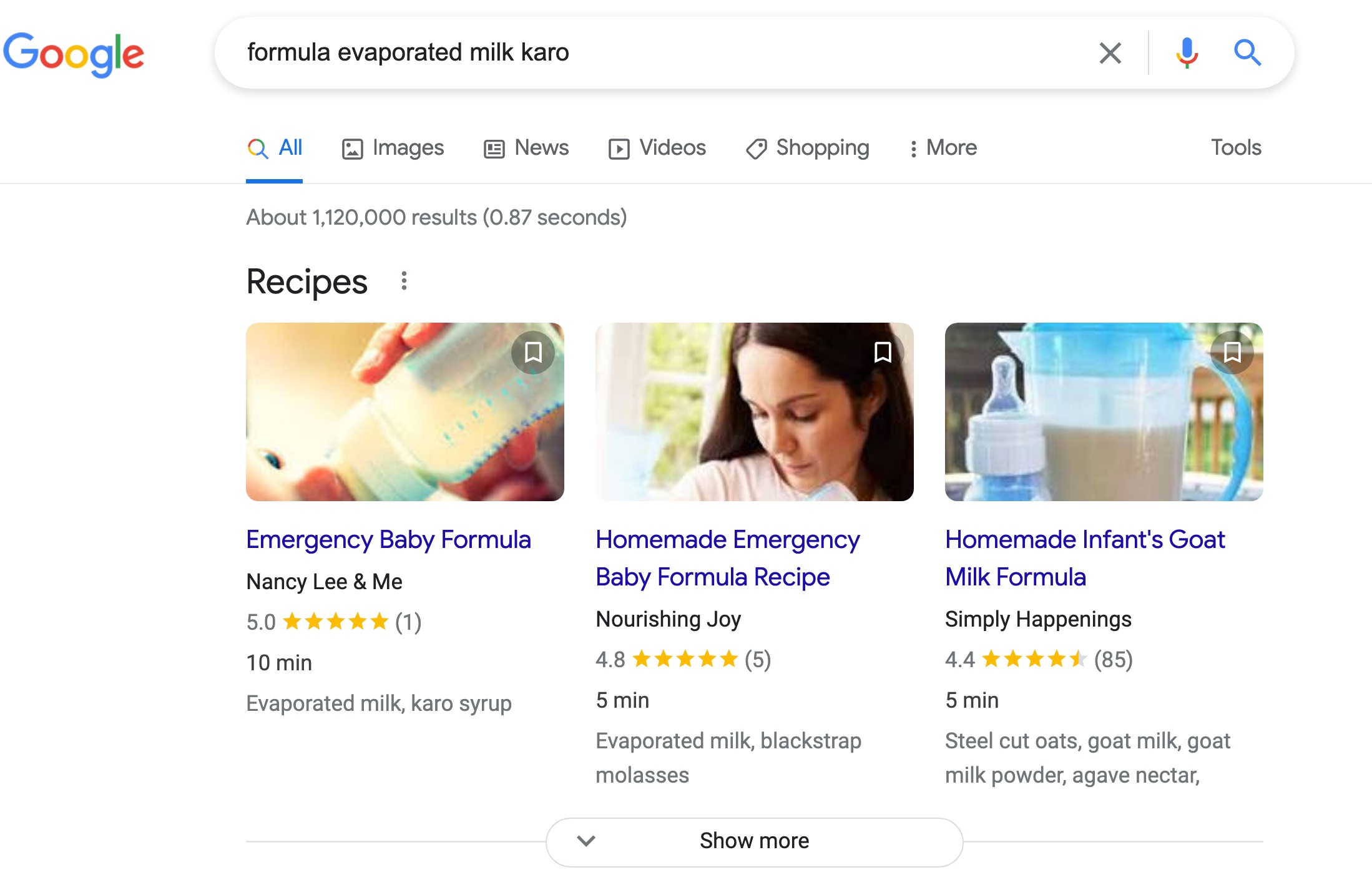 However, Google News searches led us to articles warning parents to avoid homemade formula recipes. A May 9 2022 WBMA article quoted a registered dietician, who cautioned against the recipes and explained:

Doctors and dieticians say while options are scarce, making your own baby formula should not be one.

“The top concern for me is that they may be missing out on certain nutrients that the FDA insures is in every can or container of formula,” said Lauren Manaker, a registered dietician.

“These homemade formulas made with the evaporated milk and Karo syrup did provide calories and some nutrients to the infant, but now as infant formula has progressed and we have so many options and so much research, manufacturers have gotten so close to what breast milk is without being breast milk,” said Manaker.

Manaker also noted that contamination was a very real risk when making homemade formula. On May 5 2022, KFOR quoted Dr. Catherine Mims of Oklahoma Children’s Hospital on the subject of a 1960 formula recipe (likely the recipe shown above.)

Mims referenced “vitamins” and “orange juice” as “definitely no longer recommended,” and explained how the recipe was risky for infants:

“If you were a pediatrician 40 to 50 years ago, the recipe that is kind of going around with condensed milk was the recipe that we used because there weren’t that many available formulas … Condensed milk doesn’t have the same amount of protein and sugar that comes in breast milk or in formula as well as it has none of the micronutrients,” said Mims.

Most importantly, Mims says making formula at home is something that could easily become dangerous.

“The problem with condensed milk and with the recipe is more the electrolyte balance and the water balance,” Mims said.

“Unfortunately, babies under six months old, they have pretty immature kidneys and don’t handle water that well. Which is why you should not give any babies free water. As you’re making this recipe, if you get it wrong, you could be causing a lot of problems with that electrolyte balance in your baby.”

“Homemade formula is dangerous for babies,” said Dr. Katie Lockwood, an attending physician at Children’s Hospital of Philadelphia Primary Care. “Regular formula is F.D.A.-regulated and held to very high standards, the same way we treat medications. Making it at home is a lot riskier.”

“The nutrients in homemade formulas are inadequate in terms of the critical components babies need, especially protein and minerals,” said Dr. Steven Abrams, a spokesman for the American Academy of Pediatrics. The group has “strongly” advised against homemade formulas.

Such formulas can also contain an excess of minerals or nutrients, like salt, which a baby’s developing kidneys or liver may be unable to break down. Even the amount of water used in D.I.Y. recipes poses a potential risk.

“The big concern is the balance of the nutrients and the liquids that are added, because if those are not right, that can set up a situation where the baby might get too much water,” said Dr. Suzette Oyeku, chief of academic general pediatrics at the Children’s Hospital at Montefiore, in New York City. That can cause a condition known as water intoxication, which can lead to dangerous complications like seizures in young babies.

As far back as March 2020 (when shortages were new), Romper.com published “Guys, You Can’t Make Baby Formula With Karo Syrup, Despite What Facebook Says,” which inaccurately surmised that formula would not be in short supply. However, experts shared the same concerns:

“It is extremely rare for a parent in a developed country to be unable to find formula, as formula companies have a comprehensive crisis management system in place,” says Jody Segrave-Daly, RN, IBCLC, cofounder of the Fed Is Best Foundation, in an interview with Romper. She cites Similac’s crisis management statement as an example.

So these experts feel that the buzz around DIY formula isn’t necessary at this time. But if the apocalypse really were to strike and no formula could be found, Segrave-Daly says the World Health Organization (WHO) has formula replacement guidelines, but they need to be followed precisely in order to be safe. Also, the American Academy of Pediatrics (AAP) doesn’t agree with them.

“In the event you find yourself in a dire emergency without formula and your baby needs fed, The World Health Organization has guidelines,” she says. “Possible breast milk substitutes include commercial infant formula, liquid animal milk — cow or goat, powdered animal milk, and evaporated milk. Each milk source has specific instructions that include adding boiled water, sugar, and a daily micronutrient recipe according to the age of the baby. All other kinds of milk are unsuitable for small infants. The AAP does not recommend any homemade formula and provides resources for parents to contact.”

That framing was clearly outdated regarding the formula shortage in 2022, but the advice remained useful — contacting a pediatrician remains the best course of action before resorting to homemade formula.

An April 2022 “homemade baby formula” recipe from 1960 had an alarmingly high share count as of May 12 2022, and people sharing the post commonly claimed it couldn’t hurt — or worse, that homemade baby formula made from corn syrup was somehow purer than modern formula. Experts across the United States urged parents not to experiment with homemade baby formula despite the short supply of it in stores. As we noted earlier, parents without formula were desperate. In that circumstance, contacting a baby’s pediatrician before using alternatives like homemade baby formula remained the safest option.

We have contacted the American Academy of Pediatrics for comment, and will update with further information.