This striking difference seems intended to illustrate how vastly wealthy “billionaires” truly are — and how conflating millionaires with billionaires is inherently faulty. It seems that the specific “July 24th” and “1988” numbers originated with an August 5 2019 thread published to r/AskReddit — “What is a true fact so baffling, it should be false?”

A highly-upvoted comment made on that day used those specific dates in time to illustrate the point. The comment has since been edited, but remains more or less in the same format:

Comment from discussion What is a true fact so baffling, it should be false?.

In their edited comment the user leaves original and updated calculations, revising the “billion seconds” date from 1988 to November 1987:

ed: Made some rounding errors. We’re looking at November, 1987.

A separate user lifted the claim and uploaded it as a new thread in r/ShowerThoughts (removing it after other users exposed it as a repost):

From there, the comment inspired additional reposts across social media, identifiable as such thanks to the use of similar time-based references:

A million seconds ago was the last week of July.

A hundred billion seconds ago was 1000 BC.

A trillion seconds ago Neanderthals became extinct (30,000 BC).

Five trillion seconds ago the homo sapians population was potentially as small as 2000. pic.twitter.com/lkHlkTxOPT

A million seconds ago was two weeks ago

A billion seconds ago was 1988

Those tweets, shared one day later, changed “July 24th” to “the last week of July” to partially address the claim going quickly stale, as roughly two weeks passed between that date and the date of the Reddit comment, rapidly altering the accuracy of the post. Based on the math used in the August 5 2019 comment, the “million seconds” date would be around July 31 2019, one week later.

That, however, is assuming the claim is correct. A similar meme shared to me.me in April 2017 featured radically different calculations, placing one billion seconds prior in 1959, not 1985 or 1986 — a difference of nearly three decades: 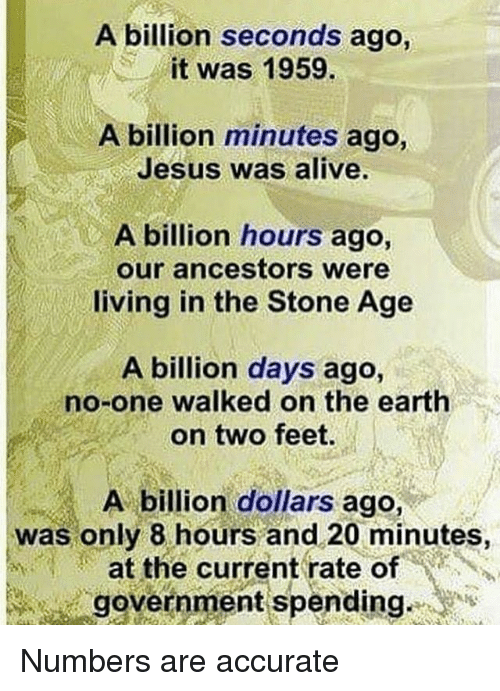 The text of the older meme appeared to have a specific focus, illustrating the purported growth of America’s national debt at some point before the meme was created:

A billion minutes ago, Jesus was alive.

A billion hours ago, our ancestors were living in the Stone Age.

A billion days ago, no-one walked on the earth on two feet.

A billion dollars ago, was only 8 hours and 20 minutes, at the current rate of government spending.

In October 2017, the claim appeared on r/ShowerThoughts, asserting that a million seconds was 11 and a half days, and a billion was roughly 31 years:

And a September 1986 letter to the editor in the New York Times made similar claims about millions, billions, seconds, and the national debt:

JUST HOW LONG IS A TRILLION SECONDS?