Attorney Alan Dershowitz said in November 1974 that he was "not happy seeing [Richard] Nixon's gang being tried by blacks and liberals in the District of Columbia."

A November 1974 remark from attorney Alan Dershowitz found new visibility in January 2020 after it was highlighted by the chief of staff for Virginia state Sen. Dave Marsden, not long after the Trump administration announced that Dershowitz would be joining his impeachment defense team.

Matt Rogers posted a photograph of Dershowitz with the quote, “I’m not happy seeing [Richard] Nixon’s gang being tried by blacks and liberals in the District of Columbia.”

This is what Alan Dershowitz said in 1974 about the Nixon impeachment. pic.twitter.com/KkGrqiOLsn

Journalists quickly verified the excerpt, noting that it was initially published by the Associated Press on November 21 1974. Matt Novak, editor of the blog Paleofuture, posted a photograph of Dershowitz that ran alongside the story in a New Jersey newspaper: 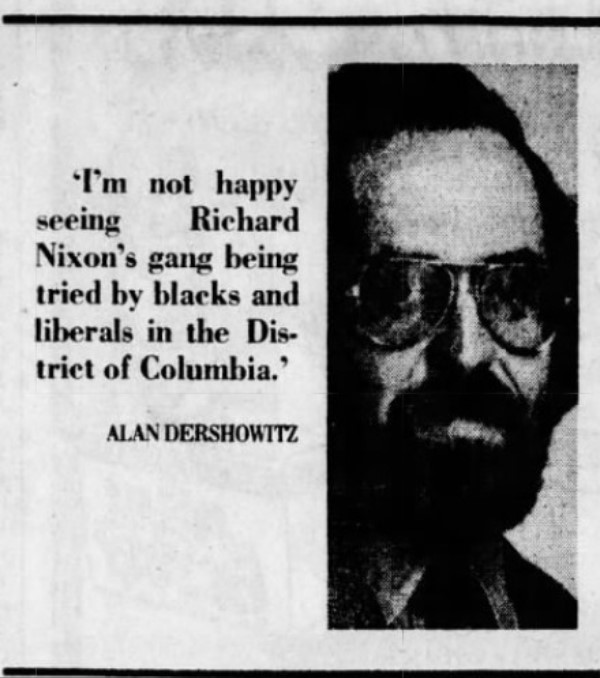 At the time, Dershowitz — who, as mentioned, is currently representing United States President Donald Trump in his own impeachment trial — was not commenting on the impeachment of Nixon but rather the criminal trial against seven of his aides; the story itself by AP reporter Guy Darst dealt with the effects that highly-publicized cases can have on a defendant’s chances of receiving a fair trial. 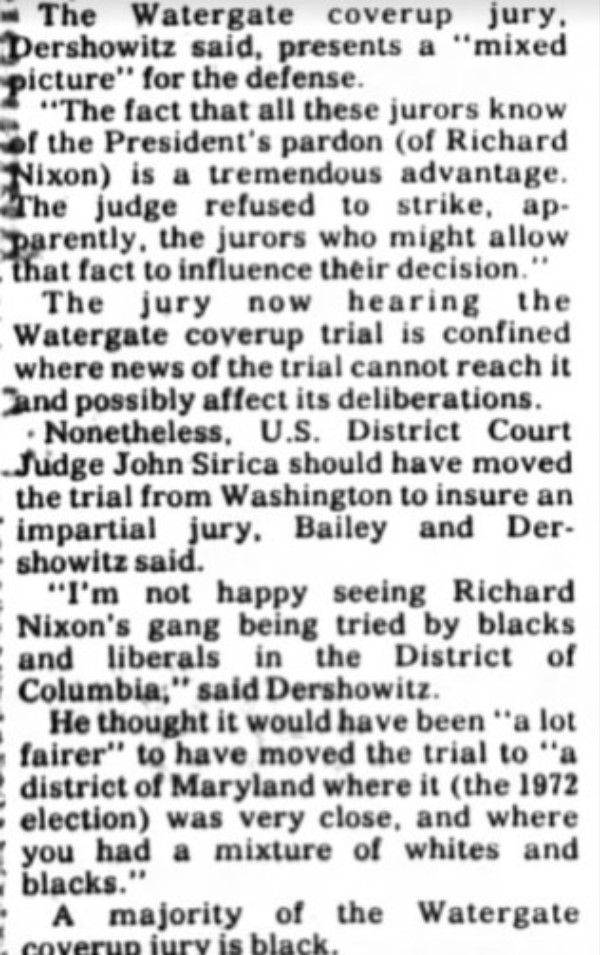 According to the story:

The Watergate coverup jury, Dershowitz said, presents a “mixed picture” for the defense.

“The fact that all these jurors know of the president’s pardon (of Richard Nixon) is a tremendous advantage. The judge refused to strike, apparently, the jurors who might allow that fact to influence their decision.”

The jury now hearing the Watergate coverup trial is confined where news cannot reach it and possibly affect its deliberations.

Nonetheless, US District Court Judge John Sirica should have moved the trial from Washington to insure an impartial jury, [F. Lee] Baily and Dershowitz said.

“I’m not happy seeing Richard Nixon’s gang being tried by blacks and liberals in the District of Columbia,” said Dershowitz.

He thought it would have been “a lot fairer” to have moved the trial to “a district of Maryland where it (the 1972 election) was very close, and where you had a mixture of whites and blacks.”

A majority of the Watergate coverup jury is Black.

Three of the defendants in the Watergate cover-up trial — ex-Attorney General John Mitchell, as well as H.R. Haldeman and John Erlichman, who worked in Nixon’s administration as his chief of staff and domestic policy advisor respectively — were convicted on charges of conspiracy, perjury, and obstruction of justice. In all, 41 people were convicted in connection with the Watergate scandal, over which Nixon resigned from the United States presidency on August 8 1974.

Another Twitter user pointed out that Dershowitz revived his 1974 claims in August 2017, when he argued in radio interviews that special counsel Robert Mueller could gain a “tremendous tactical advantage” by impaneling a grand jury in Washington, DC.

“The case now can be brought not in northern Virginia, which is a swing area, sometimes Democrats and sometimes Republicans, but the District of Columbia, which is always solidly Democratic and has an ethnic and racial composition that might be very unfavorable to the Trump administration,” Dershowitz told WABC-AM.

He doubled down on his argument even further in an interview with WBUR-FM host Meghna Chakrabarti.

“Are you saying at all that you think that African-Americans cannot faithfully and impartially do their jobs on a Mueller grand jury or any subsequent trial jury that might involve members of the Trump campaign?” Chakrabarti asked.

“But this is an investigation about Russia — about possible collusion, about maybe even espionage. I mean, if we were talking about police shootings it might matter,” Chakrabarti responded.

“And I have a bridge to sell you in Brooklyn if you believe that,” Dershowitz insisted.