On November 29 2022, an Imgur account shared a text-based image containing the claim that a county in Arizona is refusing to certify the results of the November 2022 midterm election: 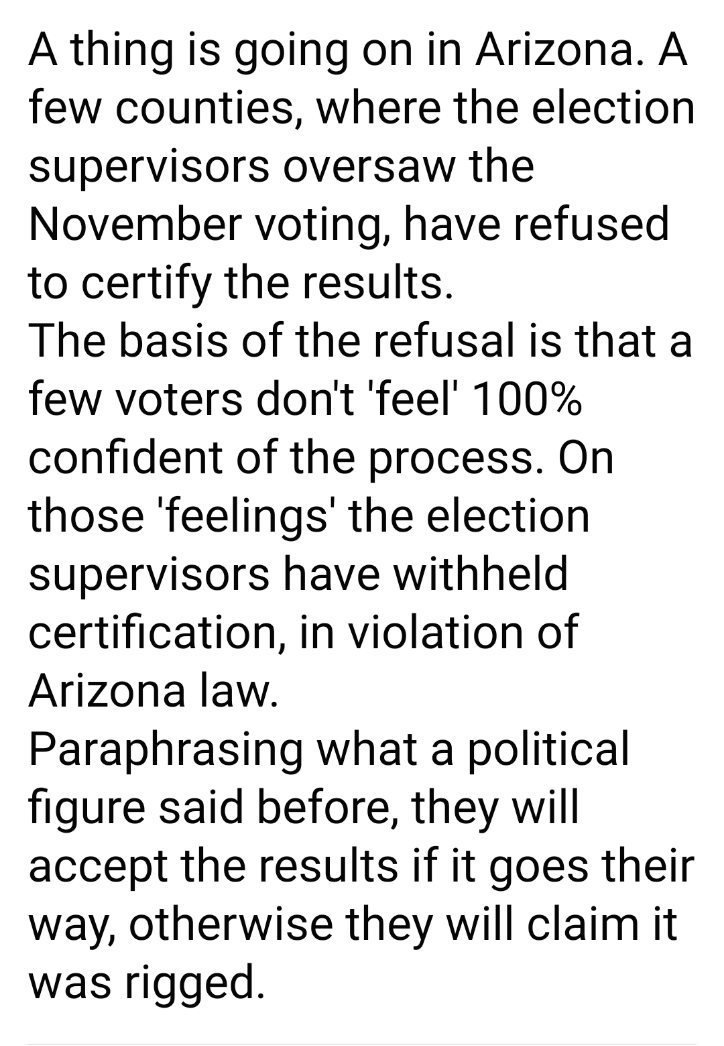 A thing is going on in Arizona. A few counties, where the election supervisors oversaw the November [2022] voting, have refused to certify the results.

The basis of the refusal is that a few voters don’t ‘feel’ 100% confident of the process. On those ‘feelings’ the election supervisors have withheld certification, in violation of Arizona law.

Paraphrasing what a political figure said before, they will accept the results if it goes their way, otherwise they will claim it was rigged.

No source for the text in the image was provided by the submitter, nor did they include additional information (such as the name of the county) or corroborating links.

While the November 29 2022 Imgur post lacked details about the purported refusal to certify by an Arizona county, a popular November 28 2022 post to Reddit’s r/politics provided some context, including the name of the county, Cochise:

It linked to an Associated Press article with the same headline; the page had apparently been updated since publication. It began:

Republican officials in a rural Arizona county refused Monday [November 28 2022] to certify the 2022 election despite no evidence of anything wrong with the count, a decision that was quickly challenged in court by the state’s top election official.

Text of the Imgur post described “feelings” on the part of a “few voters,” purportedly causing the delay. The Associated Press story elaborated on that, referencing vague “concerns over the certification of ballot tabulators,” adding that failure to certify would “flip the victor in at least two close races”:

The two Republican county supervisors delayed the canvass vote until Friday [December 2 2022], when they want to hear once more about concerns over the certification of ballot tabulators, though election officials have repeatedly said the equipment is properly approved.

State Elections Director Kori Lorick wrote in a letter [in November 2022] that [Arizona Secretary of State Katie] Hobbs is required by law to approve the statewide canvass by next week [early December 2022] and will have to exclude Cochise County’s votes if they aren’t received in time.

That would threaten to flip the victor in at least two close races — a U.S. House seat and state schools chief — from a Republican to a Democrat.

A November 28 2022 NPR article focused on a few county-level certification spats, including the one in Cochise County. It mentioned two county supervisors, Tom Crosby and Peggy Judd, and “claims about the certification of election equipment”:

Officials in rural, Republican-controlled Cochise County of southeastern Arizona, near Tucson, voted to delay certifying the results of this year’s midterm elections and to miss the state’s legal deadline of Monday [November 28 2022], despite finding no legitimate problems with the local counts.

“There is no reason for us to delay,” said the Democratic chair of the county’s board of supervisors, Ann English, whose vote was outnumbered by the county’s two Republican supervisors, Tom Crosby and Peggy Judd.

Republican supervisors in Cochise County cited claims about the certification of election equipment, which Kori Lorick, Arizona’s state election director, confirmed had been tested and properly certified. Still, Crosby and Judd have called for a meeting on Friday [December 2 2022] to discuss the claims.

On the same date, the Cochise County Herald/Review published “Judd, Crosby again delay canvass,” providing more detail about Crosby and Judd’s opposition to certifying the election results. It excerpted the letter from State Elections Director Kori Lorick, which accurately described the “concerns” as “baseless conspiracies” about vote tabulation and equipment:

Judd and Crosby said they want to further discuss the allegations of improper machine tabulation certification and decided to hold another meeting on Friday, Dec. 2 [2022] …State Elections Director Kori Lorick has previously threatened the county with a lawsuit if the canvass is not approved by Monday, Nov. 28 [2022].

She stated in a letter last week to the supervisors [Crosby and Judd], “These claims are derived from baseless conspiracies about Arizona’s equipment certification process. Cochise County’s election equipment was properly certified and remains in compliance with state and federal requirements.

“You voted to delay certification of the county’s 2022 General Election canvass and requested more information about false claims concerning the county’s election equipment. These claims are derived from baseless conspiracies about Arizona’s equipment certification process. Cochise County’s election equipment was properly certified and remains in compliance with state and federal requirements …”

On November 28 2022, Arizona secretary of state Katie Hobbs tweeted pages of a lawsuit filed by her office against the officials in Cochise. Hobbs said the suit was filed to “ensure all voters have their votes [counted]”:

Cochise County had a statutory duty to certify the results of the 2022 General Election by today. My office has filed a lawsuit to ensure all voters have their votes county. ⬇️ pic.twitter.com/NXCXWjeQQi

A November 22 2022 Votebeat.org article about the controversy further detailed the officials’ refusal to certify the results, describing aggressive, coordinated efforts to undermine elections:

Cochise supervisors’ decision to put off certification appears to have been at least partly influenced by people who live outside those counties, including some activists involved in a failed movement to throw out 2020 election results. Those activists have revived claims they made unsuccessfully in 2020 —that vote-counting machines weren’t properly certified — even though the Arizona Supreme Court rejected that claim in September [2022].

On Friday [November 18 2022], Cochise County supervisors voted to postpone their vote until Nov. 28 [2022], after hours of coordinated public comments that appeared to have been orchestrated by three individuals who made similar claims in 2020: Phoenix resident Paul Rice, Maricopa city resident Daniel Wood, and Brian Steiner, who did not tell the board where he lives. Supervisor Peggy Judd said she wanted to do more research on their claims about vote-counting machines before finalizing the results, adding that she has a hard time trusting “any computer.”

“I don’t even trust my cell phone, and it’s a flip phone, and I don’t trust it. It doesn’t always give me results, it’s not always there for me. So, it’s a difficult thing,” she said.

January 2021 reporting by the Tucson Sentinel indicated that Judd had “deleted” her Facebook account after engaging in the spread of election conspiracies and participating in the January 6 2021 insurrection:

A Cochise County supervisor deleted her Facebook profile and is facing calls to resign after she touted conspiracy myths associated with the QAnon movement and posted about her participation in the January 6 march on the U.S. Capitol that became a deadly insurrection … Judd also raised alarm among some in the Cochise community with her consistent promotion of unfounded conspiracist statements about the November election and the attack on the Capitol. An investigation by the Sentinel found that Judd and a member of her family apparently exchanged QAnon material around the time of their involvement in the events in Washington.

Just days after the riot, Judd removed both her personal Facebook profiles, as well as the Facebook page associated with her public office.

In fact, the January 6 “Stop the Steal” rally attended by Judd (a former state representative) and members of her family reached its culmination when an insurrectionist mob, called to the Capitol and urged to action by then-President Trump, forcibly seized the seat of the legislative branch of the federal government in an attempt to stop congressional acceptance of the results of the November 3 presidential election of President Joe Biden.

That reporting quoted Judd on her presence amid the attack:

“I didn’t think there was anything weird about marching on the Capitol,” said Judd, who had been publicly promoting false claims relating to the integrity of the presidential election for months prior to the January 6 event. “In fact, while I was walking there, about to die because I’m old and not in such good shape, I was actually thinking, ‘this is kind of like, you know, like marching for our rights and our freedom’ — I kind of almost felt like it was equal to the Martin Luther King march.”

Judd’s activities and commentary were described at length by the Sentinel in that January 2021 reporting, which also briefly touched on Judd’s participation in the January 6 2021 Capitol insurrection:

“Well, what I want to do right now, is to be able to speak my truth,” said Judd when asked whether she found [online disinformation purveyors] to be credible sources of information. “I hear everybody else’s truth, and that’s OK. But, in my country that I was raised in, I was able to pay attention to what I wanted to pay attention to, and not be vilified for it.”

But, Judd’s critics in the community say this is far from harmless, in that Judd, as a county supervisor, is tasked with governmental functions, such as certifying results of elections held within the county. In fact, Judd had certified the results of Cochise County’s November 3 [2020] elections, wherein voters in the overwhelmingly Republican county favored Donald Trump for a second presidential term, and elected Judd to another term as the supervisor from the county’s Third District (containing Benson and Willcox, where she lives).

When attempting to share a photograph with the Sentinel that Judd stated showed her purported distance from the U.S. Capitol building at 12:30 p.m. on January 6, Judd inadvertently provided other images from her iPhone. One of those images seemed to demonstrate that the Judds were much closer to the Capitol than Judd had previously admitted. The photo appeared to have been taken on the lawn just outside of the Capitol Building, and the timestamp stated the photograph had been taken at 4:29 p.m. January 6 [2022] … As an offering of proof that the 4:29 p.m. timestamp on the photograph apparently taken on the Capitol grounds was not when the photograph was actually taken, Judd sent a screenshot of her iPhone’s screen shots album.

Present in this screenshot was a document which read, in part: “Don’t believe everything you read. Q said, ‘DISINFORMATION IS NECESSARY.’ We are in the fog of war as things get closer. Just know, Patriots are in control and God is on His throne!”

A popular November 29 2022 Imgur post claimed that a county in Arizona refused to certify its November 2022 midterm election results, but it did not name the jurisdiction. Two officials in Cochise County, Arizona (Tom Crosby and Peggy Judd) refused to certify the election. Judd told local reporters in November 2022 that she found it difficult to trust “any computer,” and wished to do “more research.” On November 28 2022, Arizona secretary of state (and incoming governor) Katie Hobbs filed a lawsuit against the workers to ensure votes in Cochise County were counted.