On July 10 2022, an Imgur account shared a meme with a photo of Republican Sen. Lindsey Graham alongside a quote stating that “any sitting senator” who refused to comply with a subpoena “shouldn’t be a sitting senator anymore”: 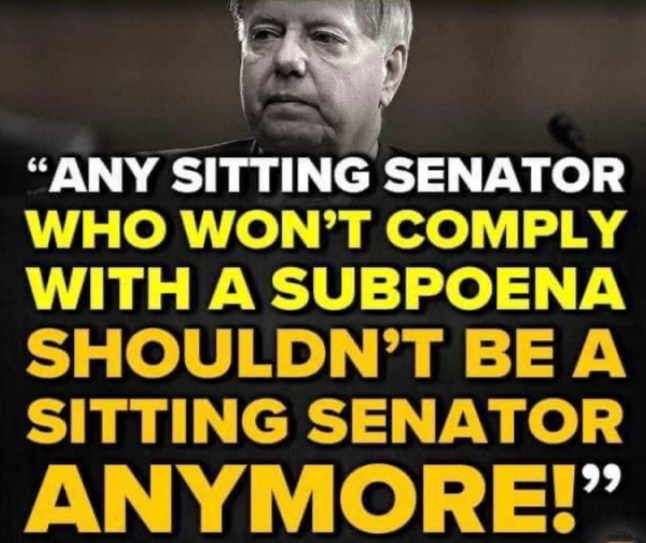 No text or context was submitted alongside the image, which the user titled “.”

For context, a July 6 2022 NPR article reported that Sen. Lindsey Graham planned to “fight” an attempt to compel him to testify in an investigation related to the 2020 election in Georgia:

Attorneys representing Sen. Lindsey Graham of South Carolina said [on July 6 2022] he intends to challenge a subpoena compelling him to testify before a special grand jury in Georgia investigating former President Donald Trump and his allies’ actions after the 2020 election.

Graham was one of a handful of Trump confidants and lawyers named [on July 5 2022] in petitions filed by Fulton County District Attorney Fani Willis as part of her investigation into what she alleges was “a multi-state, coordinated plan by the Trump Campaign to influence the results of the November 2020 election in Georgia and elsewhere.”

Graham attorneys Bart Daniel and Matt Austin said in a statement [on July 6 2022] that the Republican senator “plans to go to court, challenge the subpoena, and expects to prevail,” and they slammed the probe as politically motivated.

As the NPR story explained, attorneys for Graham sought to challenge the subpoena, not ignore it. As the January 6th committee began investigating, CNN did a piece on subpoenas as they related to that investigation, explaining:

A motion to quash a subpoena may be filed if someone believes that it was not issued legally. Such a motion generally means that the subject of the subpoena can refuse to comply with it until the court has made a decision on the motion.

In January [2022], for example, members of the Trump family moved to quash subpoenas from the New York attorney general’s office to two of former President Donald Trump’s children seeking their testimony as part of its civil investigation into whether the Trump Organization manipulated the values of its properties.

A New York judge ruled on February 17 [2022], however, that Trump and his children, Ivanka and Donald Jr., must sit for depositions in the probe.

Because of recent news and the way the meme was constructed, commenters on Imgur largely inferred that the statement was made by Graham himself. They replied:

“Don’t you dare use my words against my party!”

“Few people have so many self-owning quotes from their past than this turd of a human.”

“Anyone paying attention understands that Lindsey Graham has no shame, spine, morals, or ethics.”

At least one commenter asked about whether the words were Graham’s words:

“Is that quotation one of his own?”

A search for “any sitting senator who won’t comply with a subpoena …” returned only fifteen results, one of which featured the original meme in a July 9 2022 tweet. The meme appeared to be the work of Occupy Democrats; the quote was attributed to an individual named Tristan Snell, not Graham:

Another of the few results was Snell’s July 7 2022 tweet:

A misleadingly cropped Imgur meme suggested that Sen. Lindsey Graham (R) said that “any sitting senator who won’t comply with a subpoena shouldn’t be a sitting senator anymore,” framing that appeared to use Graham’s own words against him as he fought a subpoena related to investigations into the 2020 U.S. general election. The original meme attributed the quote to attorney Tristan Snell, who tweeted the commentary on July 7 2022 — almost certainly as a commentary about Graham.