Image depicts a customs declaration filed after the 1969 Apollo 11 shuttle returned to Earth.

On April 29 2021 (a day after the passing of Apollo 11 Astronaut Michael Collins was reported), historian Michael Beschloss tweeted an interesting image — specifically, a purported United States Customs declaration form filed after the crew of that shuttle returned to Earth in 1969:

A table labeled “Flight Routing” followed those fields. In the “Place” column, three locations were listed: “Cape Kennedy,” “Moon,” and “July 24, 1969/Honolulu. Armstrong, Aldrin, and Collins were listed in the “Total Number of Crew” field, and a third column (“Number of Passengers on This Stage”) was marked “Nil” four times.

A fourth and final column for “Cargo” included “Moon Rock and Moon Dust Samples,” with a portion reading “Cargo Manifests Attached.” In addition to Collins’ recent death generating interest in the document, the general unexpectedness of “clearing Customs” after a trip back from the moon was an evergreen element of curiosity.

A longer iteration of the form was shared to Facebook in July 2017: 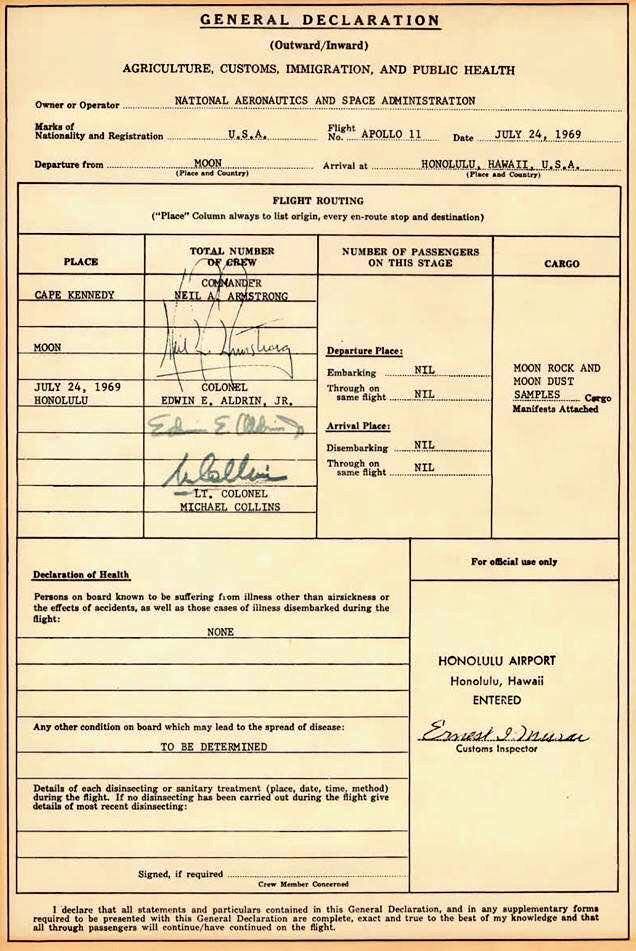 In May 2014, the Facebook page “American Mensa” also shared a version of the document, writing:

The customs form Apollo astronauts had to file when they landed back on Earth.

In 2019, Space.com republished an article (“Back from the Moon, Apollo Astronauts Had to Go Through Customs”) and explained when and how the document became a widespread object of interest:

Before the ticker tape parades and the inevitable world tour, the triumphant Apollo 11 astronauts were greeted with a more mundane aspect of life on Earth when they splashed down 50 years ago today (July 24) — going through customs.

Just what did Apollo 11 astronauts Neil Armstrong, Buzz Aldrin and Michael Collins have to declare? Moon rocks, moon dust and other lunar samples, according to the customs form filed at the Honolulu Airport in Hawaii on July 24, 1969 — the day the Apollo 11 crew splashed down in the Pacific Ocean to end their historic moon landing mission.

The customs form is signed by all three Apollo 11 astronauts. They declared their cargo and listed their flight route as starting Cape Kennedy (now Cape Canaveral) in Florida with a stopover on the moon.

The form was posted to the U.S. Customs and Border Protection website in 2009 to mark the Apollo 11 mission’s 40th anniversary. A copy was obtained by Space.com at the time and verified by NASA.

Six years after the Apollo 11 form was uploaded and verified by NASA, SmithsonianMag.com’s “Astronauts Fill Out Customs Forms, Too” added a bit more information to the document’s backstory:

Even astronauts have to submit expense reports and customs forms — or at least, that was the case in 1969. Apollo 11 crew member Buzz Aldrin recently revealed that NASA reimbursed him for $33.31 for his “business trip” from Houston, Texas, to the moon, reports Nick Allen for The Telegraph.

Aldrin was just following orders: NASA required employees to fill out a “travel voucher memorandum” whenever they returned from a trip. As with most expense reports, theirs was long and complicated. On Aldrin’s July 1969 form, he listed his itinerary: Houston to Cape Kennedy, Florida, to the Moon, then back to the Pacific Ocean to Hawaii and home to Houston.

He tallied $33.31 in private ground transportation to get to and from Cape Kennedy, notes Jethro Mullen for CNN. Though the amount might seem relatively small by modern standards, Mullen points out that according to the Bureau of Labor and Statistics, Aldrin’s tab translates to about $270 today.

In July and August 2015, Aldrin tweeted both his travel voucher and the Apollo 11 customs form:

#TBT My mission director @Buzzs_xtina's favorite piece of my memorabilia. My travel voucher to the moon. #Apollo11 pic.twitter.com/c89UyOfvgY

In honor of Collins’ death in April 2021, Beschloss tweeted a neat piece of Apollo 11 history — a customs form filed by NASA and all three Apollo 11 astronauts upon their return to Earth in 1969. The document was shared by U.S. Customs and Border Protection in 2009 to mark the 40th anniversary of the flight. It has since emerged intermittently on social media, and is indeed real. NASA verified the document to Space.com in 2009, and Aldrin tweeted a copy of it in 2015.