Detainees in unventilated Immigration and Customs Enforcement facilities are being exposed to toxic chemicals not intended for inhalation.

By June 4 2020, protests over the death of George Floyd had spread to every part of the United States and all around the world; because of the social upheaval, a claim that Immigration and Customs Enforcement was “gassing immigrants” in its facilities was possibly not as visible as it might be under normal circumstances:

The above tweet did attract over 150,000 engagements in just 24 hours, and in it, @tahirazubeida said:

That tweet was actually a retweet of a separate, popular June 1 2020 tweet, itself featuring an excerpt from a Yahoo! News article:

In the first, retweeted tweet, @lakeeater indicated that ICE’s detention camps were exposing detainees to a chemical agent known as “HDQ Neutral” with extreme frequency — purportedly four times an hour, or every fifteen minutes:

ICE detention camps are now inches away from establishing full-blown gas chambers. HDQ Neutral is less lethal than Zyklon B but they’re spraying it EVERY 15 MINUTES.

An appended screenshot showed a portion of a May 29 2020 Yahoo! News article by Hunter Walker, “Immigrant detainees say ICE is using coronavirus disinfectant sprays that cause bleeding, burns and pain.” The excerpt had to do with conditions at Adelanto ICE Detention Center in Adelanto, California:

According to the complaint about Adelanto, which is one of the country’s largest ICE detention centers, staff there are spraying HDQ Neutral “every 15-30 minutes” on surfaces throughout the housing unit, which lacks ventilation. The complaint said “at least nine” detainees have experienced severe symptoms from the spray since May 11, including blisters, rashes, bleeding, fainting, breathing difficulties, headaches, stomach pain and nausea. Multiple detainees complained of receiving inadequate care for these symptoms.

“Many of us are very allergic to the substance that they have been spraying. It causes rashes and there is one man with blisters … They spray it on the phones, chairs, tables, every 15-20 minutes – all day & all night long,” said one of the detainees quoted in the complaint.

“There is no fresh air to breathe in the room. The guards have masks & gloves so don’t seem bothered by it but many of us have very red eyes, sore throats, and headaches.”

Walker’s reporting included additional information about conditions at the Adelanto detention center and other camps, and noted that Adelanto is operated by a private (and notorious) company, GEO Group. Information about the use of HDQ Neutral on immigrant detainees was first provided by groups advocating for detainees, many of whom were taken into custody simply for requesting asylum at the border:

Advocacy organizations have filed complaints against Immigration and Customs Enforcement detention facilities in Florida and California, claiming that migrants being held there are suffering severe side effects from disinfectant sprays being used to combat the coronavirus.

In a May 21 2020 letter [PDF] to ICE and the GEO Group (“Toxic Exposure of People in ICE Detention at Adelanto to Hazardous Chemicals”) from Freedom for Immigrants and the Inland Coalition for Immigrant Justice, its authors explained that as of “May 11, 2020, [the groups] received reports multiple times per day from people in ICE detention at Adelanto regarding the negative and serious health consequences that they are suffering due to being exposed to hazardous chemicals being disseminated by the GEO Group staff.”

Numerous first-person accounts about the use of HDQ Neutral were included, as well as detail about the frequency of the chemical spraying. One detainee identified the chemical as “HDQ” and said it was sprayed several times each hour, adding that the guards spraying the chemicals were equipped with masks and gloves:

“Many of us are very allergic to the substance that they have been spraying. It causes rashes and there is one man with blisters. The bottles say “HDQ.” They spray it on the phones, chairs, tables, every 15-20 minutes – all day & all night long. They are keeping track on some sort of document to make sure they are continuously spraying. There is no fresh air to breathe in the room. The guards have masks & gloves so don’t seem bothered by it but many of us have very red eyes, sore throats, and headaches.”

Another detainee reported that the chemicals were contaminating food, and described widespread adverse reactions to the chemical irritants:

“The toxic spray they are using every 30min is causing really bad allergies. Symptoms are red irritated eyes, coughing up blood, sneezing and nausea. The spray is also contaminating the food.”

Based on multiple reports, the two advocacy groups said:

From these multiple reports, we can confirm the following[:] The GEO Group guards are rampantly spraying chemicals, such as Spartan Chemical Company’s HDQ Neutral, every 15-30 minutes around the housing units. The sprayed chemicals are coming into contact with individuals’ eyes, noses, mouths, skin, clothing, bedding, food and drinking water, on an ongoing basis.

The groups also noted that the chemicals were being used in a manner inconsistent with their labeling, and in a harm-causing fashion without regard for the safety of detainees:

On April 10, 2020, ICE issued a statement asserting that it would follow guidance issued by the Environmental Protection Agency (EPA) regarding the usage of disinfectant products to prevent the spread of COVID-19 in detention facilities. However, it is apparent that ICE has not been following EPA guidance, which clearly state the following:

● “These products are for use on surfaces, NOT humans.”
● “Use products that could reduce your inhalation exposure, such as wipes or dampened towels, to disinfect surfaces. These options will substantially lower inhalation exposure compared to sprays, which generate aerosols.”
● “EPA does not recommend use of fumigation or wide-area spraying to control COVID-19… Fumigation and wide-area spraying are not appropriate.”

As the groups indicated, ICE issued documentation on April 10 2020 regarding protocols to prevent the spread of COVID-19 in camps. That documentation is available as a PDF on ICE.gov.

HDQ Neutral is a brand name chemical manufactured by Spartan Chemical Company, Inc. A Material Safety Data Sheet [MSDS, PDF] from Spartan on page one indicates it is a category one irritant topically, and category four irritant orally and as a mist.

That sheet notes HDQ Neutral is “harmful if swallowed,” “harmful if inhaled,” and “cause severe skin burns and serious eye damage” if used in a manner inconsistent with labeling directives to implement it as a disinfectant for surfaces (not people): 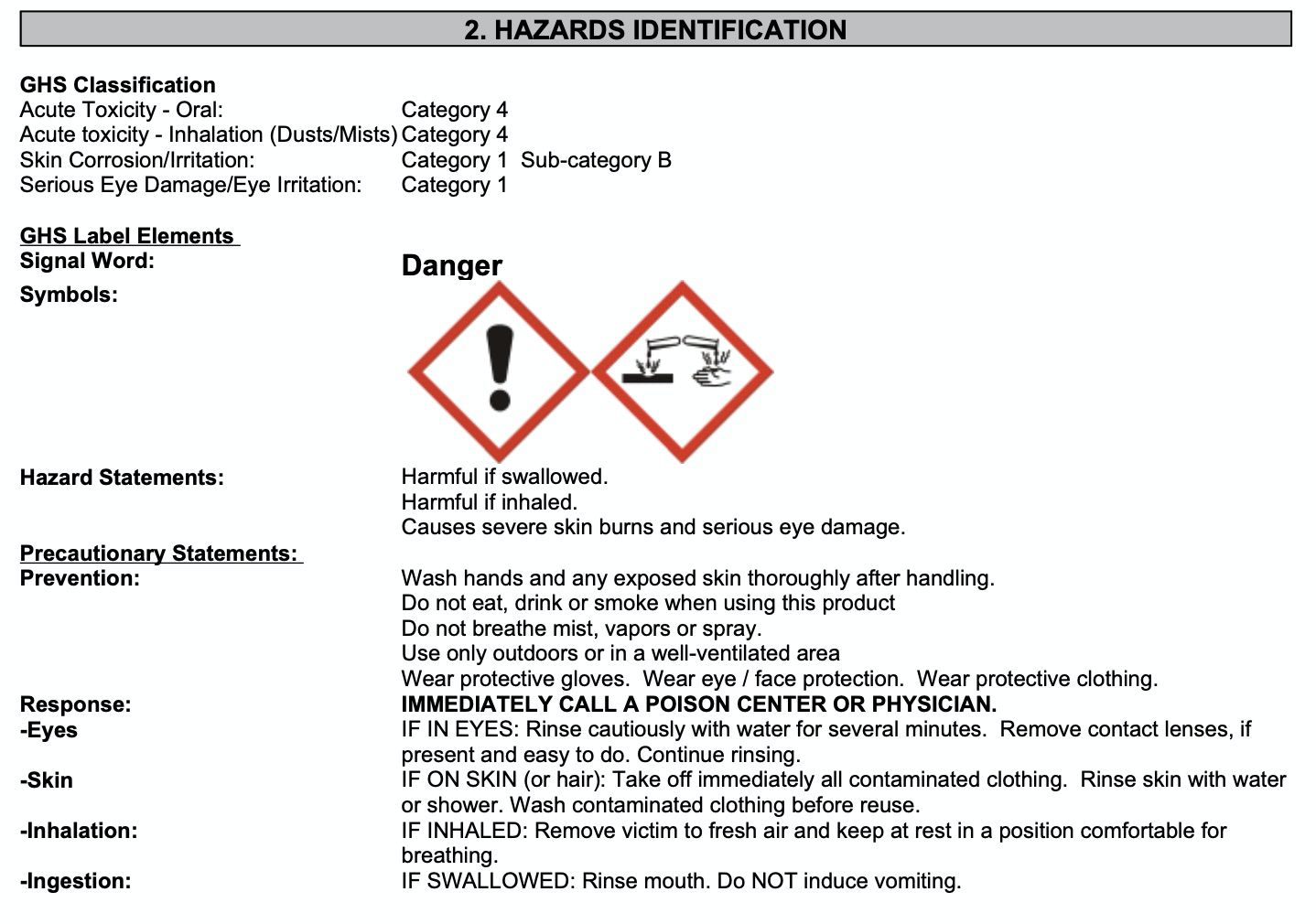 As the groups further noted, the EPA advised against “wide-area spraying” with disinfectants to combat the spread of COVID-19:

Unless the pesticide product label specifically includes disinfection directions for fogging, fumigation, or wide-area or electrostatic spraying, EPA does not recommend using these methods to apply disinfectants. EPA has not evaluated the product’s safety and efficacy for methods not addressed on the label. A disinfectant product’s safety and effectiveness may change based on how you use it. If a pesticide product’s label does not include disinfection directions for use with fogging, fumigation, wide-area, or electrostatic spraying, EPA has not reviewed any data on whether the product is safe and effective when used by those methods.

On May 23 [2020], an organization called Friends of Miami-Dade Detainees filed a complaint with the DHS Office for Civil Rights and Civil Liberties about the use of a product at Glades called Mint Disinfectant. The complaint was written by the group’s lead organizer, Wendy King.

“Staff are spraying a chemical inside the housing units that is causing serious respiratory distress among people with asthma, bronchitis, and other medical conditions. They are reporting that after the spray is used, people with asthma must use their inhalers more frequently, and that some people are suffering from shortness of breath and/or headaches,” King wrote.

Rebekah Entralgo, a media advocacy strategist at Freedom for Immigrants, claimed that the aggressive use of toxic disinfectants at Adelanto and other GEO Group camps was “an apparent act of retaliation for publicly reporting that GEO staff was previously only cleaning with water” earlier in the COVID-19 pandemic.

Walker also included information provided by ICE spokesperson Alexx Pons, who confirmed the use of “disinfectant sprays” at the Adelanto camp and others:

GEO Group spokesperson Christopher Ferreira referred questions about the use of chemical sprays at Adelanto to ICE. Alexx Pons, a spokesperson for ICE, said in a statement that the agency is “committed to maintaining the highest facility standards of cleanliness and sanitation, safe work practices, and control of hazardous substances and equipment to ensure the environmental health and safety of detainees, staff, volunteers and contractors from injury and illness.”

“Disinfectant formulations used at Adelanto are compliant with detention standards, registered by the Environmental Protection Agency (EPA), and used according to manufacturers’ instructions for routine cleaning and maintenance of the facility,” Pons said. “Any assertion or claim to the contrary is false.”

Pons reiterated that the chemicals were in use at Adelanto and other camps in a June 5 2020 Insider.com article about the controversy, and to Newsweek in a statement. (The GEO Group “did not immediately respond to a request from Insider for comment.”)

A number of social media posts claiming ICE was “gassing immigrants” referenced a controversy over purportedly retaliatory use of toxic chemicals in a manner inconsistent with their labeling; in Adelanto, the chemical in question was HDQ Neutral. A spokesperson for ICE, Pons, confirmed that the staff were using the chemical to combat the spread of COVID-19 in camps.