In Wisconsin, children are allowed to consume alcohol legally in the presence of a parent or legal guardian.

On February 12 2019, the Facebook page “Did You Know” shared the following meme, claiming that people of all ages in the state of Wisconsin — including children — can legally consume alcohol: 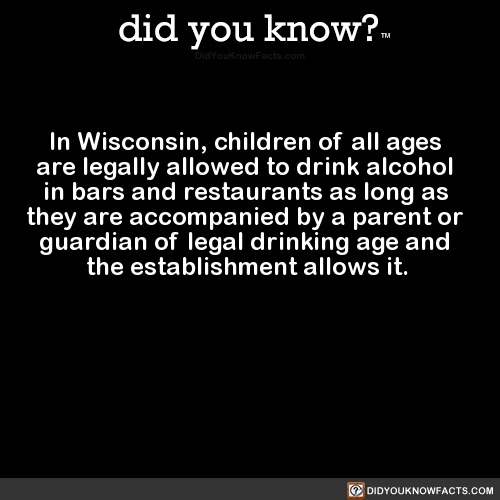 Against a black background, its text stated:

did you know? TM

In Wisconsin, children of all ages are legally allowed to drink alcohol in bars and restaurants as long as they are accompanied by a parent or guardian of legal drinking age and the establishment allows it.

The claim was fairly straightforward, but its presence on a “did you know” or “fun facts” site suggested that few people outside of Wisconsin might be aware of the fact (if it were true.)

Like the claim, its answer was reasonably straightforward. According to the State of Wisconsin Department of Revenue, children and underage individuals are legally allowed to consume alcohol at a bar or restaurant:

Yes. Persons under age 21 may possess and consume alcohol beverages if they are with their parents, guardians or spouses of legal drinking age; but this is at the discretion of the licensee. The licensed premises may choose to prohibit consumption and possession of alcohol beverages by underage persons.

A follow up question on the site was “Are there other times that underage persons can be on licensed premises?” In response, Wisconsin’s DOR said yes, several, linking to a PDF document titled “Wisconsin Alcohol Beverage and Tobacco Laws for Retailers.” One of several additional stipulations held:

Although reference to “all ages” was made in the meme and the law isn’t much clearer, an important stipulation was that it was up to the licensee’s discretion. Presumably, license holders would be unlikely or unwilling to serve alcohol to “children of all ages” even with a permissive parent present, and the discretion mentioned likely involved, at the very least, older teenagers.

As the meme said, underage individuals in the state of Wisconsin are legally permitted to consume alcohol at a bar or restaurant in the presence of a consenting parent or legal guardian; additional stipulations permit Wisconsin residents under 21 to legally imbibe.

According to PolitiFact, Wisconsin is not entirely an outlier. Laws in Texas, Ohio, and Montana make similar allowances for underage drinking.