Image shows a screengrab of a real tweet from a woman whose parents were forced to divorce after 52 years of marriage, to shield the wife from her husband's medical debt.

On May 12 2022, an Imgur account shared a purported screenshot of a tweet by a woman who said that her parents had divorced after 52 years — so that her mother would not inherit her father’s medical debt after his death: 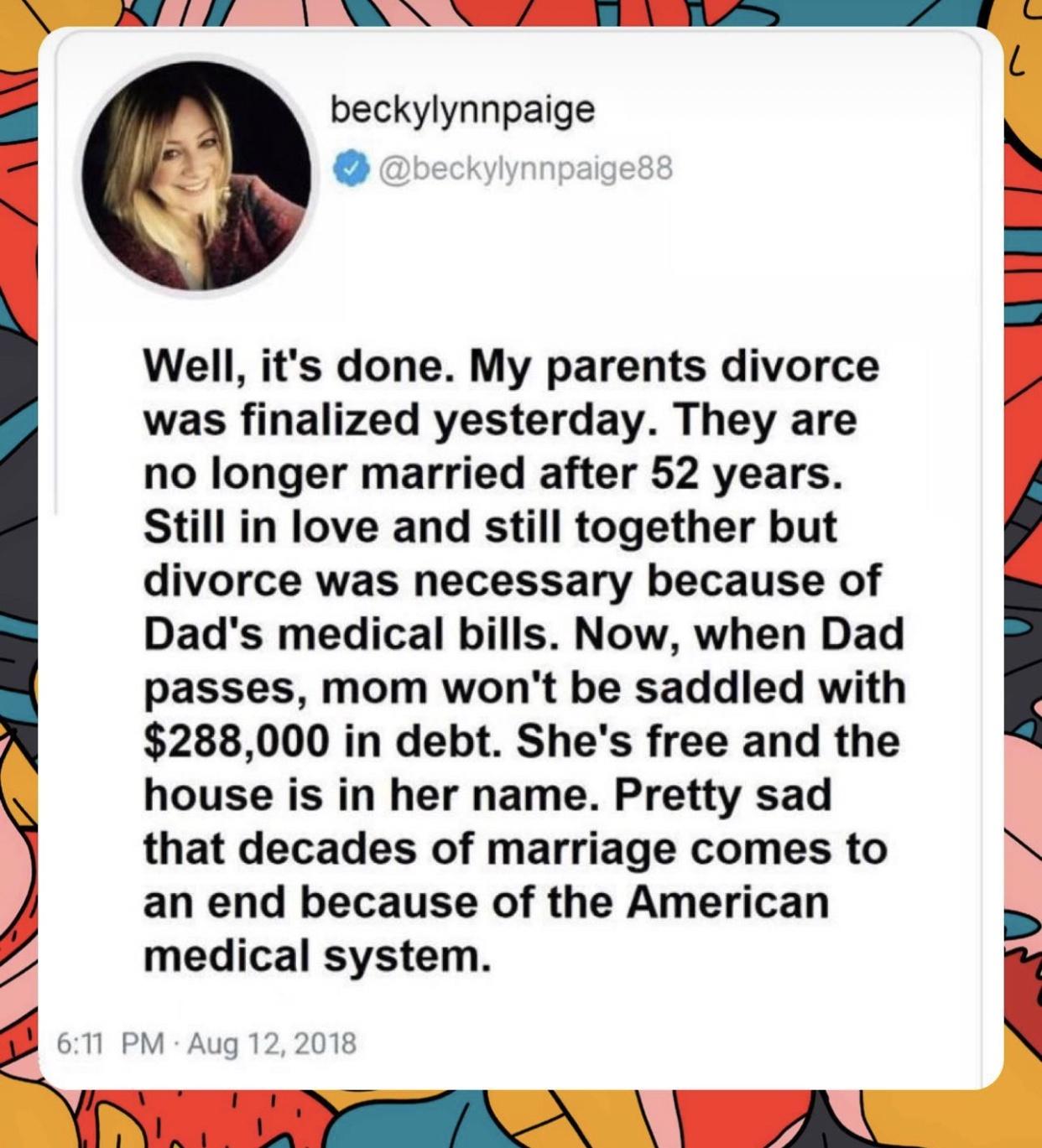 On a patterned background, an atypical screenshot of a tweet appeared. Its date and time stamp (6:11 PM on August 12 2018) didn’t line up with how tweets were rendered, and the text featured in the tweet was in a bold font.

It was attributed to the purportedly verified user “Becky Lynn Paige” (@beckylynnpaige88), and it read:

Well, it’s done. My parents divorce was finalized yesterday. They are no longer married after 52 years. Still in love and still together but divorce was necessary because of Dad’s medical bills. Now, when Dad passes, mom won’t be saddled with $288,000 in debt. She’s free and the house is in her name. Pretty sad that decades of marriage comes to an end because of the American medical system.

The Imgur post appeared on the same day several United States senators introduced the Medicare for All Act of 2022. News about the bill was nearly nonexistent, but an editorial by sponsor Sen. Bernie Sanders (I-Vermont) was published by Fox News on May 12 2022.

The same tweet (minus the background) was shared to Imgur on April 22 2022. While that iteration lacked the background, all elements (such as the font, the verified handle, and the odd time and date) were identical; we were unable to locate any screenshots with realistic elements or different rendering (such as in dark mode).

That was also the case when the image was shared to r/WhitePeopleTwitter and r/awfuleverything in November 2021, and in an August 2021 Imgur variation:

Verified accounts typically belong to people whose online presences might be confused with imposters, such as individuals who are public figures. A May 13 2022 search for the handle @beckylynnpaige88, however, returned only fifteen total mentions of the Twitter handle.

Of those results, the top result was an August 2021 fact check by LeadStories.com. It observed that the tweet contained more characters than Twitter allowed, and explained:

In August 2019, Observer.com published an article about American couples divorcing to protect assets due to medical debt — suggesting that the phenomenon itself is not fake:

“In my financial planning practice, I deal with the emotionally fraught issue of spiraling medical/long-term care costs,” [financial planner Eve] Kaplan wrote for Forbes. “Counseling someone to consider divorce to stave off financial ruin is ‘difficult’—to say the least. For the healthy spouse, this advice can feel profoundly wrong and immoral, despite the best intensions of well-meaning financial advisors and attorneys.”

Kaplan wrote about a painful case of an elderly couple maxing out their savings, with little chance of replenishing them or having available assets to cover the surviving spouse. An elder care attorney recommended the dreadful decision of divorce for the happily married couple.

Sadly, it’s not an isolated case for such a cruel choice. Before the days of Obamacare, Nicholas D. Kristof penned the story of another retired couple having to make another no-win choice, as the husband suffered dementia. The wife was told that her assets could be seized to pay for the care. A hospital and social worker recommended divorce, sacrificing the marriage for financial security. It’s a horrible choice for the healthy spouse… abandon care or go bankrupt.

A May 2022 Imgur post depicted a purported Twitter screenshot of an anecdote from a woman whose parents were forced to divorce after 52 years of marriage, with medical debt leaving them no other choice. There’s no evidence the tweet or Twitter user ever existed, and it wasn’t clear where the screenshot originated. Although the tweet was fake, anecdotes about divorces spurred on by medical debt circulated intermittently over the years.