If you were using social media on December 31 2019, chances are a Best Buy “Y2K warning” sticker crossed one of your feeds — it looked something like this: 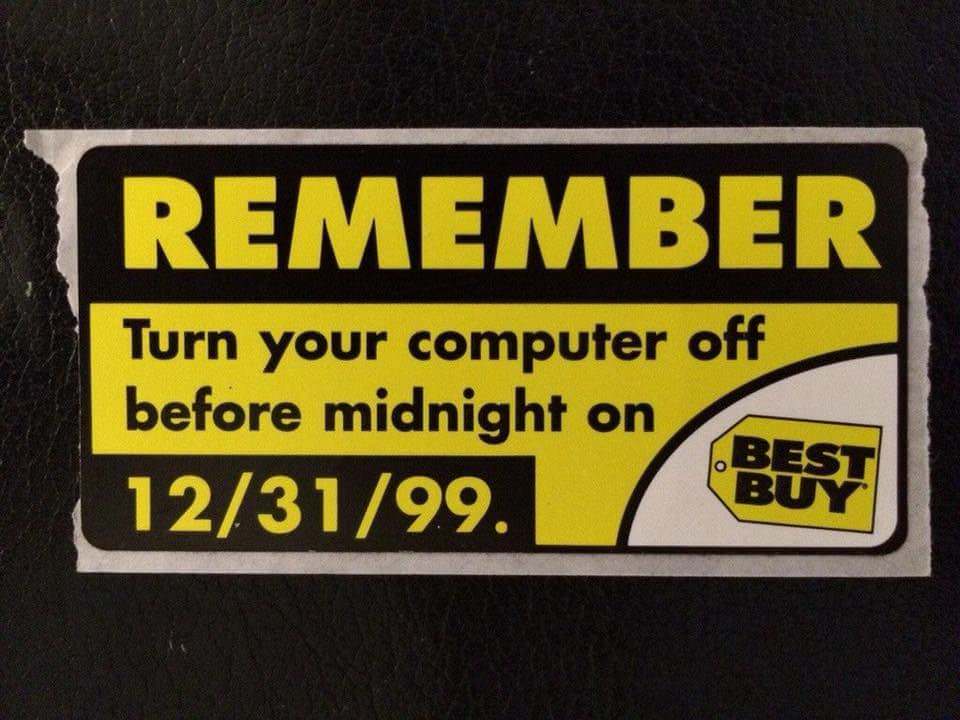 Although some versions were digital renderings, others like the one above showed what looked like a sticker torn from a strip. Above a small “Best Buy” logo, text did not mention Y2K by name. It read:

REMEMBER
Turn your computer off before midnight on 12/31/99

As 2019 drew to an end and 2020 came closer, the internet marked the passage of two decades since the Y2K panic — when ticking over to the 2000s was supposed to cause widespread computer failures and malfunctions. For those who didn’t remember the flap firsthand, some news organizations published retrospectives noting how silly the fears looked in hindsight:

The term Y2K had become shorthand for a problem stemming from the clash of the upcoming Year 2000 and the two-digit year format utilized by early coders to minimize use of computer memory, then an expensive commodity. If computers interpreted the “00” in 2000 as 1900, this could mean headaches ranging from wildly erroneous mortgage calculations to, some speculated, large-scale blackouts and infrastructure damage.

It was an issue that everyone was talking about 20 years ago, but few truly understood. “The vast majority of people have absolutely no clue how computers work. So when someone comes along and says look we have a problem…[involving] a two-digit year rather than a four-digit year, their eyes start to glaze over,” says Peter de Jeger, host of the podcast “Y2K: An Autobiography.”

That coverage also noted scattered Y2K effects observed worldwide, though none as dire as predictions of possible nuclear accidents or planes plunging from the sky:

Isolated incidents that illustrate the potential for adverse consequences — albeit of varying degrees of severity — ranging from a comically absurd century’s worth of late fees at a video rental store to a malfunction at a nuclear plant in Tennessee.”

Among the more serious effects were 150 pregnant women in the United Kingdom who received inaccurate diagnostic information attributed to Y2K programming bugs. Of those affected, two reportedly terminated their pregnancies based on incorrect testing results attributed to Y2K problems.

As previously explained, the transition from the year 1999 to 2000 carried along with it fears computer codes associated with two-digit dates in 1999 would crash as the clock ticked over to the year 2000. The general public did not know precisely what to expect, if anything, which plausibly could have resulted in stickers such as the Best Buy Y2K warning being mass-produced.

That Best Buy Y2K sticker wasn’t new to the internet in December 2019 either. In June 2017, a Reddit user shared what looked like the same image to r/geek:

Y2K Warning sticker from Best Buy circa 1999 from geek

In response to user questions about how powering computers off might “solve” anticipated Y2K programming bugs, others commented to explain the putative logic behind such a directive:

e.g. A program requests the date from the OS/BIOS at startup and after that maintains it itself. It only stores about the last 2 digits of the year, but has no special code to handle the 99->00 tickover. When it reaches the end of (19)99 it’ll increment the year to ‘100’ and overflow a 2-character buffer used to for display. When run the next day, it correctly picks up ’00’ from the date and works fine until the next century tickover.

The same picture cropped up again in December 2017 on Imgur, where users shared nostalgic comments about software of the era:

But I loved “trial”software from this era. You could change your date to 2050, install it, and change the date back, then it never expired!

The same photo was also shared to Twitter in January 2015. A similar sticker was shared to r/mildlyinteresting in July 2015, purportedly spotted on a microwave in an unnamed hospital:

I found this ‘Y2K safe’ sticker on a microwave at a hospital…..this week from mildlyinteresting

Although the image of the Best Buy Y2K warning circulated from at least 2017 onward, it was rarely accompanied by any sort of indication the sticker was a real artifact of the Y2K scare. On December 30 2019, a post to the Best Buy blog revisited those concerns from the point of view of retail workers and technicians:

The problem — made prevalent in headlines in the months leading up to the new year — was that computers only processed dates in two digits, which meant that the coming year 2000 would be indistinguishable from 1900. Some feared that glitch would cause computer systems to melt down at midnight.

In the end, it wasn’t the technological apocalypse some had predicted. But it was still an important moment in history for Geek Squad and Best Buy, which would join forces two years later.

For the 20th anniversary of Y2K, we chatted with Agent Bork and a few other longtime Agents to reflect on the computer crisis that never really happened.

A former Best Buy employee described Y2K preparations as an “exercise in planning for the best but expecting the worst.” That post went on to explain:

For several months leading up to the new year, every computer that came into a Best Buy store received a sticker reminding the customer to turn it off before midnight (pictured above).

Nearly all iterations of the Best Buy Y2K warning sticker appeared to involve the same photograph of one torn from a strip, but no backstory for where or when that exact picture was taken appeared to be available. Nevertheless, Best Buy confirmed that Y2K warning stickers were distributed with “every computer” that came into one of their stores in late 1999. As shown, the sticker warned everyone to power their computers down “before midnight on 12/31/1999.”