In May 2021 Blue's Clues shared a Pride segment to YouTube, depicting a beaver with top scars (indicating a gender affirming mastectomy).

On May 29 2021, Twitter user @WaferBiscuits tweeted about a beaver on Blue’s Clues who was purportedly bearing scars on their chest, and commended animators for taking the time to include the subtle detail indicative of gender-affirming surgeries:

blues clues taking the time to give this beaver top scars makes me feel a lot of feelings ngl pic.twitter.com/tjYf70w5L0

Alongside what appeared to be a screenshot from a Blue’s Clues video, the account wrote:

[image of beaver family, the younger beaver is wearing a trans pride bracelet and has top surgery scars across their chest]

It’s the Blue’s Clue’s [sic] And You Pride Parade and we need you to sing-along as the ‘Families Go Marching’ proudly!

When we lead we love, we all win ❤️ Happy #PrideMonth! pic.twitter.com/HGG4WBkSj5

West also tweeted a link to the video on Twitter on May 28 2021, tagging Nickolodeon and Nick Jr. @Nickelodeon responded to the tweet:

This is so amazing 😊

The sing-along features an animated version of drag queen Nina West, a beloved “RuPaul’s Drag Race” contestant from season 11, singing to the melody of “The Ants Go Marching.” However here, the lyrics have been changed to be very LGBTQ inclusive.

In the parade we see all types of families comprised of different animals that have two daddies, two mommies or other types of parents from the LGBTQ community. “This family has two mommies. They love each other so proudly and they all go marching in… the… big parade,” sing the lyrics. Other terms featured include “trans,” “non-binary” and “queer.”

Screenshots circulating on Twitter visually showed elements described in the excerpt above:

This children's cartoon segment has more queer representation than anything else out there and it is melting my cold gay heart 🥲🏳️‍🌈💜 pic.twitter.com/ppWns4UZEQ

In the YouTube clip, the Blue’s Clues “top scars” beaver appeared at the 1:05 mark: 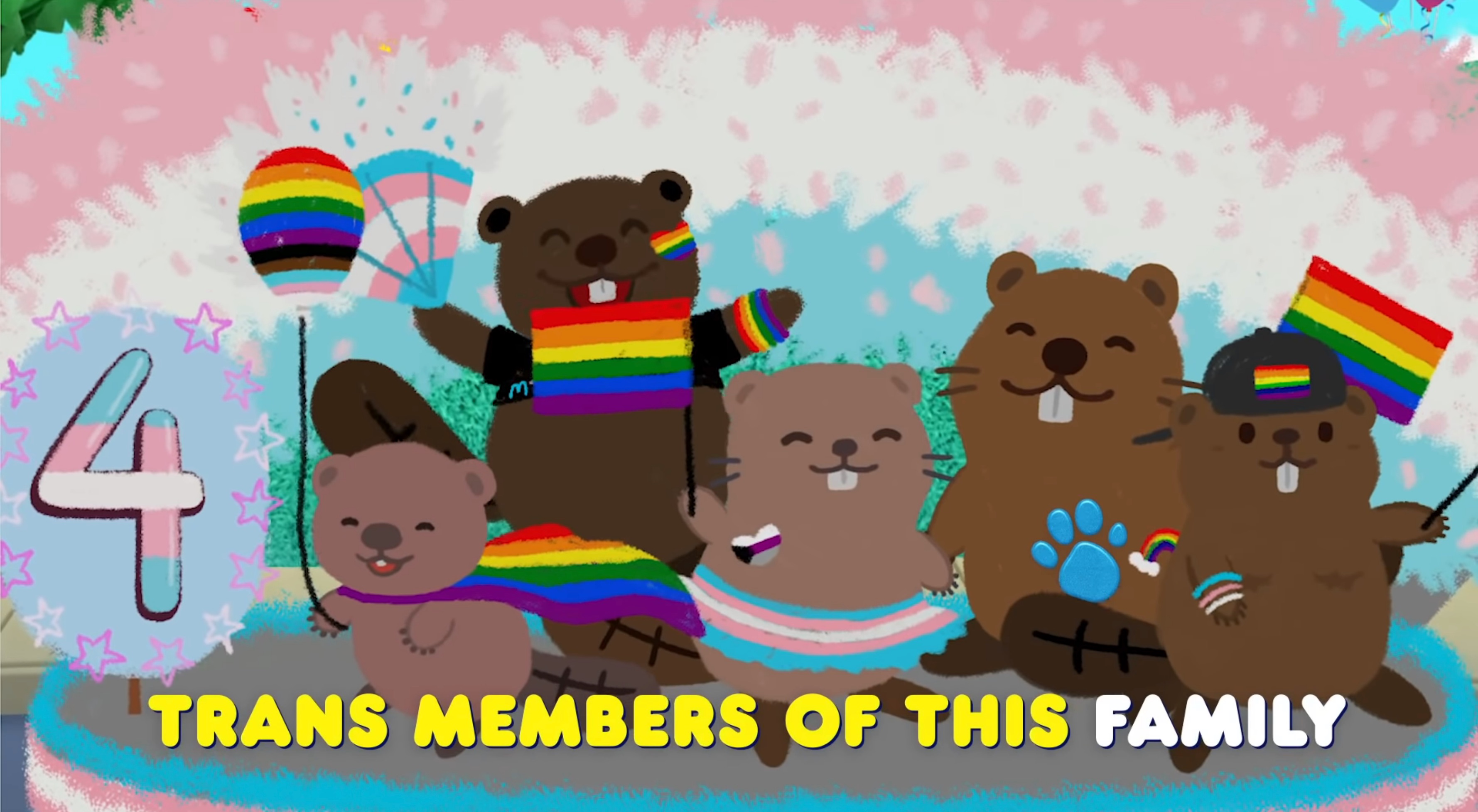 A number “4” was rendered in the colors of the transgender pride flag, and the five beavers remained on screen for the following lyrics:

Four of the five beavers had no visible marks like the fifth beaver; one wore a shirt. The fifth beaver was the furthest to the right (wearing a rainbow flag hat and transgender pride bracelets), and the markings resembled scars.

The video posted to the Blue’s Clues & You was the subject of several articles, some reporting that the clip had stirred controversy (as was the case with a separate “Pride” acknowledgment by Nick Jr’s Blue’s Clues in February 2021). That February 2021 article indicated that the earlier video was “exclusive to the show’s official YouTube channel,” and had yet to air on television.

A video acknowledged by @Nickelodeon and shared to the official YouTube channel for Blue’s Clues depicted what appeared to be an animated beaver with “top scars” as part of “The Blue’s Clues Pride Parade 🏳️‍🌈 Sing-Along [featuring] Nina West.” Child-oriented cable television channel Nick Jr. formally acknowledged Pride Month with posts to Instagram and Twitter on June 1 2021, but @nickjr’s accounts didn’t directly interact with the clip as far as we could see. Multiple news organizations published reports about the video, and the beaver’s “top scars” were not edited or altered as the clip went viral. Nick Jr. did not formally acknowledge the video, which did not identify the beaver family as having “trans members,” nor did the network confirm the markings were necessarily “top scars.” Due to the distance between the network and the existing video, we rated the claim Mixed — the Blue’s Clues Pride song appeared to be authentic, but the nature of the beaver’s “top scars” markings were unconfirmed and not acknowledged by Nick Jr.