A billboard depicted in a viral image reads "boss texts on your day off? Leave them unread."

On November 3 2021, performance artist and political activist Vermin Supreme shared a photograph of a purported “Leave Them Unread” billboard: 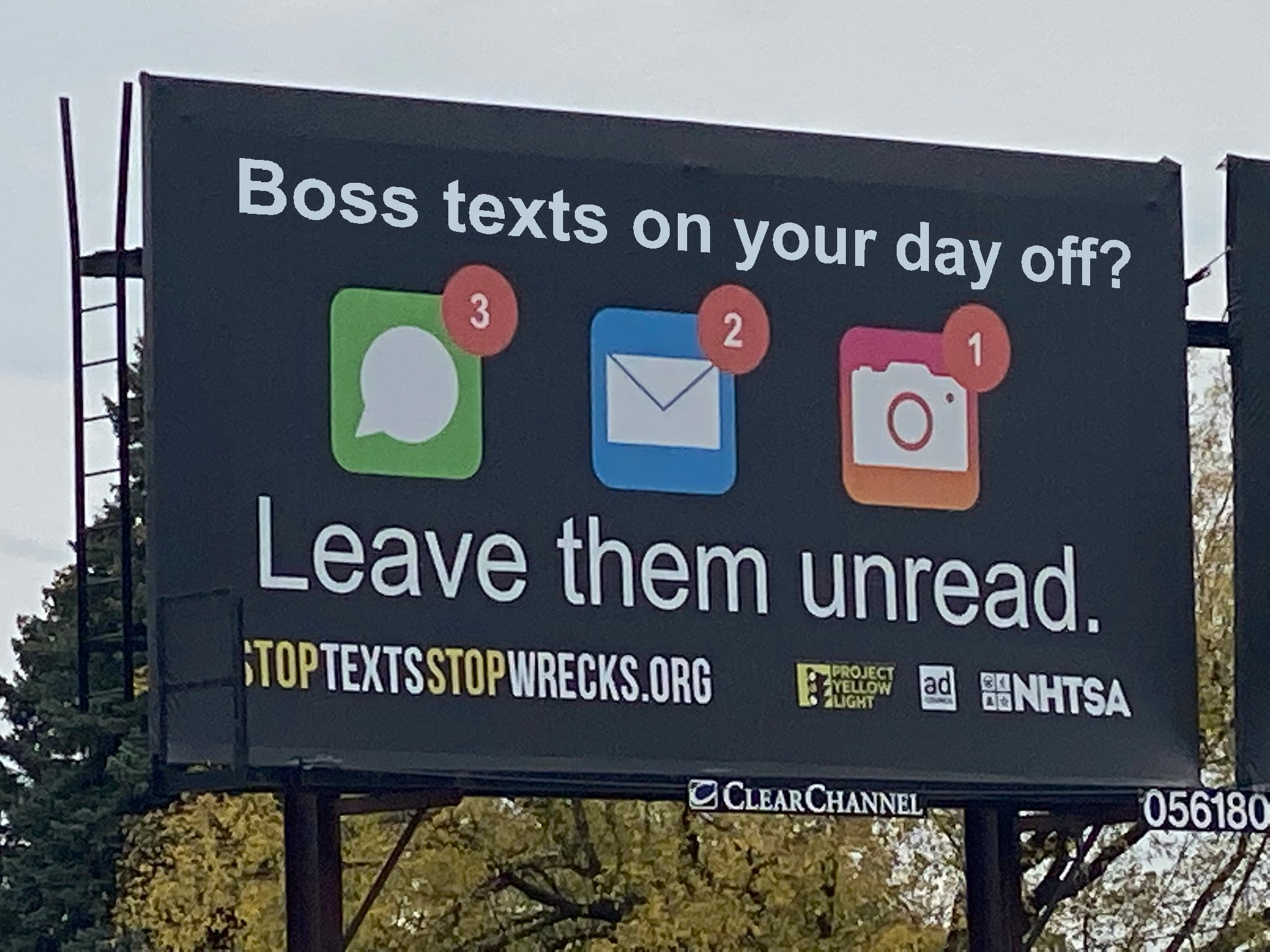 ‘Boss Texts on Your Day Off? Leave Them Unread’ Meme Origin

Three mobile app icons (iMessage, Mail, and a camera) were in the middle of the billboard, and wrapping text read:

Boss texts on your day off?

Ignore your boss and the life you save may be your own.

Although the rendering of “Boss texts on your day off” aligned with the billboard’s fonts and colors, it appeared to have been added to the image after it was taken. A reverse image search indicated that the same edit was popular on Twitter one day prior:

Time answering texts from your boss should be paid pic.twitter.com/RnU51EUb8W

Before that, the image was the subject of a thread on the r/antiwork subreddit, described in its sidebar as follows:

A subreddit for those who want to end work, are curious about ending work, want to get the most out of a work-free life, want more information on anti-work ideas and want personal help with their own jobs/work-related struggles.

A November 1 2021 post entitled “Words of wisdom” featured the image:

Words of wisdom from antiwork

‘The Great Resignation’ and Context for the Meme

One commenter in the thread described the meme’s sentiment as part of “the zeitgeist,” almost certainly a reference to a cultural shift around work culture and the workplace in general. The change was pronounced enough that Wikipedia features a “Great Resignation” entry, the first few paragraphs of which state:

The Great Resignation, also known as the Big Quit, is the ongoing trend of employees voluntarily leaving their jobs, from spring 2021 to the present, largely in the United States. The resignations have been characterized as in response to the COVID-19 pandemic, the American government refusing to provide necessary worker protection, and wage stagnation despite rising costs of living. Some economists described the Great Resignation as a general strike while discussing Striketober, a strike wave in October 2021.

The term Great Resignation was likely coined by Anthony Klotz, a professor of management at Mays Business School of Texas A&M University, who predicted this mass exodus was coming in May 2021.

Subsequent details indicated that between December 2000 to the time the COVID-19 pandemic officially took hold in early 2020, “the United States resignation rate never surpassed 2.4% of the total workforce per month.” The entry added that as time wore on, “workers … paradoxically quit their jobs in large numbers[,] despite continued labor shortages and high unemployment.”

According to the U.S. Bureau of Labor Statistics, 4 million Americans quit their jobs in July 2021. Resignations peaked in April [2021] and have remained abnormally high for the last several months, with a record-breaking 10.9 million open jobs at the end of July [2021]. How can employers retain people in the face of this tidal wave of resignations?

(The obvious answer, “pay workers more and treat them better,” seems to still elude most employers.)

On October 19 2021, business outlet CNBC published “The Great Resignation: Why millions of workers are quitting” (with follow-up pieces on November 1 and 2 2021). The initial article began with a “quits rate,” adding detail about factors driving Americans away from their jobs:

Americans are leaving their jobs in droves.

In August [2021] 4.3 million Americans quit their jobs. While some people have left the workforce entirely, job security and better pay are top concerns for others.

The quits rate, which is measured against total employment, rose to a series high of 2.9% in August [2021], according to the Labor Department’s Job Openings and Labor Turnover Survey … “The Great Resignation,” the exodus of workers has created hiring challenges for companies and left millions of jobs unfilled … Working women have faced an additional burden, juggling child care duties, virtual schooling and their careers.

About a week before the “Boss texts on your day off” meme began spreading, the original was itself the subject of a viral tweet.

That version, which did not include the “Boss” phrasing, was popular in part due to confusion over why the “camera” app displayed a notification:

why the fuck does the camera have a notification pic.twitter.com/zsYoukVN2I

As for that graphic, it appeared to be original and unaltered. A website address at the bottom, stoptextsstopwrecks.org, led to a June 22 2021 iteration of the image and information about its origin:

Our high school billboard Project Yellow Light winner Mia Allen reminds us that all notifications should be left unread while you’re driving.

A November 2021 meme featured a billboard reading “Boss texts on your day off? Leave them unread.” The earliest variation we located of that version was a November 1 2021 Reddit r/antiwork post. Originally the image spread virally due to the “camera” app seemingly featuring a notification, before the “Boss” element was apparently edited in by  someone along the line. As for the basis of the meme, national discourse about an ongoing exodus from the labor force, which has been dubbed the “Great Resignation” or the “Big Quit,” generated a number of similar memes alluding to a waning interest in participating in an often abusive work culture following the events of 2020 and 2021.