"In 2013, Britney Spears' music was used by British Naval Officers to ward off Somali Pirates on the east coast of Africa."

On February 9 2022, a “fun fact” meme explaining that the music of pop star Britney Spears was used to repel Somali pirates in 2013 appeared on Imgur: 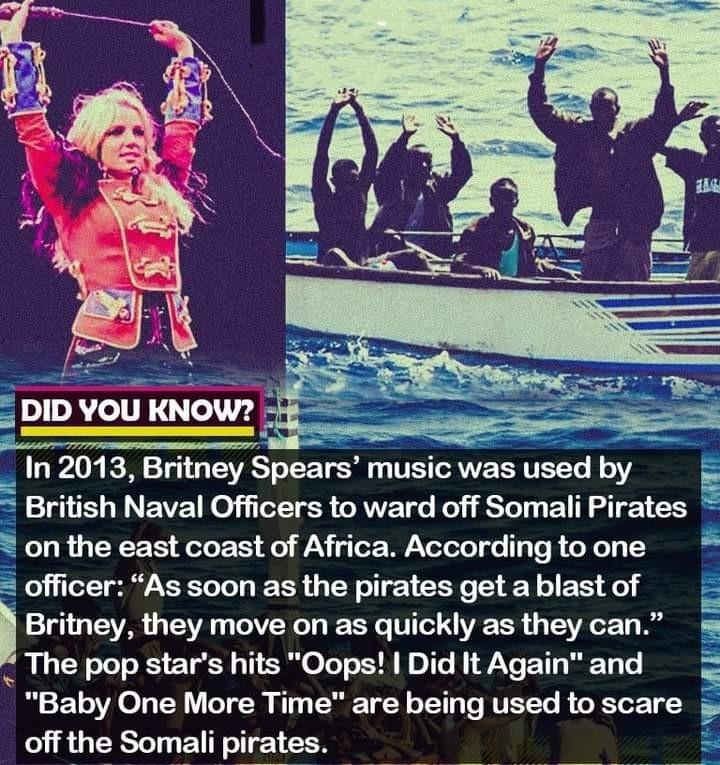 Spears was shown at the top left of the meme, and a group of men in a small boat, arms raised in an apparent gesture of surrender, appeared on the top right. Text below the meme read:

In 2013, Britney Spears’ music was used by British Naval Officers to ward off Somali Pirates on the east coast of Africa. According to one officer: “As soon as the pirates get a blast of Britney, they move on as quickly as they can.” The pop star’s hits “Oops! I Did It Again” and “Baby One More Time” are being used to scare off the Somali pirates.

No sources appeared alongside the meme. One commenter responded:

Imgur credulously upvoting unsubstantiated factual claims will never get old. You got a source for this @OP? #journalistic_integrity

We found a November 2021 variation on the meme shared to Facebook by the page “The Sea Shack.” That iteration’s watermark was not cropped out, but we were unable to locate an original version linked to the watermarked image.

Contextually, the meme referenced a broader issue of modern-day piracy. A January 2012 entry on the United Nations’ African Renewal sub-site provided background for pirates in Somalia:

[In 1991], when the government of Somalia collapsed, few imagined that the country’s ongoing state of lawlessness would eventually spawn piracy on such a scale that the security of the western Indian Ocean region could be threatened. At first, many assumed that pirate attacks on passing ships could be quickly stifled. But the problem has grown into a global malady that so far has warranted seven United Nations resolutions, one of which authorized “all necessary means to repress piracy and armed robbery at sea.”

According to the UN’s International Maritime Organization (IMO), the problem is a global one, with 276 acts of piracy or armed robbery against ships reported worldwide in 2010. With failed attempts added, the total climbed to 489, a 20 per cent increase from 2009. Although the South China Sea suffered the most attacks, piracy off East Africa, much of it carried out from Somalia, came in second.

Looking only at attacks in international waters, East Africa was well in the lead in 2010, reports the IMO. The only lives lost that year were during East African attacks, while the number of crew members taken hostage there, usually for ransom, reached 629, far higher than anywhere else. According to the International Maritime Bureau, a piracy reporting centre based in Malaysia, some 54 crew members and passengers have been killed worldwide since 2006.

The meme referenced 2013 as the year during which “British Naval Officers” purportedly leveraged Britney Spears’ hits to frighten and repel Somali pirates. hat year, a number of news organizations carried or referenced the story, with the first returned result from The Guardian in October 2013:

In an excellent case of “here’s a sentence you won’t read every day”, Britney Spears has emerged as an unlikely figurehead in the fight against Somali pirates.

According to reports, Britney’s hits, including Oops! I Did It Again and Baby One More Time, are being employed by British naval officers in an attempt to scare off pirates along the east coast of Africa. Perhaps nothing else – not guns, not harpoons – is quite as intimidating as the sound of Ms Spears singing “Ooh baby baby!”

In that excerpt, two pieces of context appeared. One was the use of “according to reports,” and the other was a purported original source — British tabloid Metro.co.uk.

The Guardian linked to the Metro.co.uk article, which was published on October 27 2013. It sourced the information from statements by a merchant navy officers, and it read in part:

Spears’s chart-toppers Oops! I Did It Again and Baby One More Time have proved to be the most effective at keeping the bandits at bay.

Second Officer Owens, who works on supertankers off the east coast of Africa, said: ‘Her songs were chosen by the security team because they thought the pirates would hate them most.

‘It’s so effective the ship’s security rarely needs to resort to firing guns,’ said the 34-year-old, from Gartmore, near Aberfoyle, Stirling.

‘As soon as the pirates get a blast of Britney, they move on as quickly as they can.’

Most subsequent versions of that story relied on that single-source claim from a tabloid. NBC News and Fox News reported the thinly-sourced claim without caveats, whereas The Atlantic and Business Insider tacked a cautious “Apparently” to the first part of their headlines.

However, The Atlantic included some broader information about the use of sound as a deterrent — suggesting that Spears’ music itself was not necessarily the issue, but the volume at which it was played was:

The thought is that Britney Spears is (for better or worse) synonymous with Western culture, and Somali pirates hate Western culture, so therefore, it deters them. And that’s half the story. While Britney Spears might be the music that irritates Somali pirates most, Long Range Acoustic Device (LRAD) defense systems have been in use for a while. LRADs blast walls of sound which bring people to their knees, and have been used to quell riots and deter pirates in the past. “In 2008, a British cruise ship successfully used LRAD to repel Somali pirates. LRAD is a proprietary product of the LRAD Corporation, who make a significant portion of their sales from commercial shipping,” Fast Company reported.

Essentially anything played that loud would be unbearable. And Britney Spears is just the weapon of choice. The other deterrent for Somali pirates would be the small fact that a vessel that is armed with an LRAD probably has people armed with guns onboard.

In July 2021, when Spears and her controversial conservatorship was in the news, Face2FaceAfrica revisited the popular claim. That site included a video published to YouTube on October 29 2013 (purportedly showing the music being played at sea), and grating audio from the video aligned with its reiteration of The Atlantic‘s context:

A report by The Atlantic at the time said that the pirates were likely less scared by Spears herself and more by the volume her songs are played. The report added that Long Range Acoustic Device systems have been used to crack down on rioters and deter pirates in the past, blasting “a wall of sound which bring people to their knees.”

A long-circulating meme (shared to Imgur in February 2022) claimed that British Naval Officers frightened Somali pirates away by playing music by Britney Spears in October 2013; purported video of her music being played at sea was linked in a 2021 item about the claim. The story appeared to be sourced otherwise almost entirely from an October 2013 tabloid item and a statement by one person. An article from The Atlantic (where “apparently” appeared in the headline) indicated that “anything played that loud would be unbearable,” postulating that if the claim was accurate, Britney Spears was “just the weapon of choice.”