A photograph shows a real and unaltered "modernist Christmas tree" in Paris, which resembles a butt plug.

In December 2019 a number of Facebook users shared photographs and memes depicting a purportedly modernist Christmas tree in Paris, France — which also happened to resemble a giant version of a certain type of sex toy: 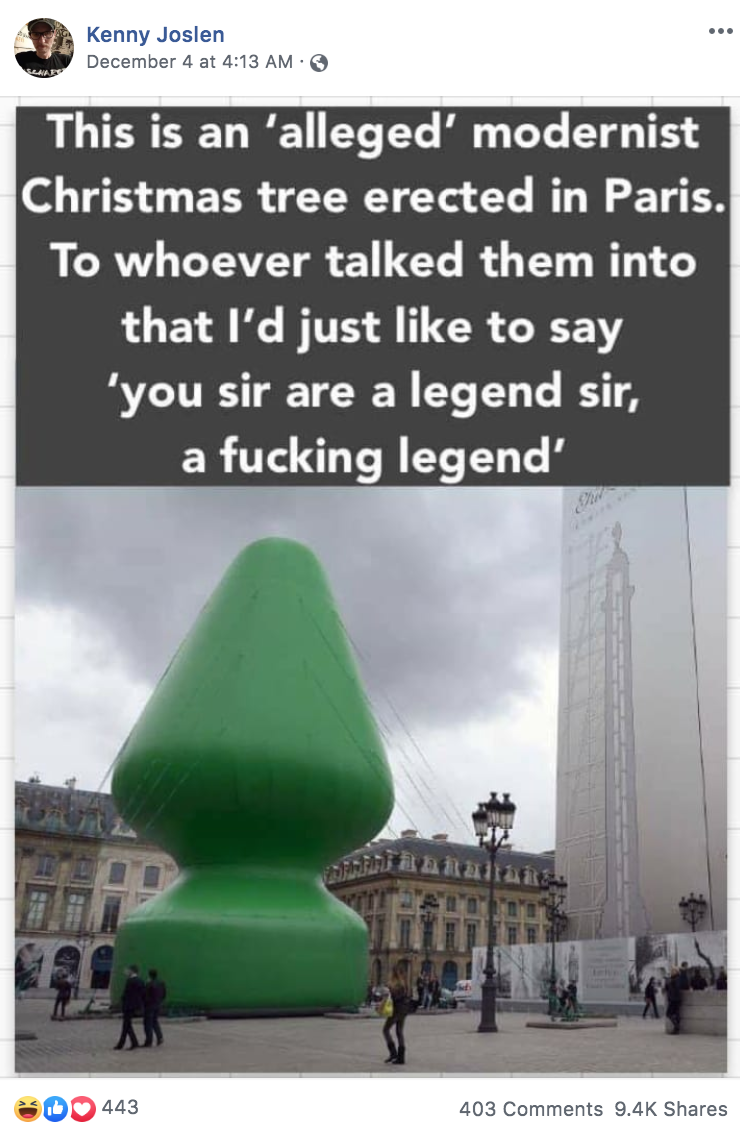 In the post above, atop a photograph of the Christmas tree is text reading:

This is an ‘alleged’ modernist Christmas tree erected in Paris. To whoever talked them into that I’d just like to say ‘you sir are a legend sir, a fucking legend’

So suggestive was the shape of the “‘alleged modernist Christmas tree erected in Paris,'” the meme didn’t even need to spell out the resemblance to receive thousands of shares on that one post alone. The poster didn’t share any commentary alongside the meme.

One day later, the same meme was shared to Reddit’s r/cursedcomments, as well as r/TIHI (“thanks, I hate it”):

thanks, I hate Christmas trees from TIHI

Commenters on the post generally did not debate whether the image was accurately described, sticking instead to puns and off-color jokes about the tree’s resemblance to a sex toy. As it turns out, the images were described in a partially accurate fashion, but they were also more than five years old in December 2019.

The Los Angeles provocateur [artist Paul McCarthy], whose aggressive sculptures, installations and videos have in the past depicted Snow White in sexually compromised positions and figures wearing George Bush masks copulating with pigs, had installed the inflatable sculpture in the middle of Paris’s elegant Place Vendôme, home to the French justice ministry and the Ritz hotel.

There was plenty of international reporting on the “butt plug Christmas tree” appeared on October 20 2014. By that time, McCarthy had been physically attacked over the sculpture, and it had already been destroyed by vandals.

In initial reporting on the chain of events involving the tree’s erection, controversy, and its destruction, McCarthy said that he was indeed inspired by the similarities between that type of sex toy and Christmas trees:

A controversial artwork in the centre of Paris said to resemble a giant green sex toy was apparently vandalised overnight [on October 17 2014], after critics decried the 80-foot installation as a “humiliation” for the French capital.

Called “Tree”, the piece by US artist Paul McCarthy was erected in Paris’s upmarket Place Vendôme on [October 16 2014] as part of the FIAC international art festival which [began on October 19-20 2014] … McCarthy has asserted the piece is indeed a Christmas tree, but admitted to Le Monde [on October 17 2019] that he was partly inspired by the shape of a butt plug.

“Originally, I thought that a butt plug had a shape similar to the sculptures of [Romanian artist] Constantin Brâncusi. Afterwards, I realised that it looked like a Christmas tree,” the artist told the newspaper.

Memes about a “butt plug Christmas tree erected in Paris” continued spreading after it initially went viral as part of an art festival unrelated to Christmas in October 2014. The piece was real, and its creator stated outright that it had been inspired by Christmas trees’ resemblance to that type of sex toy, but it only stood for roughly a day before vandals deflated it. McCartney opted not to restore the piece.