The Canadian government will give its citizens $2,000 Canadian a month for four months as the country deals with the COVID-19 outbreak.

On March 25 2020, social media users quickly drew comparisons between the help Canadian citizens are receiving from their government and a bill passed in the U.S. Senate.

On Twitter, the comparison was spread most heavily in a tweet shared more than 100,000 times; the user wrote, “Did I see you Americans are getting a one-time $1200 check to cover COVID unemployment? Because Canada just announced $2000/month for the next four months.” 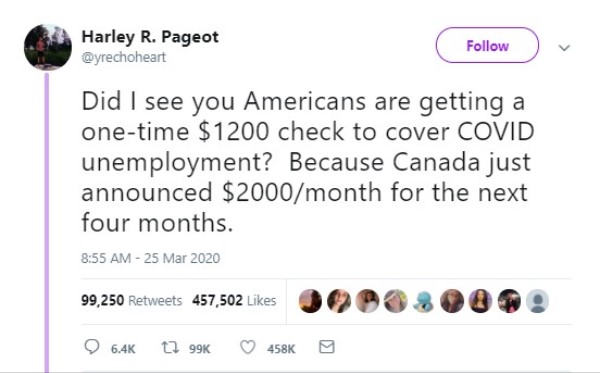 Similarly, a Facebook post promoting a similar claim — “Canada just passed their stimulus… $8,000 per person – $2k per month for four months” — the same day was shared more than 31,000 times on the platform. 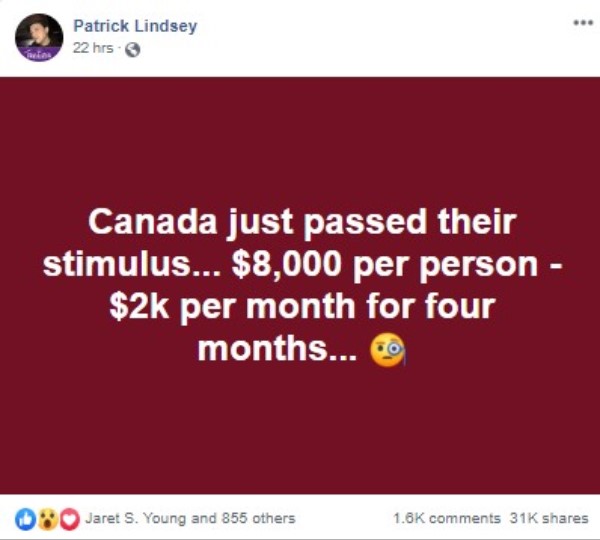 The aid package announced by Canadian Prime Minister Justin Trudeau and his administration does indeed offer $2,000 Canadian dollars (equivalent to around USD$1,400) per month — to people who have lost their jobs because of the disease. People who many not be unemployed but who are self-employed are also eligible for the four-month relief package. According to Trudeau, applications for the relief program will be available online starting on April 6 2020, with distribution of the benefits to begin within 10 days after filing.

“This is an unprecedented situation with an overwhelming demand by Canadians to get money as quickly as possible,” the prime minister said. “We need to make sure we’re getting that money out quickly but also reliably to Canadians and that means doing things that government hasn’t done before and scaling up our processes extremely quickly.”

The Canadian relief package will also suspend payments in the country’s student loans program for six months without interest accruing during that period. At the time of Trudeau’s announcement, more than 2,700 cases of COVID-19 had been reported in the country, with at least 25 fatalities connected to the disease.

By comparison, the bill passed in the United States Senate would also include a four-month boost for people receiving unemployment benefits; it would add an additional $600 per week during that period on top of the benefits recipients already get through their state unemployment benefit program. Also, as CNN reported, the USD$2 trillion package would also establish a similar benefit program for people who do not qualify for standard unemployment benefits — independent contractors, self-employed workers, and “gig economy” workers on top of those whose employment status has been affected by the spread of the disease.

The one-time $1,200 payment included in the bill also comes with an income cap; recipients must be single and earning less than $75,000 a year to get the full amount, with the payment decreasing if their income exceeds that point. Individuals making more than $99,000 a year would not qualify.

Update, April 15 2020: For additional information on the current status of coronavirus stimulus payments in the United States, or if your deposit has not arrived, please visit:

Where is My Stimulus? How to Get Your Missing IRS Coronavirus Check