United States senators have been given guidance cards "to use when seeking assistance" when approached by reporters.

On January 16 2020, as the impeachment trial of United States President Donald Trump was just beginning, a CBS reporter claimed on Twitter that his organization had obtained a flashcard “that was being given to U.S. Senators ahead of the #ImpeachmentTrial on tips to avoid reporters.” 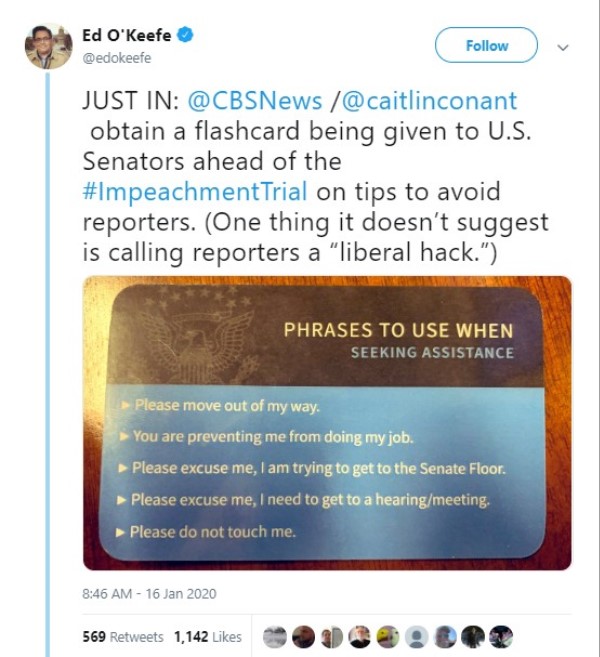 He added, “One thing it doesn’t suggest is calling reporters a “liberal hack,” a reference to Sen. Martha McSally (R-Arizona), who used that phrase to insult CNN reporter Manu Raju when he asked if she would consider new evidence in the upcoming impeachment trial. The insult was later promoted by a Twitter account supporting Trump’s re-election campaign.

The card bore the title, “Phrases to use when seeking assistance.” It included responses such as:

Liz Johnson, a spokesperson for Sen. Mitt Romney (R-Utah), responded to the original tweet saying that these types of cards had been distributed in the past by both the US Capitol Police and the Senate Sergeant-At-Arm’s office.

“This represents longstanding best practices from @SenateSAA & @CapitolPolice for safely de-escalating confrontations with *protesters* and it’s provided to Hill staff routinely,” she wrote. She also posted a photograph of an unmarked card bearing similar instructions: 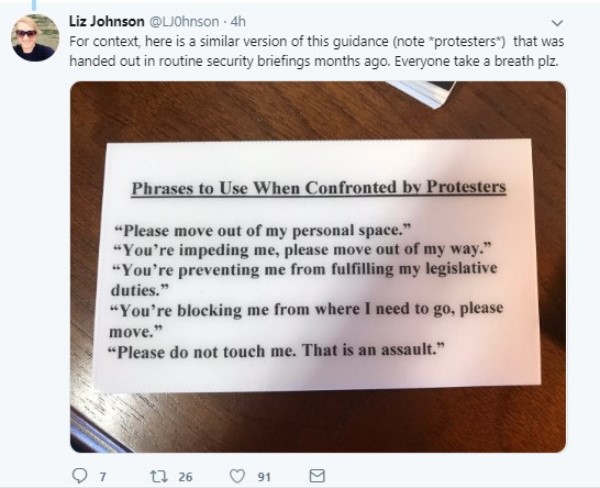 “Everyone take a breath plz [sic],” she wrote.

O’Keefe followed up his claim by saying that CBS had contacted both offices seeking comment, prompting a response from Matt Whitlock, a senior advisor to the National Republican Senatorial Committee.

“These are normally intended to be kept secret because the words act as code to CPD so I’ll be curious if they comment,” Whitlock wrote.

O’Keefe’s claim came amid a dispute over access to the trial; both the Sergeant at Arms and Capitol Police will restrict access to Senate members during the proceedings, and television coverage will reportedly depend on footage provided by the Senate Recording Studio.

On January 15, 2020 broadcast and cable networks sent a letter to Senate Majority Leader Mitch McConnell or Kentucky asking for C-SPAN cameras to be used instead. “C-SPAN has extensive expertise in covering all aspects of Congress and a commitment to the institution that makes them ideally suited to this task,” the letter reportedly said:

C-SPAN and the networks share resources to cover historic events such as this and we all believe that the cameras C-SPAN could provide for all our viewers would well serve the American viewing public and our democracy.

It is not clear whether the claims about the flash card are due to a misunderstanding or if the cards have been reappropriated in order to give journalists the same treatment as potentially violent protesters. We have contacted the Capitol Police, the Senate press gallery as well as O’Keefe, and the White House Correspondents Association seeking comment.