One of the explosions in Beirut, Lebanon in August 2020 was "atomic" in nature.

Disinformation and unprompted speculation soon followed a pair of explosions that rocked Beirut, Lebanon on August 4 2020 —  though at least one user quickly deleted his tweets on the incident amid criticism.

Reporter Chris Palmer posted footage of one of the blasts and rejected initial reports on its cause, writing:

The mushroom cloud forms outside of the factory. There is no question that was an atomic bomb. That is a controlled detonation.

If every firework went off at the same time it wouldn’t do that. A fireworks factory exploding wouldn’t blow out windows 10 miles away.

Palmer’s initial post containing the footage was shared more than 2,000 times on the platform before he deleted both of his speculative statements. However he later doubled down on his skepticism, posting another video taken after the blast and writing, “A fireworks factory did this? OK.” 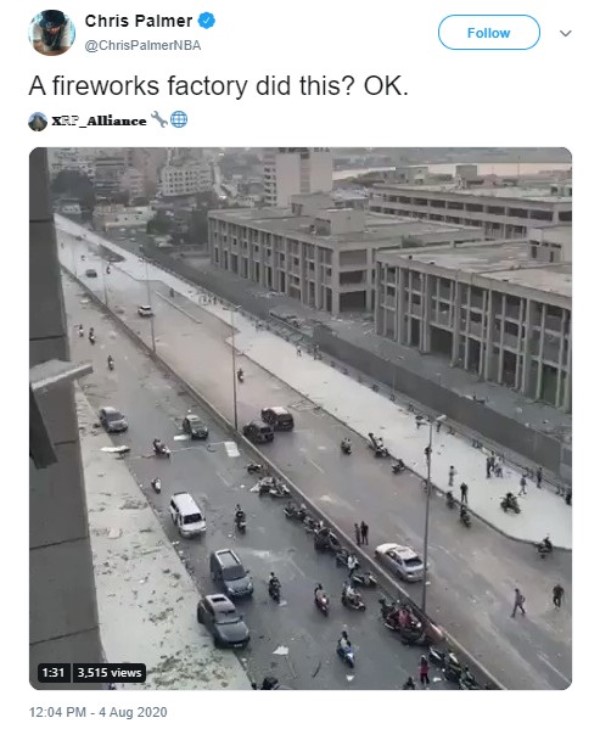 The cause of the explosions has not been confirmed, but The Guardian and other outlets have reported that government officials suspect that it involved ammonium nitrate that had been stored inside a warehouse. Prime Minister Hassan Diab said that 2,750 tons of the material were being stored in a warehouse believed to be the site of at least one of the explosions.

Diab said that an investigation would produce “revelations that will be announced about this dangerous warehouse which has been present since 2014.” There have been no credible reports of the explosion being “atomic” in nature.

According to the BBC, the Lebanese national health ministry attributed 73 deaths to the explosions, as well as injuries to more than 3,000 other people.

While Palmer, an author and former reporter for ESPN, expressed skepticism about the explosions, the right-wing conspiracy blog Veterans Today posted a more pointed accusation — before hedging its bets:

Breaking: Israel Nukes Beirut – Two explosions in Beirut, one a conventional guided bomb followed by a small nuclear weapon. The target seems to be an Iranian/Hezbollah missile storage facility.

While Veterans Today promotes itself as serving the veteran community, its content and the work of senior editor Gordon Duff has come under criticism for years, as the Southern Poverty Law Center (SPLC) reported in 2011:

Duff’s anti-Israel articles get a lot of play, and are often quoted or linked to on other conspiracy sites as well as on white nationalist sites like Stormfront and White News Now. Indeed, the anti-Israel bent on VT can slide pretty quickly into overt anti-Semitism. J.B. Campbell, a self-proclaimed founder of the militia movement, wrote this past November on VT: “Since Jews control every important aspect of our lives through banking, finance, law, war, food & drugs and entertainment, we are literally floating on a reservoir of truth blocked by a dam of lies… . The Jews have poisoned our minds for a long time, certainly for all the time that we’ve been alive.” Campbell also claims that Jews control the Federal Reserve and the US Army.

Duff himself has been quoted as saying:

About 30% of what’s written on Veterans Today, is patently false. About 40 percent of what I write, is at least purposely, partially false, because if I didn’t write false information I wouldn’t be alive.

Politico has reported that the content on Duff’s site took another turn in 2015, after it entered a partnership with the “slickly designed, anonymously authored” blog South Front, which was registered in Moscow that April — around the same time Russia “was ramping up its influence operations” against Western countries. “Since then, the site has consistently published articles that push the Kremlin party line, both from its Russian partner and its own contributors,” Politico reported.

American President Donald Trump added to the speculation during a briefing hours after the bombing, claiming — without evidence — that it was an attack.

“It would seem like it, based on the explosion,” Trump said. “I met with some of our great generals and they just seem to feel that it was. This was not some kind of a manufacturing explosion type of event. This seems to be according to them — they would know better than I would — but they seem to think it was a attack. It was a bomb of some kind.”

Veterans Today cited Trump’s remarks as “confirmation” for a post accusing Israel of “hitting Beirut with [a] nuclear missile”: 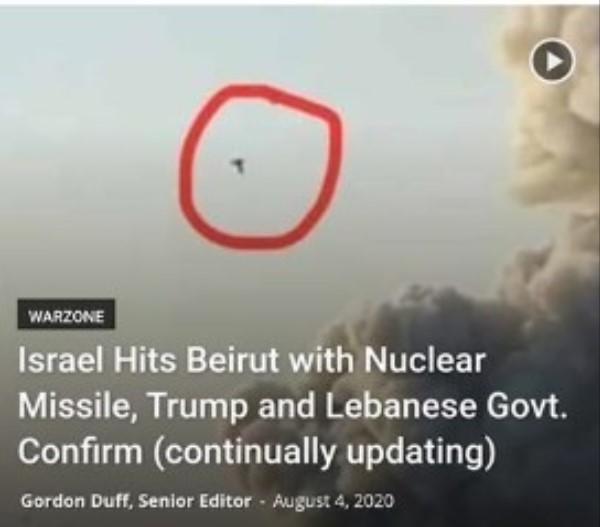 The post included a photograph bearing the caption, “Israeli Delilah missile carrying 6 kiloton (6000 tons of TNT equivalent) nuclear missile (unretouched photo via VT Damascus) Tineye says this is a unique image and doesn’t appear anywhere on the web. We, however, are always suspicious when something seems ‘too good to be true.'”

The photograph also spread via Facebook, as users reproduced it alongside text further pushing blame onto Israel: 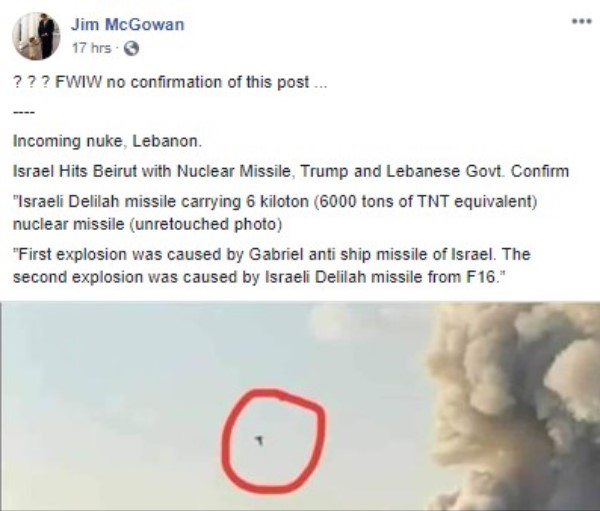 But Alistair Coleman, who covers disinformation for the BBC, has refuted that accusation on his own Twitter account, noting that the alleged “missiles” spotted in videos circulating online are actually birds:

Some people are posting images and clips claiming some sort of missile hit the site of yesterday’s Beirut explosion. Bird. pic.twitter.com/K3JwpaUtF6