You can build an effective space heater with a clay or terracotta pot and candles.

Going by the six-figure share count on the above February 15 2021 post, lack of heat and options likely drove interest into what was a fairly simple solution to a very common problem at the time — very cold weather, lack of insulation in buildings, and little, if any, indoor heating. Labeled a “life hack” for “fellow Texans,” the original poster claimed that the raised terracotta pot over a few candles was “heating up the room FAST.”

Another very good technique is make a candle heater, all you need is some candles and a clay pot. Put the pot over the lit candles, but have it hovering over them, with the open side down. Clay has a wonderful ability to retain warmth, and make those candles more useful pic.twitter.com/ASCXf6o8La

Posts sometimes said clay had an ability to “retain” heat, but rarely did they explain how heat from what appeared to be four tealights translated into enough heat to effectively function as a space heater for an entire room.

Schematics for versions of the clay pot space heater were not new as of February 2021; a reverse image search first crawled a “Life Hacks #2324” image advising the method in May 2014: 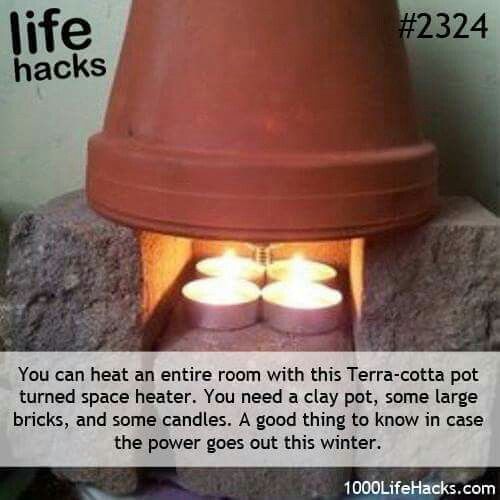 The photo showed a mechanism for raising the clay pot (typically cinder blocks or a trivet) and four small candles underneath; the text on the image read:

You can heat an entire room with this Terra-cotta pot turned space heater. You need a clay pot, some large bricks, and some candles. A good thing to know in case the power goes out this winter.

Google Trends data for February 2021 indicated a “Breakout” level of interest for the terms:

Tip for heating a room with a candle, clay pot, and bricks. from texas

As dire conditions persisted in Texas, Facebook users posted about hoping the method would work:

Still no electric or heat, found an open Target and got more candles. We’re going to try to build the clay pot heater. No updates on when power will be back on. We’re hanging in there.

A common theme evident in the many posts about the clay pot space heater hack was hope, as well as desperation. Supplies were in short shrift, and snowed-in Texans really needed solutions to stay warm.

There was a lot of discussion about the technique, making it difficult to track down legitimate information about whether it worked, and if so, how well. In comments on the various Reddit threads linked above, users typically expressed skepticism that the clay pot space heater worked. One commenter on the February 2021 r/Texas thread responded:

It’s a hoax. How should a flower pot increase the heat output of a candle? There is no way that this can work but there is a video about it.

Another Reddit commenter observed what appeared to be a poor risk-to-reward ratio, writing:

Yeah I’m an insurance adjuster and this just looks like an epic way to burn your house down to me.

The version posted to r/mildlyinfuriating espoused the stance that the clay pot space heater appeared to be magical thinking:

This terracotta pot ‘trick’ to heat your home… from mildlyinfuriating

An undated post on SkilledSurvival.com dating back to at least 2018 was predicated on the author’s interest in the idea heaters could be “candle-powered.” The examination was very detailed and worth reading, but one section explained:

How much can you really heat up a room with one of these candle heaters?

“Technically,” it’s the same as you can without one.

The first law of thermodynamics states:

The total energy in a system will remain constant.

Burning the candle releases stored chemical energy, converting it to heat and light.

The amount of energy released is the same whether you have clay pots or not.

By adding a candle heater above the flame, you don’t add any additional heat to the room.

But they’ll only last a few hours before you need to replace them.

However, the author subsequently said:

The thermodynamics laws are still valid (as they always will be).

But these laws can also miss the point. The laws don’t always do a great job of accounting for the real-world variables such as radiant heat vs convection and floor vs ceiling location.

The goal of these heaters is to make a human feel warmer closer to the floor. These candle heaters can do just that.

Another section emphasized the use of discretion and extreme care, adding:

[Clay pot space heaters] can be extremely dangerous, especially if you let them burn unattended. Don’t leave them [lit] if you’re leaving your home and never leave them lite while [you’re] sleeping. If too many candles are put into a very tight space, all the paraffin wax will melt. This wax can then become lit (not just the wick). A large fire can begin spilling out of the clay pot setup, and the liquid wax may drip down and out. Candles are a leading cause of house fires, and so you should take the same level of precaution.

Look at it this way. According to Wikipedia, a single tealight has an energy output of about 100 BTU/hr. A small space heater, capable of heating a small room, is 5000 BTU/hr. Thus, you actually would need fifty candles to heat the room as efficiently as a space heater, instead of just four. So let’s suppose a space heater would take one hour to heat the room up. It’ll take the candles over twelve hours to do the job (considering the burn-life of a typical tealight is well under twelve hours, we have a serious problem!). And remember that this is under the “ideal” conditions, where you’re not losing heat to the outdoors more quickly than the candles can produce it. Since the image says, “A good thing to know in case the power goes out this winter,” they’re suggesting very non-ideal conditions.

“So what,” you might think, “It’s not just the tealights! It’s also bricks and a clay pot!”

Yep, and the bricks and the clay pot do not add a single BTU to the arrangement. They do not, can not, will not magically multiply the amount of heat produced by the candles. What they do provide is a way to concentrate that heat. So even though the rest of the room is cold, if you sit right next to this little heater, and hover your hands over it, you’ll warm up, and be fooled into thinking the whole room is warming up as much as your hands are.

So if you are in a dire situation, the setup can work — to an extent. But the rather large caveat, as the London Fire Brigade pointed out during a 2013 cold snap, is the significant risk of fire involved:

“This heating system is unsafe. As a fire investigator, I see dozens of fires every year, including fatal fires, that are caused by people using alternative forms of heating and lighting, most of which include a naked flame.

“Candles and tea lights can be extremely dangerous – a small gust of wind can cause an innocent candle flame to set light to objects nearby if left too close.

• Candles need to be used in a safe, fire resistant holder or container – as you can see in the video, the flower pot would only need the slightest knock to cause it and the candles to fall.
• Candles need to be supervised at all times – so blow them out if you need to leave the room.
• Don’t cover candles with anything – anything placed over a candle flame will get very hot, and could melt or catch fire.
• Stick to radiators and if you’re especially cold, a hot water bottle is a much safer alternative.

In February 2021, the terracotta or clay pot space heater “life hack” spread virally on Facebook, but the advice had long been dissected and assessed (since at least 2011). If any sort of consensus on whether the hack popularized on YouTube “worked,” it was primarily that any output of heat was low. That finding did not exist in a vacuum, as the risk of open flame and candles used in that fashion largely outweighed the minimal amount of heat redirected by placing candles under a clay pot for heat. As such, we rated the claim Decontextualized, given that it is inadvisable to attempt building a clay pot heater without reading about the risks and benefits first.