Just one day later, Doocy’s Wikipedia entry featured a summary of the 2022 incident involving Biden, in contrast with characterizations of the moment as having involved a “hot mic”:

After a White House East Room press conference focused on the January 2022 economic decline, a departing Doocy inquired, “Do you think inflation is a political liability in the midterms?” President Biden responded, sotto voce, “It’s a great asset.” “More inflation. What a stupid son of a bitch.” Doocy reported that Biden called him later that day to “clear the air” over the comment.

Biden’s commentary was shared to Imgur in video format on January 25 2022 (with “hot mic” in the title):

Subsequently, people began to share posts about late Sen. John McCain and Doocy having an exchange caught on camera. One was a video post, titled “People calling Peter Doocy stupid is a long and storied Washington pastime”:

Another was an image of McCain: 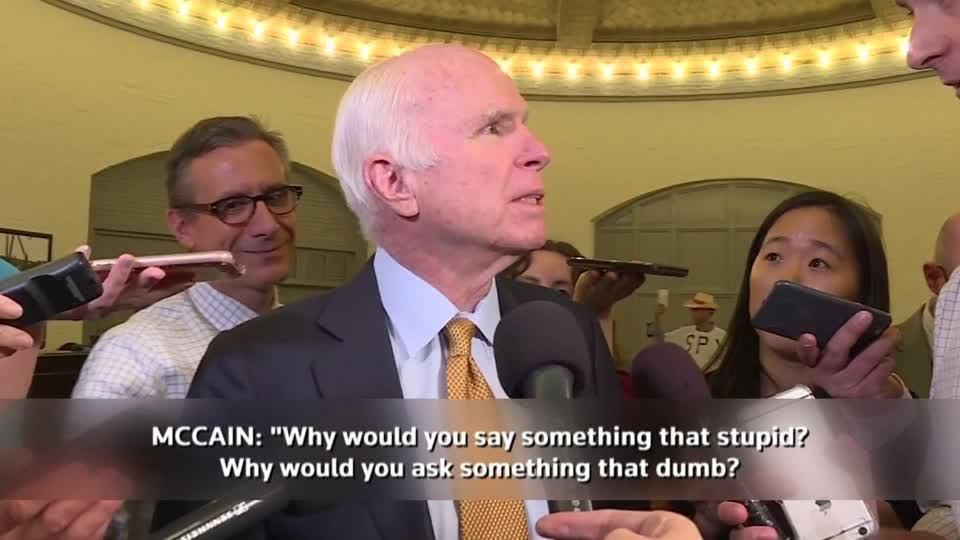 Doocy was barely in the shot, but a caption at the bottom read:

Sen. John McCain died in August 2018. An October 2017 YouTube clip on the channel of Sam Seder, “‘Why Would You Ask Something That Dumb?’ Grumpy McCain Explodes At Steve Doocy’s Son,” featured commentary and a clip of the exchange between Doocy and McCain (at around 1:47).

On October 18 2017, Mediaite’s “McCain Roasts Steve Doocy’s Son: ‘Why Would You Say Something That Stupid?’” reported on the exchange, transcribing Doocy’s initial remarks to McCain and adding McCain’s additional comments:

“Has your relationship with the president [Trump] frayed to the point that you are not going to support anything that he comes to you and asks for?” Steve Doocy’s son asked McCain in the halls of the Senate.

“My job as a United States senator, is a senator from Arizona which I was just re-elected to. You mean that I am somehow going to behave in a way that I’m going to block everything because of some personal disagreement?”

“That’s a dumb question,” he concluded.

After President Joe Biden called Doocy a “stupid son of a bitch” in January 2022, clips and transcriptions of the late Sen. John McCain’s similar encounter with Doocy recirculated. McCain indeed asked Doocy why he would “say something so stupid” and why he would “ask something that dumb,” in response to Doocy asking if he intended to not support anything proposed by then-President Donald Trump.