In October 2018, Facebook user Matt Gaelitz shared a slide titled “Conservative vs. Liberal” along with a status update:

Taken at a California public high school this year. This is what indoctrination is all about.

On June 4 2018, the same image was shared by the page “Being Classically Feminine” (copied to Instagram) alongside the claim that it was shared by an administrator for the page “Radical Liberty”:

(JL) This was posted by one of the admins at Radical Liberty, who is a high school student in California. This is a very real picture of what public high schools are teaching students today. “There is no indoctrination in our schools! LOL” “Teachers deserve higher pay!”

The following day, the image was shared to Reddit twice — once on r/The_Donald, and once on r/conservative:

On Imgur, the most upvoted comment was “it was a student presentation, but keep up that fake outrage, homie”:

Apparently, this was snapped at a school in California. The absolute state of that state. pic.twitter.com/uLn4IoE3qk

Under “Liberal,” it read:

On June 7 2018, the now-dormant page “Radical Liberty” shared the following commentary and some claims from someone who claimed to have been the person who originally posted it. That individual, who only described themself as “D.C.,” refused to provide any verifiable information about the image or its context:

(D.C.) Hello everyone. So I have finally found time to actually write this full-length article about the picture I shared the other day. Thanks for waiting.

Let’s start by setting up some ground rules first:
1) No, I will not reveal my identity. If you already know it, I would ask you to keep it private.
2) No, I will not reveal my high school or teacher. This post is not meant to expose them specifically. It’s only to describe my own experiences. Some people do know—and I would ask them to also keep it private.

So let’s start. I will begin with the context of the situation. How did it come about in the first place? It was a slide presented to us by the teacher during a unit about Reagan’s New Conservatism. We were asked to define what conservatism and liberalism were, then this chart was presented to us (as fact) to “define” what they really are.

Why did I not take a more full picture as people have suggested? For starters, phones aren’t even allowed to be used in class, so I did this rather secretively. Also, zooming out of the image might have made some of the information very hard to see. It’s important to realize that not everything can be caught perfectly with a phone.

How long has this been going on? Practically the whole year. This is the third time we’ve had one of these charts before—we had one comparing the extreme right and the extreme left (no picture unfortunately) and one comparing socialism versus communism (picture will be attached in the comments). They were both factually incorrect, and I even tried to argue about one of them (it was the only one the teacher was present for, we had a substitute for the others and the slides were already prepared).

Practically throughout the whole year I’ve had arguments with the teacher about the more political topics. Whether it is “fascism right wing or left wing?” or “should the AR-15 be banned?”, there have been major disagreements. Now, I will stop for a moment to give some credit. In regards to the Great Depression unit, some time was allocated to explore the right’s point of view. However, this was not done for pretty much anything else. The Civil War, Civil Rights, feminism, you name it, it was presented from the left’s point of view. One reason for this is actually not the teacher, but the textbooks we use–apparently even the teacher recognizes it has a liberal bias. Also, the sources used for information are generally left wing. Apparently, CNN is centrist according to this class!

An important piece of information to note here is the reason why I posted the picture in the first place. It was posted in a private group as a way for me to express my frustration with the chart. It was clearly biased and extremely misleading to those who do not know any better. I never intended for it to actually spread in the first place, which is why I didn’t post it on that page. I let one of my colleagues post it to her page because she personally felt that it was an issue, but it was never my intention to stir the pot with the picture. Many people will still call the picture fake—so be it. Many people will be disappointed that I didn’t reveal any identities—so be it. My goal was never to appease anyone.

Once again, thank you for all the patience.

In the comments, the poster shared another chart (“Socialism vs. Communism”), purportedly from the same class: 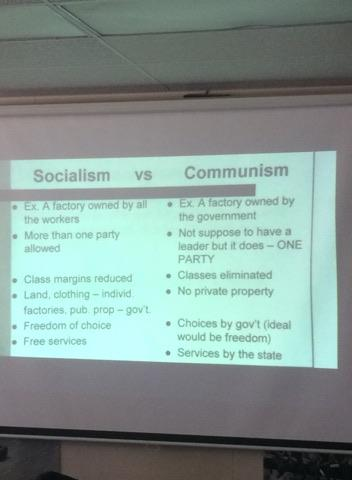 From D.C.’s follow up post on “Radical Liberty,” it was unclear how often the actual teacher was present, versus (for example) a substitute teacher. We were unable to find any other versions shared by any other students in the class, nor any comment from anyone claiming to have witnessed the “lesson” shown here.

Readers, then, only had the word of an anonymous Facebook user to indicate:

Despite this, iterations of the “Conservative vs. Liberal” California high school “indoctrination” accrued thousands of shares and engagements on Facebook, Reddit, and Imgur. However, the poster of the image declined to provide verifiable information, and it may have been misrepresented or taken out of context (such as being the work of a student or not a lesson but an example.) No students came forward about the “high school indoctrination” class in California from what we saw, only someone who only identified themselves by the initials ‘D.C.”

This is not a coordinated indoctrination attempt by California high schools, nor is it part of any individual curriculum that we have been able to find. However, we have also been unable to find out whether this was something presented as part of an individual assignment or whether it was a student presentation, as one commenter claimed. Therefore, we rate this claim Unknown.