A photograph of a law enforcement officer pointing his weapon at a young white woman was taken during a demonstration in Portland, Oregon.

A Black photojournalist’s work recirculated online in July 2020, though without credit to him and sometimes eliding the context of his original photograph.

Freelancer Crush Rush first took the photograph on May 31 2020 during protests against police brutality in Columbia, South Carolina. His original Facebook post displaying the photo of an unidentified officer pointing his firearm at an unarmed white woman was shared more than 10,000 times on the platform.

“It went viral on the first day that I posted it. It was such an emotional day; I was tear-gassed,” he told us. “I watched people get detained. I got into it with an officer myself.”

Rush, whose work has been published by several news organizations, said that it was uncharacteristic of him to argue with an officer. However, he said, the protesters that day had been told that a local curfew would not take effect until 6 that evening, around three hours after he took the photograph. More than a dozen people were reportedly arrested the day of that demonstration, though most of them faced looting charges at a time.

Rush explained the context behind the photograph in more detail in his post:

On May 31st protesters marching to the Columbia Police Department were cut off by a line of SCDC (South Carolina Department of Corrections) and SLED (South Carolina Law Enforcement Division) officers. There was mass confusion about curfew with protestors not knowing that a 3pm curfew had been set due to agencies reporting that curfew was set for 6pm. Offices in line were not advising protesters about a curfew in effect and also did not answer my requests about curfew times while slowly advancing their line and demanding that protestors go home.

Protestors held their ground (due to thinking that they weren’t breaking any laws, and was illegally being told to disperse) and as the SCDC/SLED line advanced they started snatching and detaining peaceful protesters unexpectedly.

Before the moment of this photo the woman’s friend was sitting on the ground and was pulled by an officer and taken behind the line quickly which caused the woman in the photo ask frantically what was her friend being detained for / what was he being charged with. As her friend was being dragged behind she stepped forward while continuing to ask what was happening and why. The SLED officer then raised his less lethal shotgun and pointed at her. She side stepped and the officer side stepped with her keeping the gun trained on her. According to time stamps, the officer had his gun raised for 12 seconds (I originally posted 30 seconds as it felt like forever and honestly I was shocked by what I saw. I’m human).

Fellow protesters in response to what they witnessed dropped to their knees and hands and yelled out don’t shoot! Others questioned why the officer felt the need to raise his gun at her while she clearly was no threat and both of her hands were shown and demanded that his superior do something.

The more recent spread of Rush’s photograph online has several facets; some users have reposted it, apparently thinking it was taken in Portland, site of an incursion by operatives from the Department of Homeland Security: 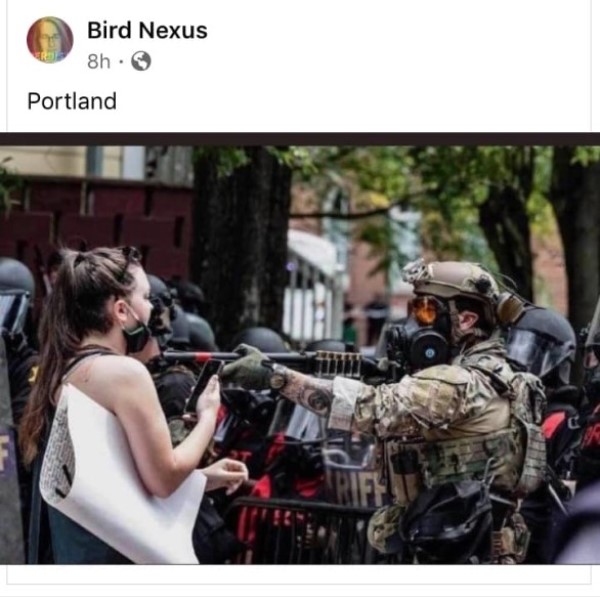 Rush called that use of the photo “very problematic,” but told us he understood why other other and users would share it while expressing more of a sense of disbelief that the officer’s actions would be tolerated.

“I can imagine why people don’t think this is a real photo,” he said. “Where else could you see an unarmed white woman of college age with a weapon trained on her that close? You don’t see it anywhere. It isn’t something that has been portrayed in the news or social media or any type of circles forever. It’s always been an unarmed Black person — specifically a male most of the time — and a law enforcement officer. So when you have that photo that’s frozen in time, you can’t justify it. Because you can see both of her hands; you can see that she has small shorts; you can see that she’s not carrying anything that presents any type of danger to the officer. Yet the result is the same.”

But as disinformation researcher Joohn Choe reported on his own Facebook page, the photo was spread more intensely in July 2020 and falsely linked to a separate series of protests in Portland, Oregon. One factor in this second spread was a set of identical posts written in Chinese and spread around several blogs describing the encounter by saying:

Of course, there are many such things. In South Carolina, a girl was intercepted by a heavily armed SWAT special weapon tactical team, and the girl also only held a mobile phone and did not pose any threat. Is it the usual law enforcement standard of the American police to aim guns at ordinary citizens? 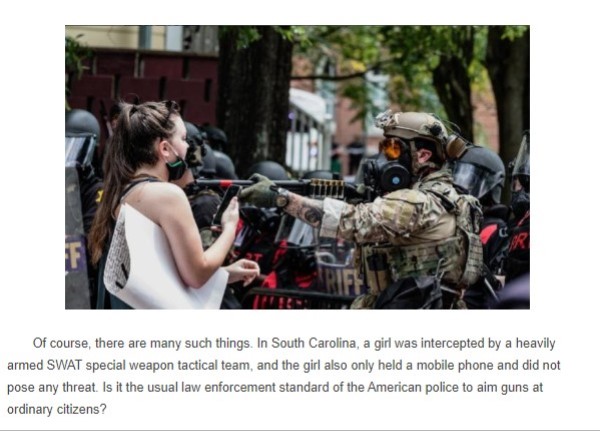 According to Choe, each of the sites claimed to have republished its version of the post from a separate Canadian website, “York Forum.” However, the story does not appear on that site.