High school students in Stevenson, Washington were asked about their willingness to smother a crying baby in a Google Classroom lesson in September 2020.

In September 2020, screenshots of a virtual lesson about the ethics of smothering a crying baby (which was purportedly posed to students in Stevenson, Washington) spread virally on Facebook and Twitter.

A September 17 2020 post from user Chellie Anne seemed to be the most popular of the posts (archived here): 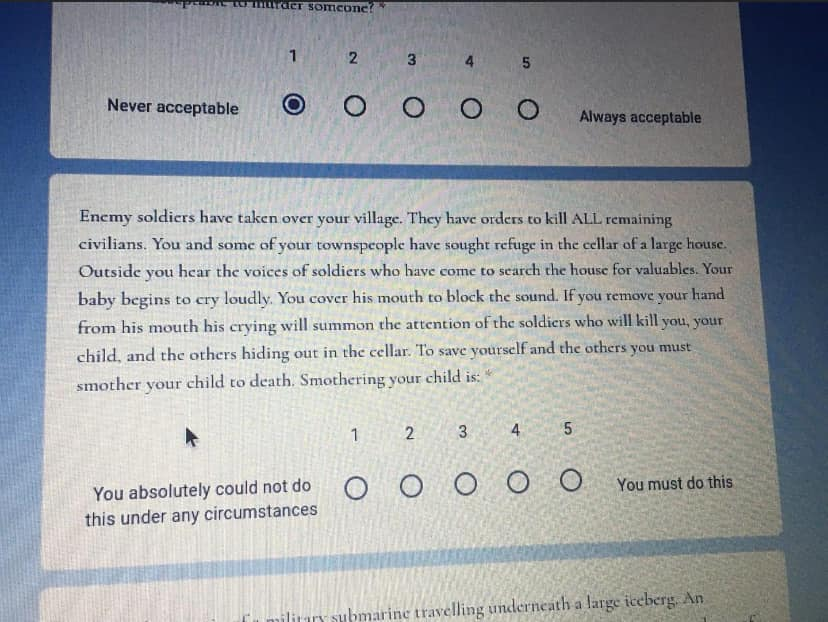 The question in the image was difficult to read, but it said:

Enemy soldiers have taken over your village. They have orders to kill ALL remaining civilians. You and some of your townspeople have sought refuge in the cellar of a large house. Outside you hear the voices of soldiers who have come to search the home for valuables. Your baby begins to cry loudly. You cover his mouth to block the sound. If you remove your hand from his mouth his crying will summon the attention of the soldiers who will kill you, your child, and the others hiding out in the cellar. To save yourself and the others you must smother your child to death. Smothering your child is:

A selection scale of one through five followed, with one being “You absolutely could not do this under any circumstances” and five being “You must do this.”

It appeared the post was originally shared by user Kevyn Miller on September 16 2020; Miller maintained that the question was posed to his child, who is a student in that district (archived).

On September 20 2020, Miller updated his post to include the following:

***EDIT***— We have been informed by the School superintendent that we will be updated [on September 21 2020]— –I was mistaken on the origination of the assignment being through Zoom. The assignment actually originated from Google Classroom– As we work with the School Superintendent, we will update the information found and presented so there is less speculation.

Miller’s original post remained under the edited portion. He claimed that the purpose of the lesson was to measure students’ willingness to obey orders, or conversely, pose a “threat to the system”:

A “question” that came over our 16yr old’s zoom schooling out of Stevenson, WA.

Make this go viral. This isn’t schooling, this is gauging an individual’s psychological demeanor so the “schooling” can verify who submits to “authority” and who could potentially be a threat to the system. This is testing before mass conditioning.

What pisses me off further is the situation implies no self defense. No arms. It literally proposes killing your own child as a viable solution to the situation vs being armed and rebelling against said “soldiers”.

Where’s the answer option that says shoot them in the face? Fight to the end. No, apparently you should kill your own to save yourself.

Some commenters simply replied — correctly — that this is a very old and very common “ethical dilemma” question:

This philosophical/moral “crying baby dilemma” has been around for a LOOOONG TIME. Google it.

Others on the post, however, were divided, with many agreeing the out-of-context purported question was alarming or indicative of some sort of educational indoctrination. Others, however, reported having encountered the question themselves in various educational contexts: in a forensics or English class, on a blog, as part of a video game, or referenced on the television show M*A*S*H.

Although the post attracted more than 1,000 comments, Miller himself commented with updates:

Update- School superintendent was contacted and immediately found issue with this. The “lesson” has been pulled and is being looked into.

We are pushing for full disclosure of the purpose/intent of this “lesson” as well as how it was to be graded and WHERE that information was going after being collected.

The super is new to the district and is seemingly taking it head on in all seriousness.

At least one commenter pointing out the parallel to the television show M*A*S*H linked to a clip on YouTube (“Saddest TV Moment: Goodbye, Farewell, and Amen.”) A description read:

Here’s the story: Hawkeye has gone insane and is spending time at a hospital. Throughout the episode, he tells this story about how they were able to go out to a beach and have a great day. Just playing at the beach. They all pile up on a bus to head home. Suddenly, they realise that the enemy is nearby, so they shut off the engine, turned out all the lights and everybody got quiet. Except this woman in the back who has a chicken that won’t get quiet.

That short clip was over three minutes long; at approximately 2:10, the character Hawkeye revealed that the “chicken” was in fact a baby:

This is the script from the final show of M.A.S.H.

Alan Alda’s character relates a story to the ‘Doc’ about escaping in a bus with Korean refugees. There were enemy troops nearby and they had to be silent or be killed. A lady in the back of the bus had a chicken which was making too much noise, so she strangled it to save the people on the bus from being discovered. As the story is told, the Doc probes further to find out that it wasn’t a chicken. In fact it was a baby. The mother suffocated the baby. This was the event that sent Alda’s character over the edge and into an asylum…..sad stuff.

Several other commenters likened the question to “The Trolley Problem,” a similar ethics exercise popularized by the television show The Good Place:

1. Not enough information to make a judgement about this. What class was it? AP? College credit? Speech and debate? All influence the type of question posed.
2. This is just the trolley experiment worded differently. Which I was taught in high school.
3. This is a screenshot of the question. What was the lesson? West questions were being asked? Was this a personal assessment?

I am in this class. I was not offended by this question. Both my friend and I didn’t have any problems with this quiz. This is a morality quiz made by Princeton university, not the teacher themself. The instructions were to answer the question as if those were the only two options, it was not meant to put guilt on my peers and I. This quiz was for our Forensics class where we are learning about morals, ethics, and bias because it’s part of the criminal justice system. The teacher specifically told us that they are not trying to push their opinions on us, they are only trying to educate us on how complicated and complex morality is. This teacher has been doing an outstanding job during distance learning. Their lessons really get us thinking about the subject, they make me passionate to learn about the subject. Their slideshow lessons were very helpful and educating. All our teachers are trying and succeeding at teaching us during this hard time, and I personally think it is sad that this person is getting so much hate for only teaching us in a way that makes us really think about the topic at hand. Think about the fact that in only two years people my age can die serving our country, but some people are considering it wrong for us to answer this question.

Commenters also linked to a 2013 blog post by an assistant professor of psychology, which mentioned both the “trolley problem” and the “crying baby” question. She contrasted the two, writing:

There are many differences between these stories*, but the key one here is that “the trolley” is impersonal, and “the crying baby” is so very personal, defined by researchers as a “me hurt you” scenario. “The trolley” still involves “hurt you”, but the “me” has been removed – given critical space by the fact that you flip a switch to change the outcome of events, instead of using your bare hands to carry them out start to finish.

This distinction between personal and impersonal is to some extent the difference between the leader, making decisions on a map rather like a game of chess, and the solider on the ground actually killing another human being. This distinction is played out in people’s decisions – it’s much easier to decide to flip the switch in the trolley than to decide to smother the baby – and in their brains, where thought and emotion compete in two distinct but connected networks. There is not much competition in the impersonal situation; our emotional brains tend not to get drawn in, thanks to the distance of the switch, so it’s easy to make the utilitarian decision to sacrifice one and save five. The personal “crying baby” dilemma, on the other hand, will evoke strong activity in emotional regions of the brain, which must be overridden by non-emotional regions for you to decide to smother one child to save the town.

Others shared Miller’s screenshot, often with their own opinions about the subject matter. People also shared the same screenshot to Twitter, often with identical wording in their appended tweets or screenshots:

Does this seem like appropriate “school work” because sixteen year old students in Stevenson Wa sure are learning it? pic.twitter.com/rnJkcBWFWk

On September 16 2020, a Facebook user shared the subsequently viral “smother your crying baby” screenshot to Facebook; separate posts featuring his screenshot spread more widely. Although some readers were outraged by the claim, others correctly pointed out that it has been around in some form or another for years.

We have contacted the school district to ask whether the claim was accurate and to request additional context.