Participants in the DACA program for immigrants paid $891.2 million in taxes in 2017.

Shortly after a New York Times report appeared detailing years of financial dealings by United States President Donald Trump, various online posts took the opportunity to highlight the differences between his own reputed practices and those of communities he has demonized.

One post circulating on Facebook featured a table of findings listing tax payments from immigrants and compared it to the investigation’s findings: 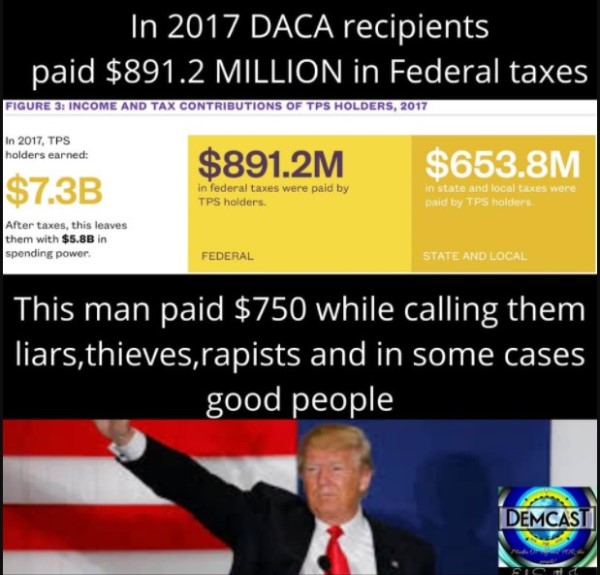 “In 2017 DACA recipients paid $891.2 million in federal taxes,” the graphic says, while “this man” (Trump) “paid $750 while calling them liars, thieves, rapists and in some cases good people.”

The post references participants in the Deferred Action for Childhood Arrivals (DACA) program. But the figure, taken from a June 2019 study published by the advocacy group New American Economy, actually refers to immigrants covered under a separate program: Temporary Protected Status, or TPS for short.

While both programs cover immigrant populations, they hold different criteria for entry. To be eligible for DACA, participants must have come to the U.S. before their sixteenth birthday while being under 31 years old as of June 15, 2012. The TPS program covers residents from certain specified countries who came to the United States fleeing specific circumstances, like a civil war or a natural disaster.

The study drew from data taken covering tax year 2017 from the U.S. Census’ American Community Survey, an annual program gathering demographic information from randomly selected households across the 50 mainland states as well as the District of Columbia and Puerto Rico. According to the NAE:

The study also noted that while TPS and DACA recipients might live in the U.S., they “are ineligible for almost all federal public assistance programs” including Social Security, the Supplemental Nutrition Assistance Program (SNAP for short, a.k.a. “food stamps”) and regular Medicaid coverage.

Two months before the NEA released its findings, a separate study conducted by the National TPS Alliance — a group specializing in advocating for TPS residents’ rights — as well as the Center for American Progress (CAP) and researchers at the University of Southern California estimated that protected residents paid a collective $4.6 billion in taxes per year. A third study published in September 2019 by CAP, meanwhile, determined that DACA recipients paid $5.7 billion in federal taxes and $3.1 billion in state and local taxes annually.

While conflating the DACA and TPS programs, though, the meme did accurately quote the Times’ report stating that in 2017, Trump paid only $750 in taxes while also not paying any taxes in 10 out of the previous 15 years “largely because he reported losing much more money than he made.” According to the newspaper:

The tax returns that Mr. Trump has long fought to keep private tell a story fundamentally different from the one he has sold to the American public. His reports to the I.R.S. portray a businessman who takes in hundreds of millions of dollars a year yet racks up chronic losses that he aggressively employs to avoid paying taxes. Now, with his financial challenges mounting, the records show that he depends more and more on making money from businesses that put him in potential and often direct conflict of interest with his job as president.

The graphic also accurately drew from the anti-immigrant rhetoric Trump has used since the very outset of his run for the presidency. In his April 2015 speech announcing his intention to seek the Republican presidential nomination, Trump said:

Trump’s administration has taken aim at the DACA and TPS programs. In June 2020 the Supreme Court struck down the administration’s latest attempt to rescind the DACA program in a 5-4 ruling. Three months later, however, the 9th U.S. Circuit Court of Appeals upheld the administration’s move to revoke TPS status for an estimated 300,000 participants from El Salvador, Haiti, Nicaragua, and Sudan, allowing them to possibly be subject to deportation.