Diane Sawyer did a recent "special report" about the ubiquity of items "made in China."

In January 2022, Facebook posts describing a Diane Sawyer “special report” about items “made in China” circulated on social media, either in copied and pasted posts or screenshots: 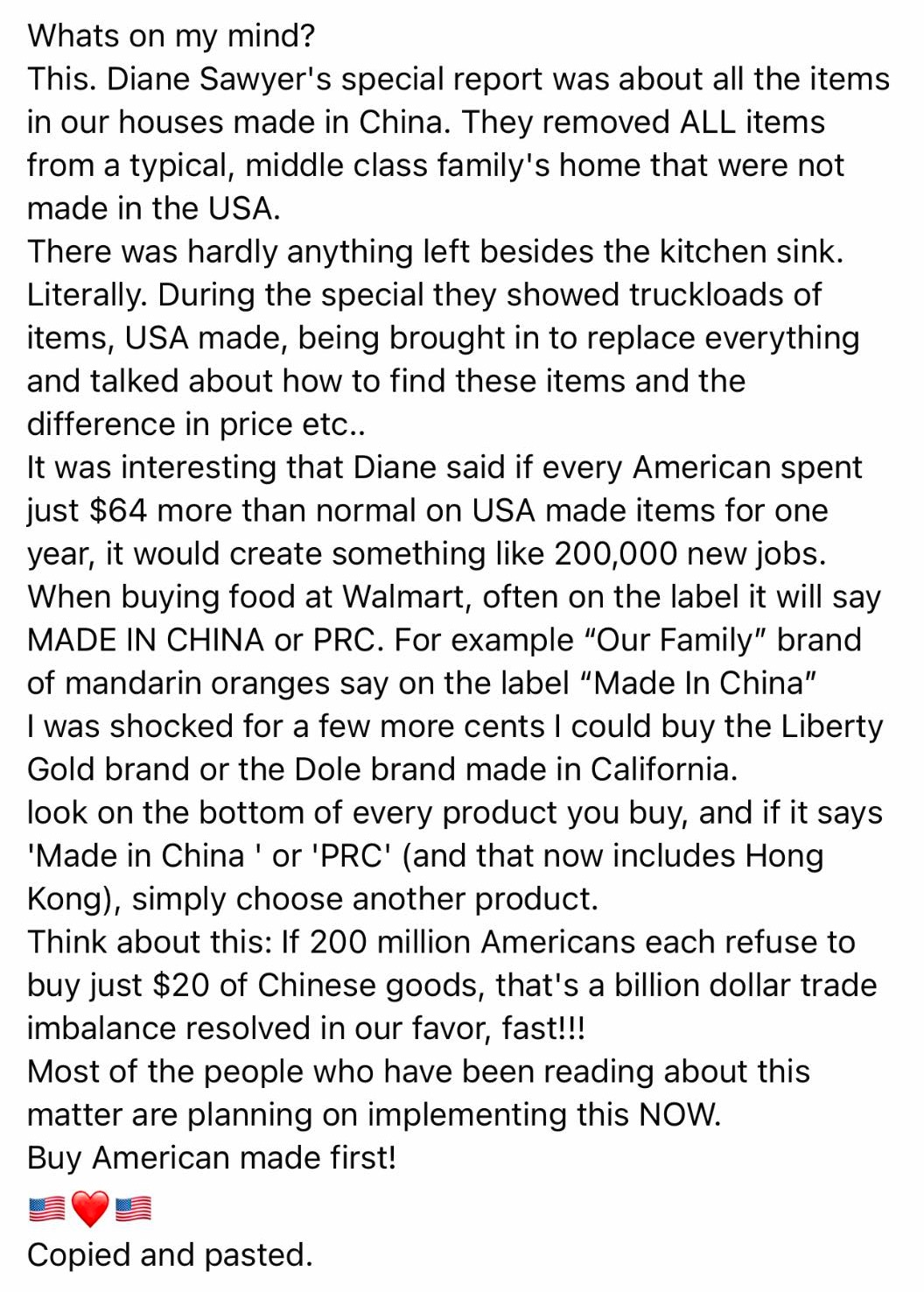 Diane Sawyer’s special report about all the items in our houses made in China. They removed ALL items from a typical, middle class family’s home that were not made in the USA.

There was hardly anything left besides the kitchen sink. Literally. During the special they showed truckloads of items, USA made, being brought in to replace everything and talked about how to find these items and the difference in price etc..

It was interesting that Diane said if every American spent just $64 more than normal on USA made items for one year, it would create something like 200,000 new jobs.

When buying food at Walmart, often on the label it will say MADE IN CHINA or PRC. For example “Our Family” brand of mandarin oranges say on the label “Made In China”

I was shocked for a few more cents I could buy the Liberty Gold brand or the Dole brand made in California.

look on the bottom of every product you buy, and if it says ‘Made in China ‘ or ‘PRC’ (and that now includes Hong Kong), simply choose another product. ALSO on the package at Wally World it will often say “packed at ___” which means it was shipped from china in 50# blue plastic barrels and packaged down wherever it says. BEWARE Wally World is probably the worst & biggest offender of purveying this garbage ! And synthetic textiles china is creating cannot be recycled! We have a million tons of this lying around in USA with no way to get rid of it if it’s not filling out landfills! Think about that for a moment!

Think about this: If 200 million Americans each refuse to buy just $20 of Chinese goods, that’s a billion dollar trade imbalance resolved in our favor, fast!!!

The economic power china has over us right now because people won’t stop buying their garbage is unbelievable! If we took everything out of our stores from china our economy would collapse and unemployment would be thru the roof! How did we give our power away like this so willingly? DOLLAR STORES and cheap goods!

Most of the people who have been reading about this matter are planning on implementing this NOW.

Send this to everybody you know. Let’s show them that we are Americans and Nobody can take us for granted. WE CAN DO BETTER!

If we can live without cheap Chinese goods in our lives. Buy American made first!
❤️🇺🇸❤️🇺🇸❤️🇺🇸❤️🇺🇸❤️
#BuyAmaricanMade

Facebook search returned a very popular version, shared several thousands of times and originally posted in August 2020, at which time it also spread on message boards. It began:

Did y’all see Diane Sawyer’s special report? They removed ALL items from a typical, middle class family’s home that were not made in the USA

… There was hardly anything left besides the kitchen sink. Literally. During the special they showed truckloads of items – USA made – being brought in to replace everything and talked about how to find these items and the difference in price etc..

While the posts hinted at a segment that was fairly recent and viewed by the poster, the posts were worded almost identically after the first one or two lines. Furthermore, Diane Sawyer left ABC World News in September 2014, several years before the posts about her “special report” concerning items made in China began.

The text of the circulating posts sounded familiar, and we were able to find an email chain version sent on August 6 2011. It began:

AUGUST 1st to September 1st
Well over 50 yrs ago I knew a lady who would not buy Christmas gifts if they were made in China .. Her daughter will recognize her in the following ..

Did y’all see Diane Sawyer’s special report? They removed ALL items from a typical, middle class family’s home that were not made in the USA ..

There was hardly anything left besides the kitchen sink . Literally . During the special they showed truckloads of items – USA made – being brought in to replace everything and talked about how to find these items and the difference in price etc . .

It was interesting that Diane said if every American spent just $64 more than normal on USA made items this year, it would create something like 200,000 new jobs!

I WAS SHOCKED SO FOR A FEW MORE CENTS I BOUGHT THE LIBERTY GOLD BRAND OR THE DOLE SINCE IT’S FROM CALIF .

Our search turned up an old, undated page on ABC News’ website, “Made in America,” first archived on November 3 2011. Alongside a photograph of a living room, text described slightly different proportions for spending-to-new-jobs ratio.

“China” was not mentioned in the short introduction to the series, leading us to believe that it gained ground after 2020 for reasons related to anti-Asian racism, thanks to bad actors and their responses to the COVID-19 pandemic:

As part of our [2011] series “Made in America,” “World News with Diane Sawyer” took on the challenge of trying to fill three rooms in a home entirely with 100 percent American-made products. Economists say that if every one of us spent an extra $3.33 on U.S.-made goods every year, it would create nearly 10,000 new jobs in this country. So we emptied out the living room, kitchen and bedroom of this Dallas home, and then filled it back up with American-made products. Take a virtual tour of the results and click on the red diamonds to see items up close and learn more about the products and companies that could be creating jobs right in your backyard. The prices of American-made goods vary widely. This is just one example of how you could furnish a home with American-goods. Click here to learn about companies that fit any budget and are manufacturing some, if not all, of their products in America.

ABC News alluded to an unspecified number of “Made in America” episodes in 2011; one such segment was uploaded to YouTube in May 2012. In November 2020, Facebook page “The Made in America Store” shared what appeared to be another segment in the series, writing:

Here’s a throwback to when the Made In America Store was featured on ABC World News Tonight with David Muir with Diane Sawyer* back in 2011🇺🇸 Our mission hasn’t changed – Buy American!

On March 1 2011, a Forbes blogger published an editorial about the series, “With ‘Made In America,’ ABC News Gets Trade Story All Wrong.” It began:

Sensation and hyperbole have become staples of the mainstream media, as they struggle to compete for an American attention span increasingly committed to blogs, Facebook, Twitter, and other social media. Even the venerable ABC World News has decided to indulge its worst instincts by airing—every night this week—a reality-based series called “Made in America.” Caveat Emptor: ABC is selling dangerous, nationalistic propaganda.

The gist of the series is that Americans don’t buy many U.S.-made products anymore and are therefore responsible for the persistent and relatively high rate of unemployment in the country. Last night’s episode featured a family that couldn’t find a single item in their home that was manufactured in the United States. To accentuate the point, the family takes a day trip, while movers are brought in to rid the house of all foreign-made items. Of course, at the end of the day, the family returns to a cavernous echo chamber, where they are amazed and ashamed by how much they’ve contributed to the hardships of their unemployed fellow citizens. By spending a little more on U.S.-made products, the storyline goes, Americans can put their countrymen back to work.

Later in the piece, its author added:

ABC’s proposition that Americans would support 10,000 new jobs by spending just $3.33 more (per year?) on U.S.-made goods obviously fails to consider the jobs lost by switching from imports to domestic or switching from savings (which is just money used for investment, which already supports jobs) to spending. Depriving foreigners of U.S. dollars just deprives U.S. producers of export sales.

A vague item on a watchdog news site dated March 2 2011 provided an initial air date, and criticized elements of the series:

On February 28 [2011], ABC World News with Diane Sawyer premiered a TV series called “Made in America” that ostensibly encourages viewers to buy American-made products to help spur U.S. job growth. In the first episode, a reporter tours the home of an average American family, discovering that most of the family’s belongings were made in foreign countries. To illustrate how remiss the family has been in buying American, a moving crew takes everything out of the house that is made in a foreign country. The crew rips out the family’s stove, carts off their furniture, beds and refrigerator, and takes virtually everything in the home away except a small vase with a flower in it. The family returns, shocked, to see their empty home. The series blames consumers for not purchasing American-made products, while failing to mention how major American corporations choose to manufacture their products overseas. Also unmentioned is the fact that ABC’s parent company, Disney, manufactures toys, including Mickey Mouse memorabilia and other goods, in Chinese factories. The show obscures the fact that consumers don’t choose where the products offered in their local stores are made, and doesn’t discuss the limited American-made products offered at ubiquitous big-box appliance, electronics, furniture, drug and toy stores.

At some point, the text about Diane Sawyer’s “special report” formed the basis of a Change.org petition, likely initiated in 2021. That petition’s request involved adding a “made in America” filter to Amazon search.

Facebook posts about Diane Sawyer and a “special report” about items “made in China” emerged as email forwards in 2011, the year in which Sawyer presented the segment on ABC World News. Searches on Google and YouTube autopopulated “Diane Sawyer Made in America 2021,” suggesting that many sharers were unaware the series was more than a decade old. Although the series existed, much of it was inaccessible due to link rot and website upgrades. One of the few existing ABC News links about the series stated that “if every one of us spent an extra $3.33 on U.S.-made goods every year, it would create nearly 10,000 new jobs in this country,” but the overall content of Sawyer’s “special report” existed largely in long-circulating, very outdated text posts.