A man had a heart attack after his wife tricked him into believing she placed his lover's decapitated head in the fridge.

On May 18 2019, the Facebook page “Husbands & Partners of Menopausal Women” shared the following image (archived here), with a caption suggesting that a man had a heart attack after viewing what appeared to be the severed head of his mistress in the refrigerator he shared with his extremely disgruntled wife: 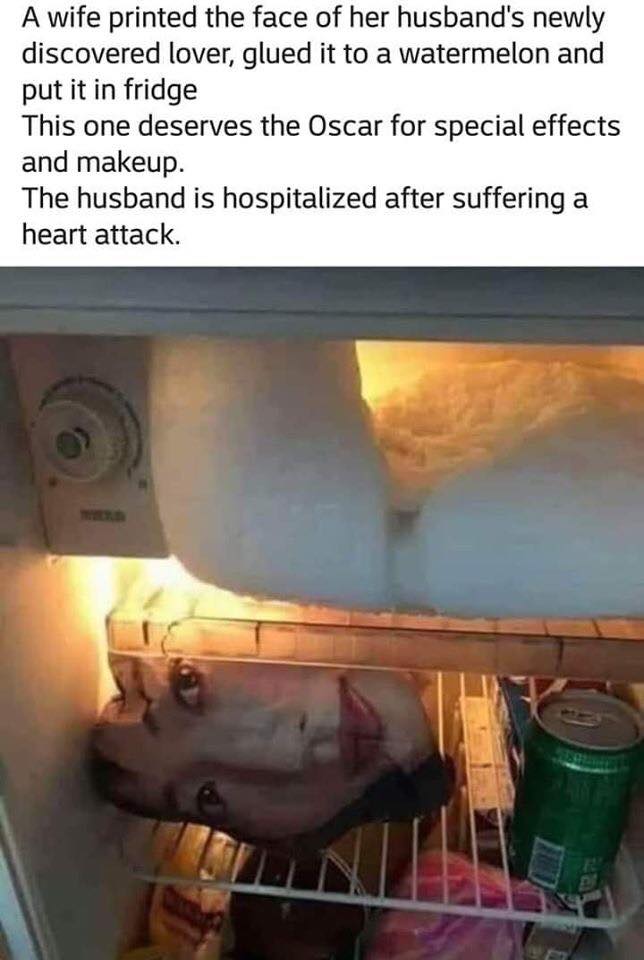 A caption at the top of the image read:

A wife printed the face of her husband’s newly discovered lover, glued it to a watermelon and put it in fridge
This one deserves the Oscar for best special effects and makeup.
The husband is hospitalized after suffering a heart attack.

The image was compelling, even without the backstory. In fact, it appeared previously on Reddit’s r/funny with no such claim presented alongside it:

This is why you should not wrap your food in newspapers. from funny

A Reddit/Imgur bot, Title2Image bot, appeared to have automatically generated a version of the post in a format with text:

A version of the image appeared to be included in a “pic dump” thread on a forum a few days before it was shared to Reddit. Another version of the image crawled on April 20 2019 blurred the visible face. It was attached to an April 10 2019 TVBS news report, which covered the Reddit thread itself, saying that the image showed possible signs of digital retouching.

The image of a purported threateningly-wrapped watermelon appeared on Reddit and Imgur a month before its Facebook appearance, accruing shares on the merits of its presentation alone. A little over a month later, a Facebook page shared the image with a backstory involving an unfaithful husband’s heart attack, but no one made that claim when the image was first shared with its original caption (“this is why you shouldn’t wrap your food in newspaper.”)