All Congressional Democrats voted against a 2.8 percent cost-of-living increase.

Weeks before the 2018 United States’ midterm elections, propaganda from across the political spectrum flew thick and fast. Some of it contained grains of truth, while other stories were completely made up, such as a particularly lazy cut-and-paste meme that appeared in mid-October: 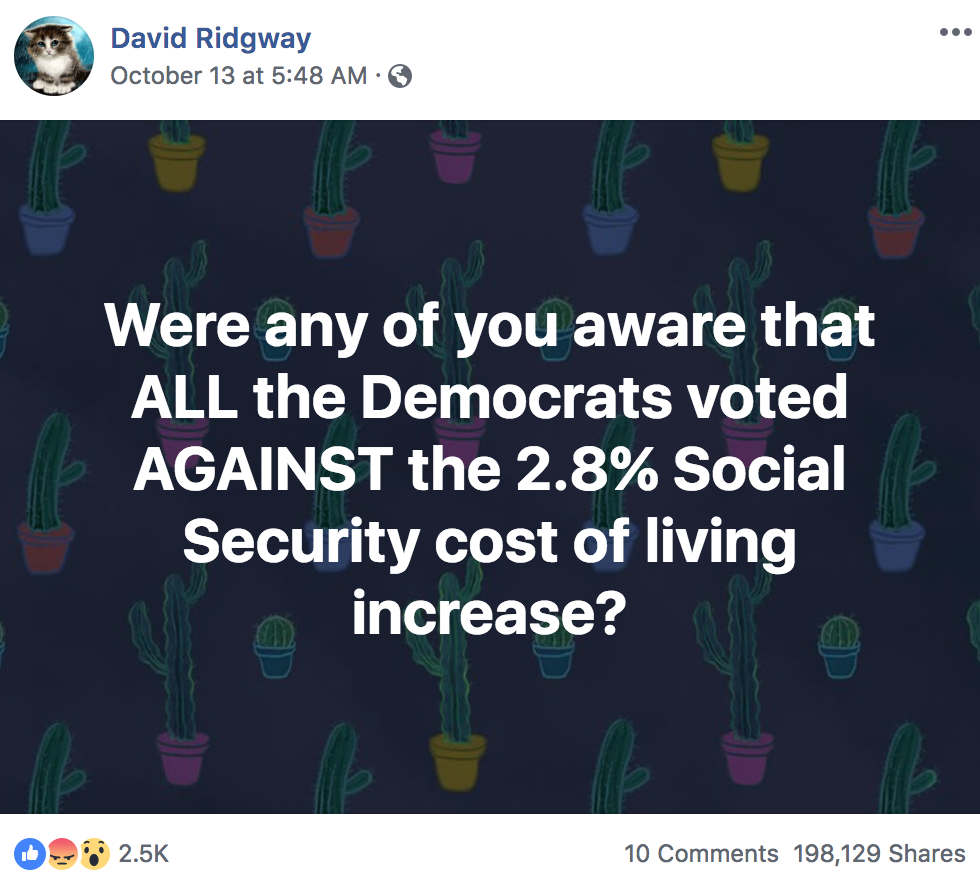 The meme asks rhetorically, without citation or supporting evidence:

Were any of you aware that ALL the Democrats voted AGAINST the 2.8% Social Security cost of living increase?

As can be seen by the share count, maybe people were not aware of it, were shocked to hear it, and were anxious to share it with their friends so that they, too, would know better.

The only problem is that it is completely untrue. Congressional Democrats didn’t vote either for or against a cost-of-living increase, because no one did. Cost of living allowance adjustments to Social Security have been pegged to annual increases in consumer prices and spending since 1975, as its own site says quite clearly:

In 1972 legislation the law was changed to provide, beginning in 1975, for automatic annual cost-of-living allowances (i.e., COLAs) based on the annual increase in consumer prices. No longer do beneficiaries have to await a special act of Congress to receive a benefit increase and no longer does inflation drain value from Social Security benefits.

A fact-sheet and a press release (both also available on the official Social Security page) add more context to the raises (emphasis ours):

The purpose of the COLA is to ensure that the purchasing power of Social Security and Supplemental Security Income (SSI) benefits is not eroded by inflation. It is based on the percentage increase in the Consumer Price Index for Urban Wage Earners and Clerical Workers (CPI-W) from the third quarter of the last year a COLA was determined to the third quarter of the current year. If there is no increase, there can be no COLA.

The CPI-W is determined by the Bureau of Labor Statistics in the Department of Labor. By law, it is the official measure used by the Social Security Administration to calculate COLAs.

Congress enacted the COLA provision as part of the 1972 Social Security Amendments, and automatic annual COLAs began in 1975. Before that, benefits were increased only when Congress enacted special legislation.

Beginning in 1975, Social Security started automatic annual cost-of-living allowances. The change was enacted by legislation that ties COLAs to the annual increase in the Consumer Price Index (CPI-W).

Congressional Democrats didn’t vote for or against the Social Security cost of living increase, because no one voted on it — by design. In other words, the factoid spread through this meme on social media wasn’t just a little wrong or slightly misinformed; it was completely made up.