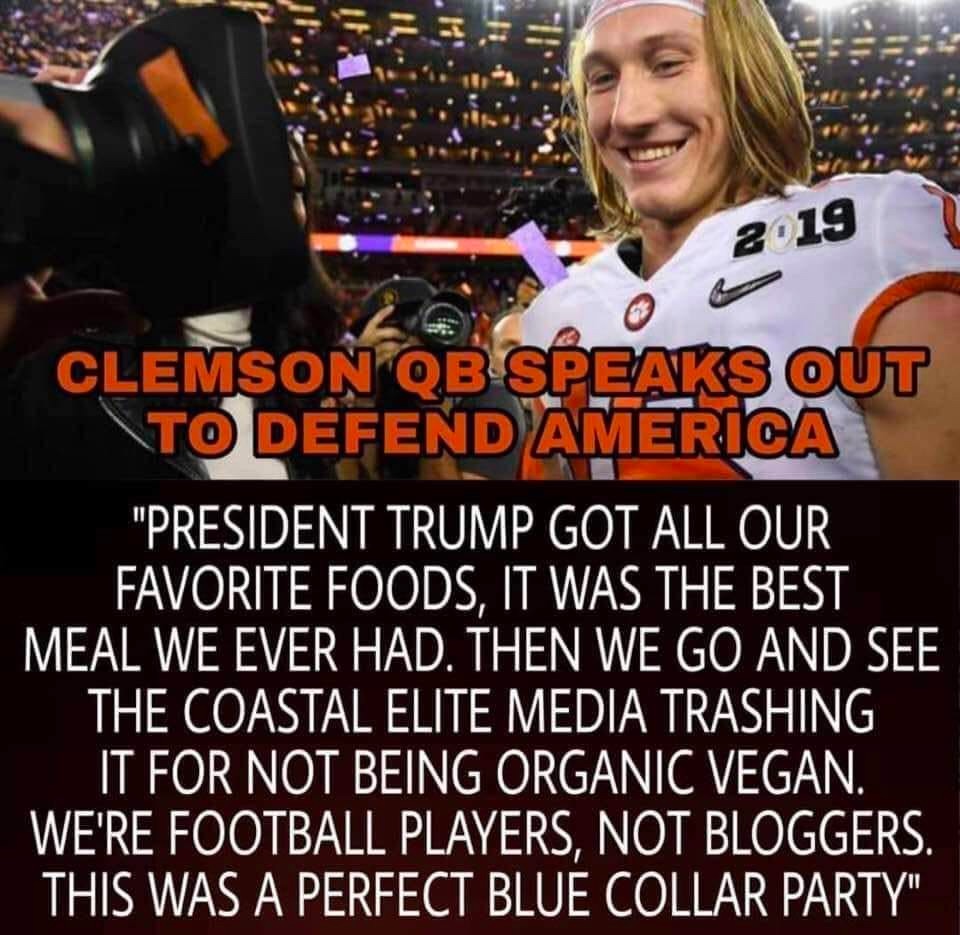 Text overlaid on a photograph of Lawrence read (in all capital letters):

“PRESIDENT TRUMP GOT ALL OUR FAVORITE FOODS, IT WAS THE BEST MEAL WE EVER HAD. THEN WE GO AND SEE THE COASTAL ELITE MEDIA TRASHING IT FOR NOT BEING ORGANIC VEGAN. WE’RE FOOTBALL PLAYERS, NOT BLOGGERS. THIS WAS A PERFECT BLUE COLLAR PARTY.”

The meme is correct on at least one count, as the menu for the Clemson visit was definitely controversial. Furthermore, TMZ reported on the day the meme spread that Lawrence spoke favorably of the food served during his White House visit:

“It was awesome,” Lawrence told us while taking pics with Clemson fans … “We had McDonalds and everything. It was good!”

Another fan asked Lawrence how many times he plans on returning to the White House — to which he replied, “Hopefully, a few more!”

News outlets that led with news of Lawrence’s praise and a tone similar to the meme did not pick up the purported quote. Chicks on the Right and the Daily Caller reported respectively:

Butthurt resisters tried to act all offended and embarrassed. They mocked the spread, but the joke’s on them because the team LOVED IT! Clemson’s QB Trevor Lawrence said it was “awesome.”

“It was awesome,” Lawrence told us while taking pics with Clemson fans … “We had McDonalds and everything. It was good!”

Another fan asked Lawrence how many times he plans on returning to the White House — to which he replied, “Hopefully, a few more!”

For the record, McDonald Trump is trending right now (libs are trying to act like it’s a bad, embarrassing thing) but I love it. OWN IT DONALD.

Clemson quarterback Trevor Lawrence was all in on President Donald Trump’s choice of fast food at the White House [on January 14 2019].

The Tigers visited the president at the White House after winning the national championship, and were served a variety of fast food.

Now, that seems like an interesting decision considering how closely watched the diets of elite athletes are watched. Lawrence didn’t seem to mind at all.

“It was awesome. We had McDonald’s and everything. It was good,” Lawrence told TMZ in a video posted [the following] morning.

Although Clemson quarterback Lawrence did praise the choice of fare served at the White House during the team’s visit, the verbose quote attributed to him so far appears to exist only on one meme being passed around social media. Quotes used by Daily Caller (above) were accurate, but the meme’s quote appeared to be fabricated. We were not able to find its source.

I never said this by the way… I don’t know where it came from.

However the trip to the White House was awesome