Congress rejected an increase to social security benefits while voting to give themselves a raise.

In a prime example of easily digestible disinformation finding ready distribution on Facebook, a citation-free, years-old claim ginning up outrage against lawmakers was resurrected as a text-based graphic in September 2019, and has been shared thousands more times on the platform since.

“Congress rejects $336 month increase in SS/SSDI,” the graphic stated. “Approves $8,872 month increase for themselves […] TELL YOUR CONGRESSMEN TO VOTE NO!” 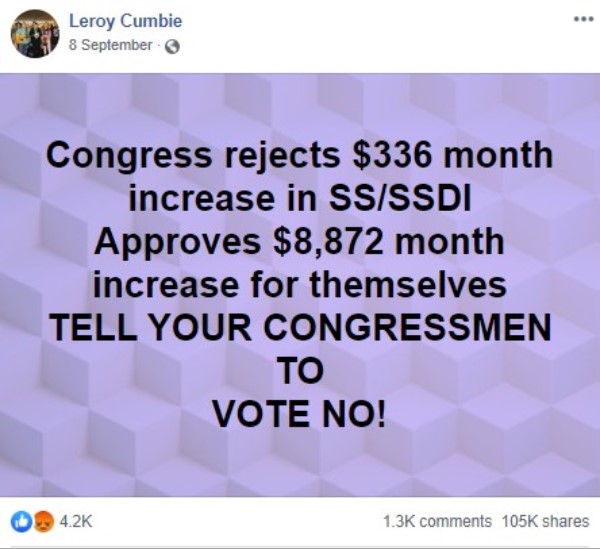 The claim is false on multiple levels. Any reader sufficiently angry over could see with a minimum of research that it was debunked by the Social Security Administration’s own website, which states:

In fact, Social Security benefits have increased every year since 1975, based on increases in the cost of living adjustment. That adjustment is not determined by Congress at all; as the SSA explains:

The CPI-W is determined by the Bureau of Labor Statistics in the Department of Labor. By law, it is the official measure used by the Social Security Administration to calculate COLAs.

It is also untrue that legislators will be getting a pay raise, though that was reportedly under consideration as part of a government funding bill for 2020 before House Democrats shelved the idea.

The post itself is a regurgitation. Another user spread the false claim around Facebook in June 2019, and similar falsehoods were also spread online as far back as 2009, with many of them trying to blame the fake “vote” against Social Security increases to the advent of the Affordable Care Act. That, too, was false.