In August 2020, Democrats removed "under God" from the pledge of allegiance at the Democratic National Convention (DNC).

On August 19 2020, a screenshot of a Fox News chyron asserting that Democrats had removed “under God” from the Pledge of Allegiance began circulating on social media:

We encountered the Fox News chyron in image-only form; it read:

A cropped edge indicated the chyron appeared during Laura Ingraham’s show, Ingraham Angle. No other information was immediately available.

Source of the ‘Dems Strike Under God from Pledge’ Chyron

Based on contextual information about the segment, we managed to locate a video which aired and was shared to YouTube on August 19 2020.

At the 23:15 mark, the chyron changes from “THE LOWLIGHTS OF DNC NIGHT 3” to “DEMS STRIKE “UNDER GOD” FROM PLEDGE WHILE PITCHING BIDEN AS FAITH CANDIDATE”: 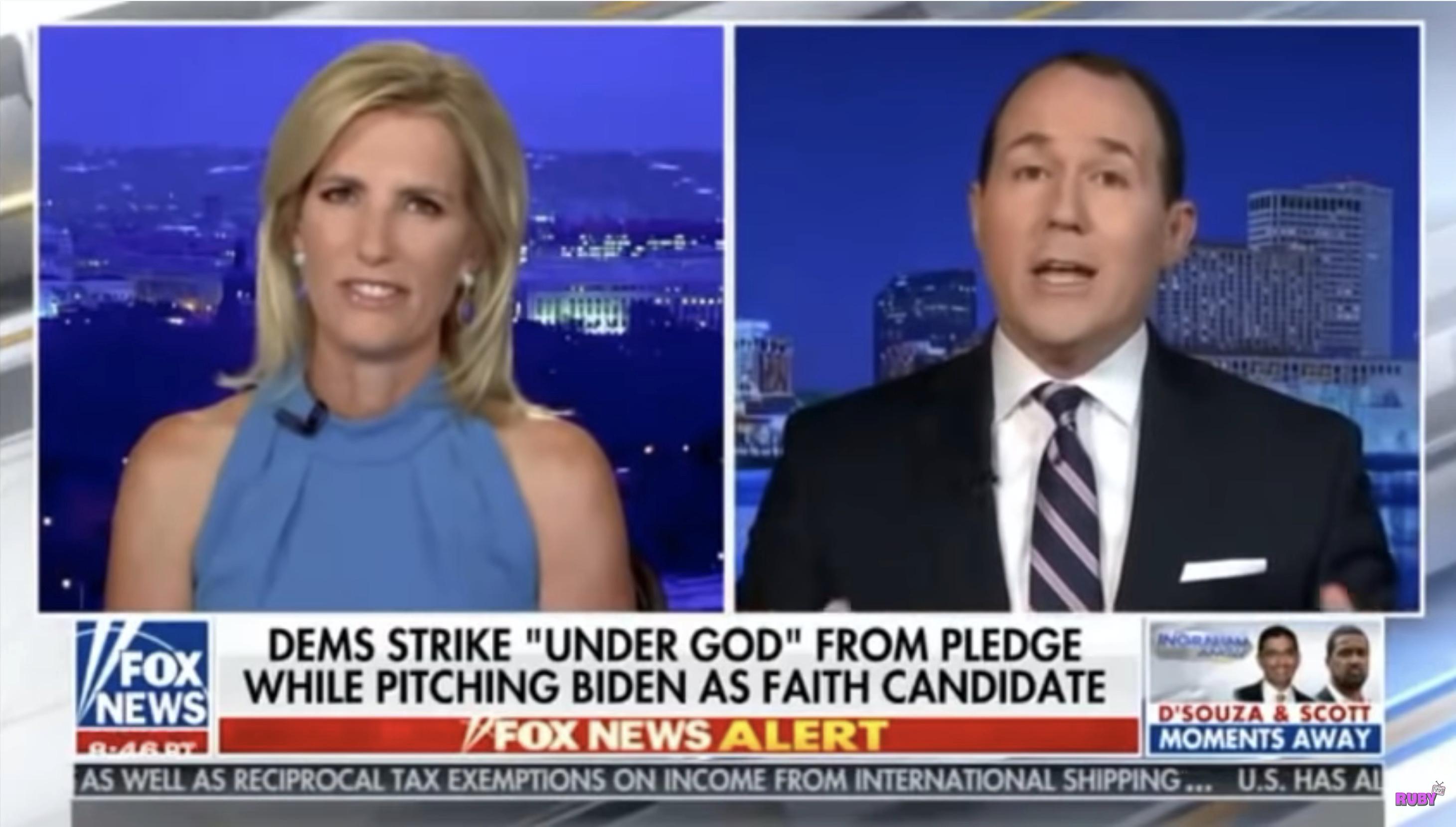 Fox News shared a transcript of the ensuing discussion between Fox News’ Laura Ingraham and Fox News Contributor Raymond Arroyo. When the chyron changed, the two discussed the content of the third night of the Democratic National Convention (DNC).

Arroyo was introduced by Ingraham, and then he said:

Laura, the Democrats smartly program this evening through their speakers, there was a theme: America is finished. It’s a dystopian nightmare out there, and then they proved it. Watch.

Next, a clip played, in which individuals discussed how “businesses around the country are bearing the economic brunt of the coronavirus pandemic.” At the end of the clip, Ingraham and Arroyo introduced the purported removal of “under God” from the Pledge of Allegiance at the DNC.

Arroyo began by addressing the content of the video clip, asserting that “blue state” lawmakers shut down states’ economies due to the coronavirus. He continued, introducing the claim about “under God”:

ARROYO: Laura, what they didn’t tell you is when you mentioned it earlier, these are mostly blue states where Democrats shut down these economies. So, of course, it looks bad. This looks like the outtakes from the Hunger Games, you know — a dark dystopian vision. This is why the ratings are so low for this entire extravaganza. People don’t want this kind of gloom and doom for three hours on end with a couple of speeches in between. Tonight, we also saw, Laura, Kamala Harris during her speech, she invoked patriotism and faith. She said, to love our country is to fight for the ideals of this country. Well, I watched a couple of the DNC caucus meetings over the last few days. This was the start of the LGBT caucus meeting earlier today.

UNIDENTIFIED MALE: If you don’t have a flag, I have flags here. I pledge allegiance to the flag of the United States of America and to the Republic, for which it stands, one nation indivisible, with liberty and justice for all.

ARROYO: I think they left something out there, Laura. But surely the Muslim caucus event wouldn’t exclude under God from the pledge, right?

UNIDENTIFIED MALE: I pledge allegiance to the flag of the United States of America and to the Republic for which it stands, one nation, indivisible, with liberty and justice for all.

ARROYO: Laura, I don’t know how they imagined that this is going to win over people of faith. I mean, you know, we all resolve these plays for people of faith today. Tomorrow, we’re going to bring you even more of their interfaith council. This may appeal to secular voters. People of faith have evangelicalism and Catholics run when they hear this kind of thing.

INGRAHAM: Well, it’s the kind of stuff also that’s in these pre-big speech events, or you really find out what’s going on in the party. And I think no one’s watching these things, you are, thank you, because — but nobody’s watching this stuff. But when you watch, that’s the nitty gritty of radicalism, and you really get a taste of what your kids are going to be taught, what the Justice Department’s going to be doing, what judges are going to be picked upon their, their credentials and their viewpoints. That’s going to govern, not, you know, we’re all going to come together and, and Kumbaya along the constitution museum. That’s, that’s not what it’s going to be.

Although the chyron said “Dems strike ‘under God'” from the DNC’s Pledge of Allegiance, the segment actually involved video from two caucuses — not the DNC itself. Before cutting to a commercial break, the segment continued:

INGRAHAM: All right, Raymond, we look forward to it. Thanks so much. And Dinesh D’Souza, Pastor Daryl Scott, they’re standing by fiery responses from both to Kamala Harris’ acceptance speech. Stay tuned.

After the break, commentator Dinesh D’Souza spoke about Harris’ acceptance speech. The Pledge of Allegiance and “under God” were not mentioned again in the transcript.

Although the chyron contained the claim that Democrats had removed “under God” from the pledge, the videos were of two caucuses — not the entirety of the convention.

On Reddit’s r/politics, a user shared a link to the partisan Washington Times, titled “DNC delegates drop ‘under God’ from Pledge of Allegiance”:

DNC delegates drop ‘under God’ from Pledge of Allegiance from politics

In the linked article, the first few paragraphs reported:

At least two caucus meetings at [August 2020]’s Democratic National Convention began with recitations of the Pledge of Allegiance that omitted the phrase “under God.”

Two videos posted online — one of the person kicking off a Muslim meeting, and the other starting an LGBT meeting — showed the Pledge being recited incompletely.

“I pledge allegiance to the flag of the United States of America. And to the republic for which it stands. One nation, indivisible, with liberty and justice for all,” delegate A.J. Durrani said at the start of the DNC’s “Muslim Delegates and Allies Assembly.”

Included were two tweets, each with video of the respective caucus recitations of the Pledge of Allegiance:

NEW! Democrats leave out, "Under God" from the Pledge of Allegiance at the #DemocraticNationalConvention Muslim Caucus meeting this week. Watch delegate AJ Durrani skip it. Featured speakers at the event were @BernieSanders @RashidaTlaib & @TomPerez @realDonaldTrump pic.twitter.com/Ra4SX2cqNy

NEW VIDEO: At the #DemocraticNationalConvention , LGBT Caucus purposely leaves out the words, "under God" from the Pledge of Allegiance. Watch. This now makes twice that two key constituencies of the Democratic Party have done this. See my earlier tweet about DNC Muslim Caucus pic.twitter.com/2GIDcCMq1F

Both clips appeared to document meetings for specific caucuses within the Democratic party. In the first clip, the Muslim Caucus speaker omitted “under God”; in the second, the LGBT Caucus speaker paused during the “under God” portion of the Pledge.

After embedding the tweets, the Washington Times added clarification about the relatively recent addition of those two words:

The phrase was not part of the Pledge when Congress first officially codified it in 1942 (it dates back in various forms to 1906). It was added in 1954 under a bill signed by President Dwight D. Eisenhower.

‘Under God’ in the Pledge of Allegiance at the 2020 DNC Nights One, Two, and Three

C-SPAN’s archive of transcribed video made it fairly easy to retrieve three days’ worth of DNC content.

Just after the three-minute mark of a video titled “Democratic National Convention, Day 1,” Rep. Bennie Thompson called the first day of the Convention to order. Immediately thereafter, the Pledge of Allegiance was recited with “under God” included: 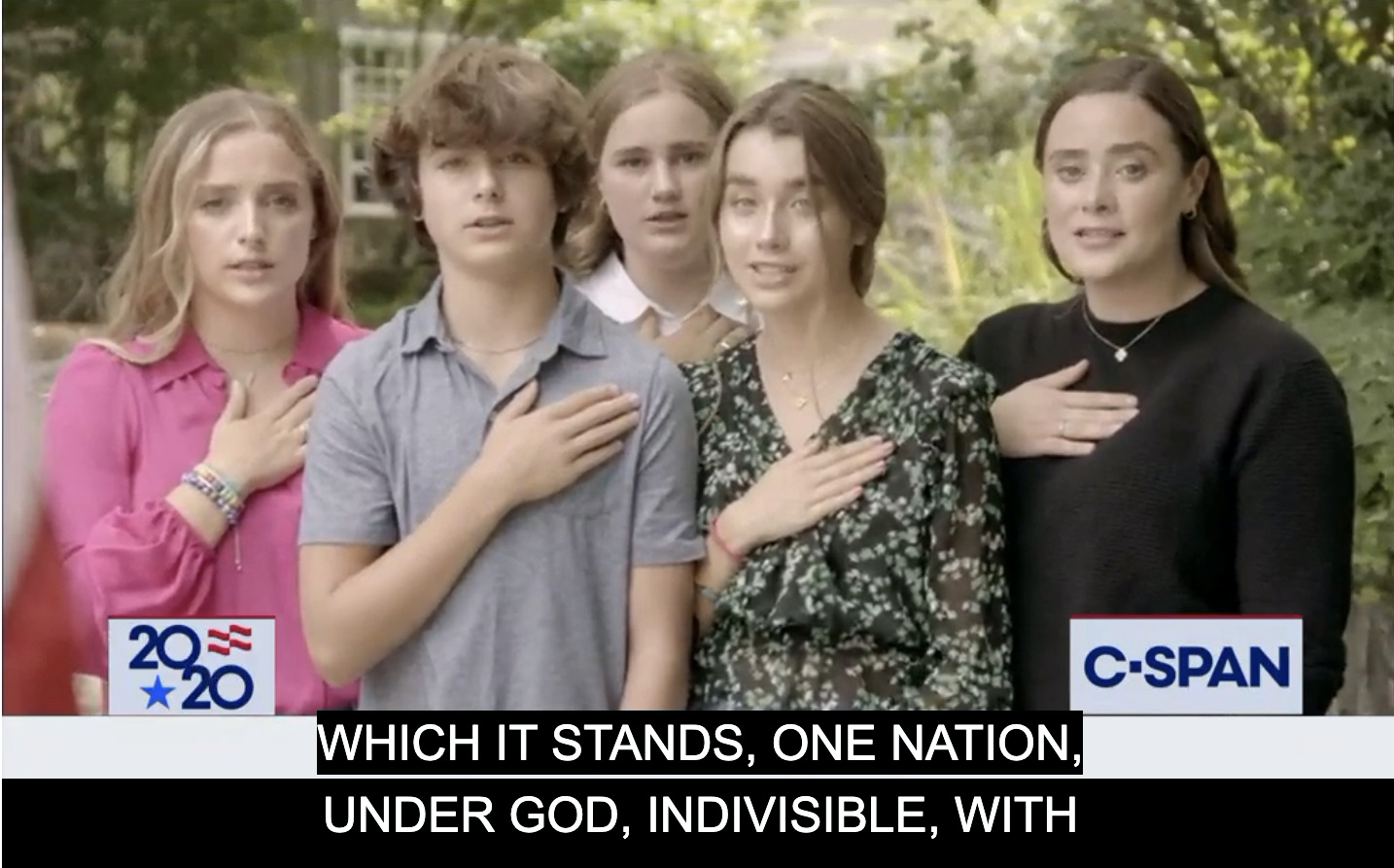 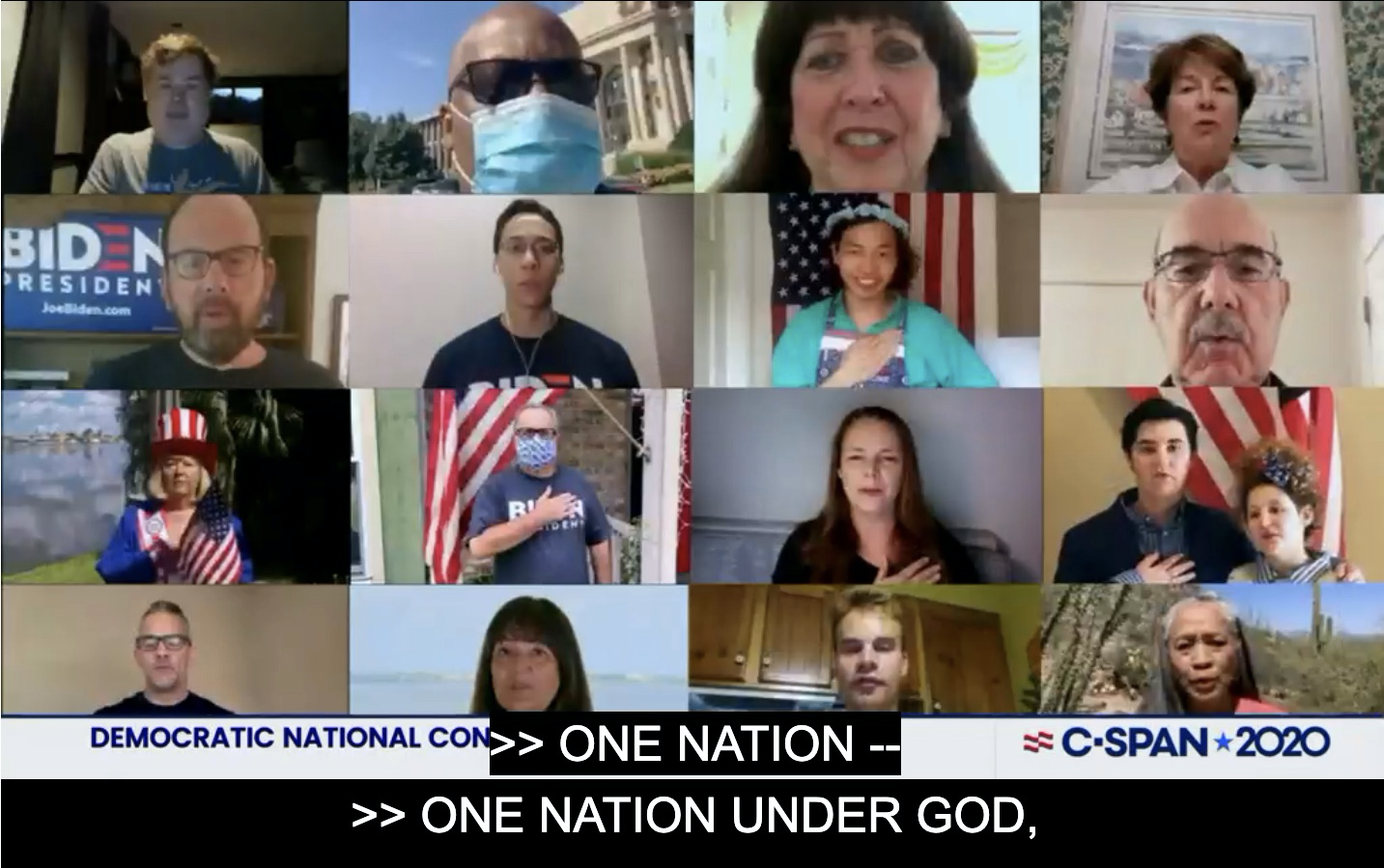 At 4:52, “under God” is included as part of the night’s recitation of the Pledge of Allegiance: 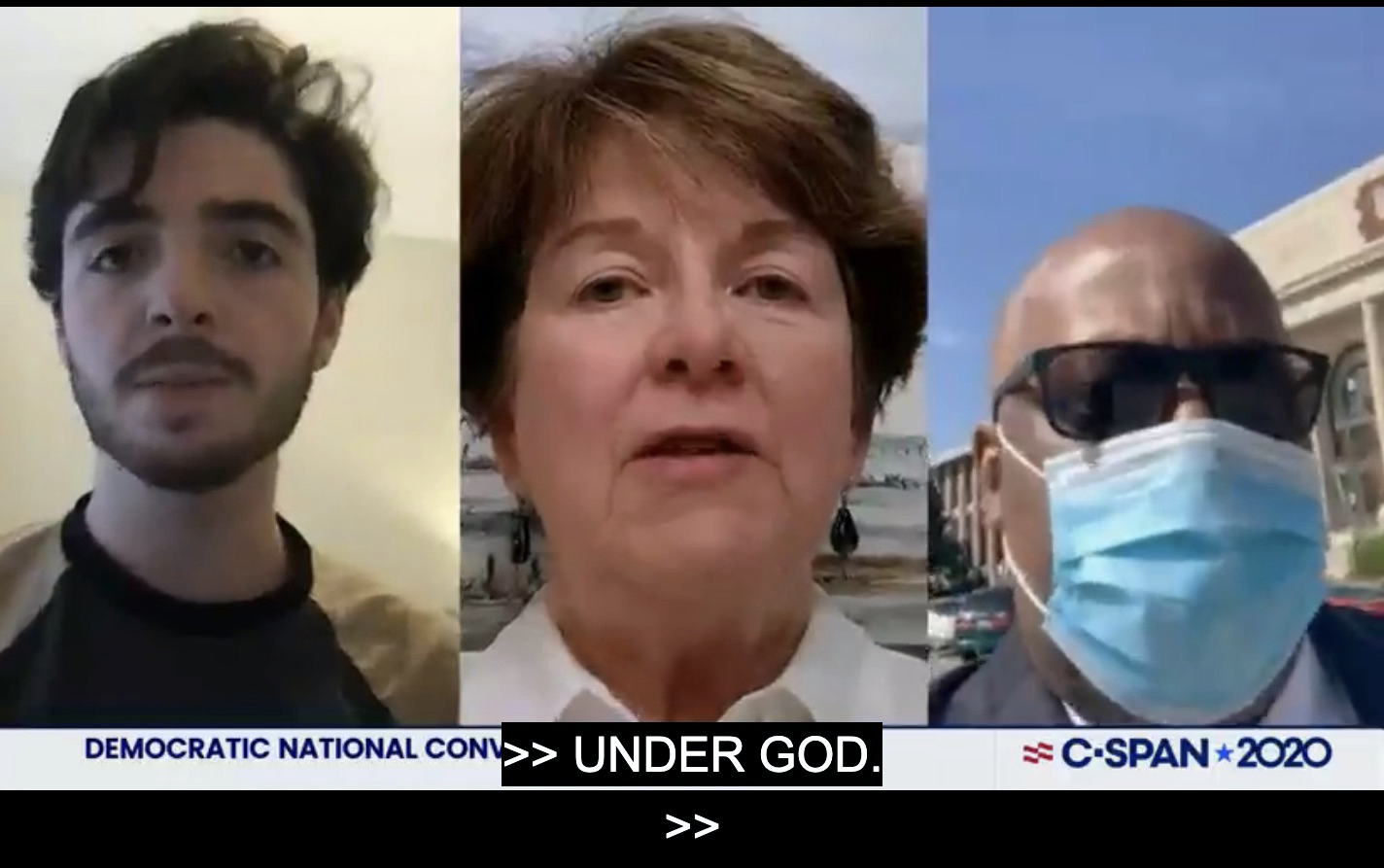 A Rev.com transcript published on August 17 2020 for the first night of the DNC not only captured “under God” in the opening Pledge of Allegiance, what followed immediately thereafter — a prayer. In the first five minutes of the transcript, the Pledge of Allegiance was not only recited with “under God” intact, but God immediately took center stage when Gabriel Salguero led the DNC in a prayer:

Intro: (00:17)
We the people of the United States, in order to form a more perfect union, establish justice, ensure domestic tranquility, provide for the common defense, promote the general welfare, and secure the blessings of liberty to ourselves and our prosperity, do ordain and establish this Constitution for the United States of America.

Intro: (01:08)
I pledge allegiance to the flag of the United States of America and to the Republic for which it stands, one nation under God, indivisible, with liberty and justice for all.

Gabriel Salguero: (04:04)
Hello. My name is Gabriel Salguero. Let us pray. Almighty God, we confess that our nation needs you and has always needed you. We pray for your blessing upon all of us, Republican, Independent, and Democrat. As we strive to form perfect union, we pray for your strength, guidance, and wisdom. Lord, we recognize that we are living in challenging times that call us to live up to the highest angel of our national character. As we confront the turbulent winds of a global pandemic, economic uncertainty, and civil discourse, may your gracious hand lead us to the peaceful shores of love, justice and civility.

Gabriel Salguero: (04:44)
Help us, oh Lord, to be ever mindful of the most vulnerable among us, from our golden generation to our youngest children, [foreign language 00:00:04:54] to our veterans, from our health care workers to our schools teachers.

Give us a heart of compassion and grace. This nation from Miami to Minneapolis, and from Portland to El Paso, ask you to shepherd us to a hope filled vision that does justice. [foreign language 00:05:14], and walks humbly before you.

I pray this in the maximus name of Jesus, amen.

Eva Longoria : (05:23)
Welcome to our convention across America. We had hoped to gather in place, but instead we figured out a safe and responsible way to come together to share ideas and talk abut the future of our country. That’s the kind of leadership we need right now. That’s the kind of leadership that Joe Biden and Kamala Harris will bring to the White House. So during the next four nights, we will gather safely from our homes to listen, to learn, to be inspired to act, to vote and to build that more perfect union. I am honored to be with you this evening.

An August 19 2020 Fox News chyron reading “DEMS STRIKE ‘UNDER GOD’ FROM PLEDGE WHILE PITCHING BIDEN AS FAITH CANDIDATE” circulated on social media, leading users to believe the Democratic National Convention (DNC) had omitted “under God” from the Pledge of Allegiance in its opening ceremonies. The chyron was misleading, and it referenced clips from two caucuses. C-SPAN video of the DNC’s opening moments on all three nights up to and including August 19 2020 showed that as the convention was called to order, the Pledge of Allegiance was recited with “under God” intact.