Evangelical activist Franklin Graham was more forgiving of reports of U.S. President Donald Trump's alleged infidelity than he was of past U.S. President Bill Clinton.

An apparent about-face from evangelical activist and Republican supporter Franklin Graham gained traction online after being captured in a graphic spread through Facebook in August 2019.

The graphic, which has been shared several thousand times on the platform, shows a pair of quotes from Graham, who has backed U.S. President Donald Trump and his administration, and the contrast between reports of infidelity on the part of Trump to his criticism of then-president Bill Clinton for the same offense years earlier. 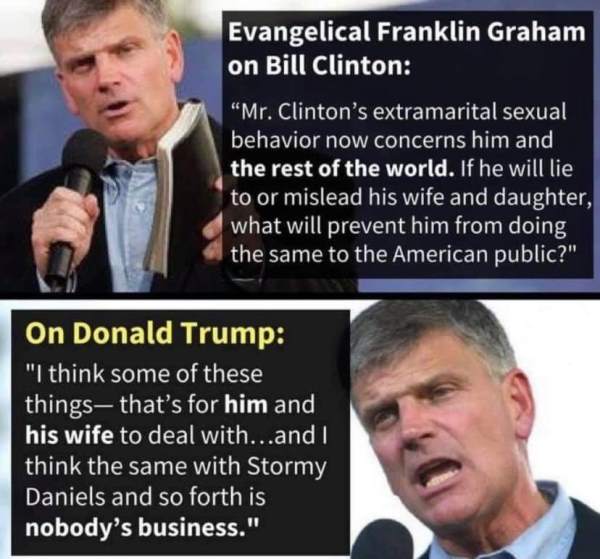 The first quote was taken from an op-ed by Graham published in the Wall Street Journal published on August 27 1998, amid reports of Clinton engaging in an affair with White House intern Monica Lewinsky. He wrote:

Mr. Clinton’s months-long extramarital sexual behavior in the Oval Office now concerns him and the rest of the world, not just his immediate family. If he will lie to or mislead his wife and daughter, those with whom he is most intimate, what will prevent him from doing the same to the American public?

The second statement was taken from an interview published by the Associated Press in May 2018, in which Graham said he was not concerned by reports that Trump had not only engaged in his own affair with adult film actress Stormy Daniels, but had her sign a non-disclosure agreement worth $130,000 to keep the matter a secret. Graham said:

I think some of these things — that’s for him and his wife to deal with. I think when the country went after President Clinton, the Republicans, that was a great mistake that should never have happened. And I think this thing with Stormy Daniels and so forth is nobody’s business. And we’ve got other business at hand that we need to deal with.

Subsequent investigations into the alleged affair led to the departure and eventual conviction of Trump’s personal attorney Michael Cohen, who was sentenced in December 2018 to three years in prison for — among other things — arranging payments to women who claimed to have engaged in affairs with Trump.

The equivocation from Graham, a native North Carolinian, earned him a rebuke from the state’s biggest newspaper a week later, in a separate column from Charlotte Observer editorial board member Isaac J. Bailey.

“This isn’t about political hypocrisy; it’s that Graham is teaching his flock that nothing really matters. He’s become a moral leader who no longer believes in morality,” Bailey wrote. “That he and his most ardent supporters aren’t ashamed of what they’ve become in service of Trump is most shameful of all.”