Canada's Prime Minister Justin Trudeau said in a speech, "Dear brothers and sisters, Islam is the only way to improve our life in Canada."

A recurring pattern of smear attempts against Canadian Prime Minister Justin Trudeau flared up yet again in February 2020, when a Facebook user attempted to gin up a meme about him using a debunked, Islamophobic rumor:

The February 8 2020 post shows a photograph of Trudeau alongside the false quote, “Dear brothers and sisters, Islam is the only way to improve our life in Canada.”

The photograph was taken from an actual speech Trudeau gave in August 2015 at the Jalsa Salana, an annual event hosted by Canada’s Ahmadiyya Muslim community. During his appearance, Trudeau said his administration would continue to oppose anti-Islam sentiment and xenophobia throughout the country:

All Canadians need to know that the government has their back. Here at home, I’m proud that Liberals were the first to stand up against the harmful suggestion that wearing a hijab is (as it has been put), “not the way we do things here.” Because as a matter of fact, it is. The Charter of Rights and Freedoms guarantees that. It’s also why I’m proud to say that Liberals will uphold the rights of people to practice their faith and participate fully in our society, no matter whether you’re wearing a niqab, a hijab, a turban, or a kippah.

That lesson was apparently lost on the commenters chiming in on the user’s post: 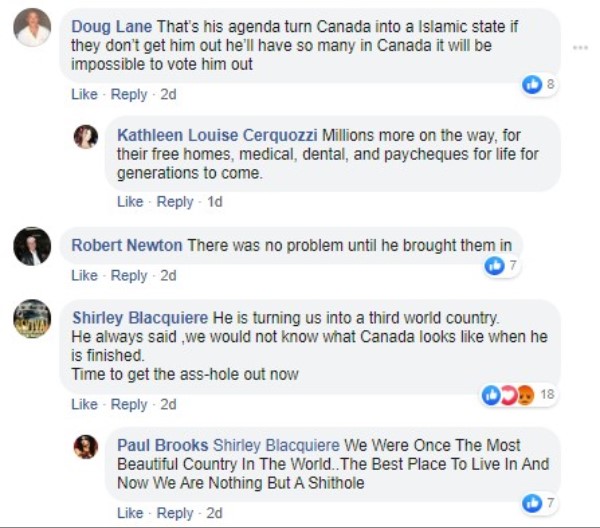 Although this post was crude even by Facebook meme standards, it is once again part of a rash of anti-Muslim posts attacking Trudeau. In June 2019, the CTV network reported that a “satirical” post claiming that the prime minister had converted to Islam had spread thanks to spam posting on social media accounts representing themselves as “conservative” and “pro-Donald Trump.”

Across all of those accounts, the story racked up more than 9,200 interactions. More than 43 per cent, or 4,002 of those interactions, happened in 2019. In many cases, the story is being shared by the same person. We took a look at five different Facebook groups where the link to the Vatican Enquirer story was posted. The same individual named ‘Pat’ posted the link over the course of five minutes.

And as The Guardian reported in October 2019, most of these long-debunked conspiracy theories date back to his 2015 campaign promise to resettle 25,000 Syrian refugees in Canada by the end of that year:

Soon after, the anti-Trudeau conspiracies began in earnest, echoing US “birthers” who alleged Barack Obama was ineligible for office or was secretly a Muslim.

By early 2016, a Toronto-based Facebook group was already speculating that Trudeau wanted to flood Canada’s borders with immigrants from majority Muslim countries, either because he was ignorant to the dangers of radical Islam – or because he was a radical Islamist himself.

“The best non-confidence statement,” one site member opined, would be for Trudeau to be shot. Neither the conspiracy-mongering nor the threats have hampered the site’s popularity. In 2016, it had 25,000 followers. Today it has nearly 235,000.

The Ahmadiyya Muslim community has also hosted conventions in the United States since 1948. According to the Jalsa Salana website, the community was formed around the teachings of Mirza Ghulam Ahmad, who “claimed to be the metaphorical second coming of Jesus of Nazareth and the divine guide, whose advent was foretold by the Prophet of Islam, Muhammad.”