Lemons are not naturally occurring, and are actually a hybrid between a bitter orange and citron.

On July 29 2019, the Facebook page “Absurd Memes for a Better Tomorrow” shared a claim that lemons are not naturally occurring:

Underneath a “what’s on your mind” tweet in a screenshot, another account responds with a purported fact (that lemons do not occur naturally in nature) and a quip:

So I just found out that apparently a lemon isn’t naturally occurring and is a hybrid by cross breeding a bitter orange and a citron. Which means life never actually gave us lemons; we invented them all by ourselves.

We were unable to find either of the original purported tweets, but an extremely popular August 2018 tweet from the account @TheWeirdWorld (Shower Thoughts) made a similar assertion:

Apparently, a lemon is not naturally occurring and is a hybrid developed by cross breeding a bitter orange and a citron. Life never gave us lemons; we invented them all by ourselves.

A commenter on that tweet disputed its claims, saying that lemons are in fact native to India:

Not true. Lemons are native to Assam, India. However the west (The US) did make a cross breed(Meyer lemon). But lemons, as they are in orignal, aren't a cross breed.https://t.co/nUm087OLLF https://t.co/PLXlQCjm68

A Google search for “are lemons naturally occurring” returns a top tweet that seemed to suggest the claim was accurate — however, it was “pinned” with an image of a similarly-worded claim, suggesting that the source was recursive: 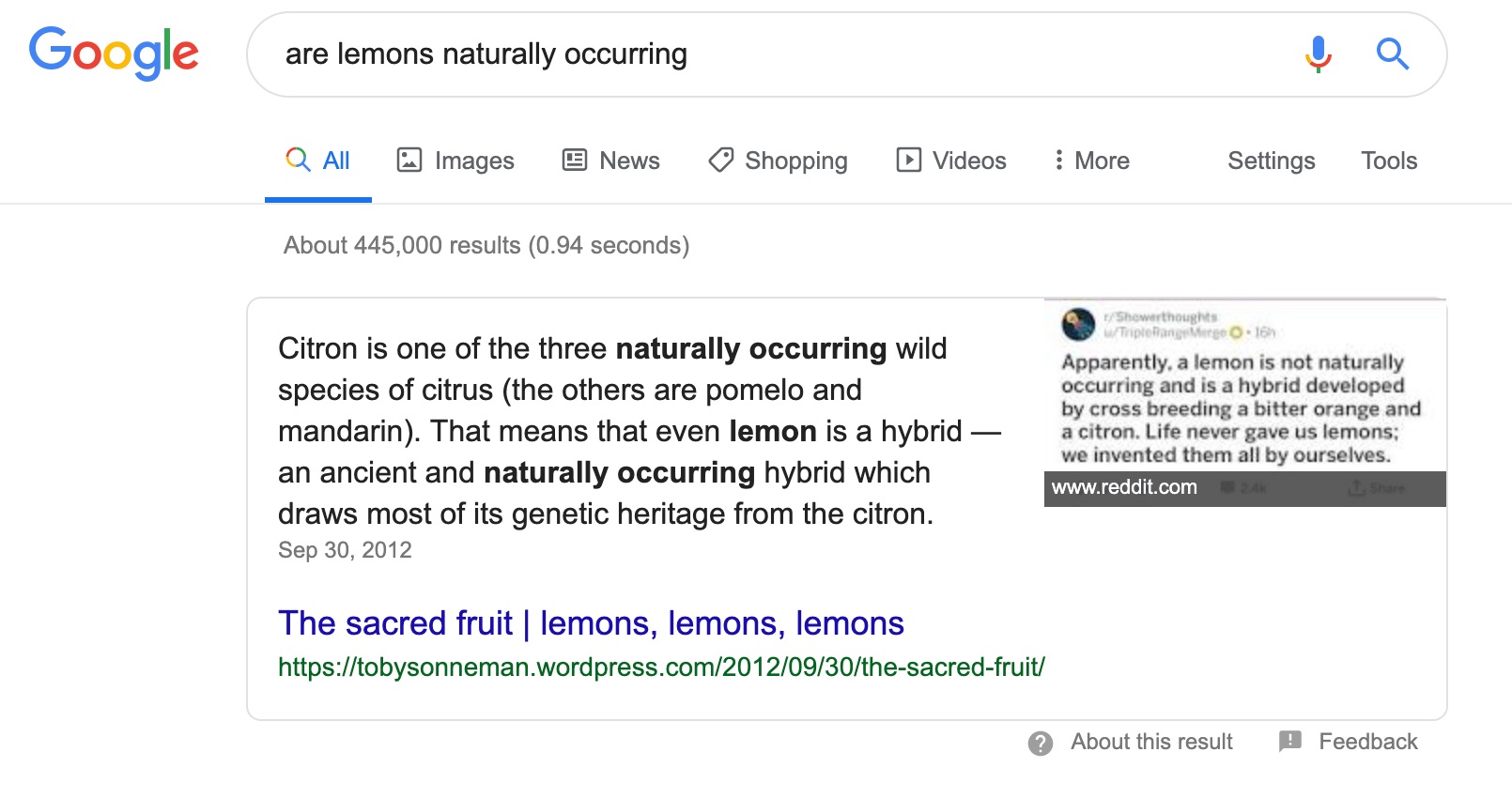 In some respects, it seemed as if the built-in joke was driving a factoid across the internet — claims that lemons o not naturally occur are almost always accompanied by the same punchline about life not “actually giving us lemons.” And one of the first Google results was a blog post carrying the phrasing later seen in tweets and on social media:

Starting with citrus fruit, we look at the common types, oranges, lemons, limes, and grapefruits. Guess what? Not one of them is naturally occurring. They’re all hybrids. Oranges are a hybrid of the pomelo and mandarin. Lemons are a hybrid of bitter orange and citron.

Claims about non-naturally occurring lemons also appeared in a thread shared to Reddit’s r/NoStupidQuestions in August 2018:

Why do people think Lemons are man made? from NoStupidQuestions

Beneath the joke that the world does not not give humanity lemons was a secondary claim: that lemons are manmade, or cultivars. According to a 1987 paper about lemon genetics, the location from which the citrus first emerged is actually unknown:

The true home of the lemon is unknown, though some have linked it to northwestern India. It is supposed to have been introduced into southern Italy in 200 A.D. and to have been cultivated in Iraq and Egypt by 700 A.D. It reached Sicily before 1000 and China between 760 and 1297 A.D. Arabs distributed it widely in the Mediterranean region between 1000 and 1150 A.D. It was prized for its medicinal virtues in the palace of the Sultan of Egypt and Syria in the period 1174-1193 A.D. Christopher Columbus carried lemon seeds to Hispaniola in 1493. The Spaniards may have included lemons among the fruits they introduced to St. Augustine. They were grown in California in the years 1751-1768.

That paper makes no mention of original lemons being a hybrid of citrons and bitter oranges, although it does identify several varieties of lemon as hybrids. One example is the Meyer lemon, thought to be a cross of lemons and a variety of orange. However, the proliferation of hybrids does not necessarily imply that humans are responsible:

Plants hybridize much more frequently and successfully than animals do. Pollen from flowering plants disperses widely and may land on flowers of other species. Chromosomal doubling (polyploidy) occurs more frequently in plants and facilitates the fertility of the hybrid offspring. Finally, plant forms are less stringently controlled than animal forms, and so the intermediate form of a plant hybrid is more likely to be physiologically successful.

A February 2017 National Geographic observed during a deep dive into the genetics of all citrus fruit that high compatibility between cultivars meant hybrids occur naturally and with ease:

Citrus, in many ways, stands alone. So many cultivated species have come from so few primary ancestors. Just three, in fact: citrons, pomelos, and mandarins, all native to South and East Asia before they started their journeys west, to places like Florida, California, and Brazil that built entire economies around fruits from the other side of the world.

Such simple lineage is the result of impressive commonality. Almost all citrus has the rare genetic combination of being sexually compatible and highly prone to mutation. Such traits allow their genes to mix, for thousands of years on their own, and eventually, at the hands of humans. The product of so much natural crossing in the wild and selective breeding at research farms and in fields is every orange, lemon, lime, and grapefruit you’ve ever eaten.

A chart with the article listed both ordinary and Meyer lemons as possible mutations of citrons, the origins of which remain uncertain. Prior research by the American Society for Horticultural Science, published in 2011, described genetic testing on various citrus varietals to determine their origin. That testing found evidence linking lemon to citron and sour orange:

The results proved that bergamot and lemon were derived from citron and sour orange, and grapefruit was a hybrid that originated from a cross between pummelo and sweet orange. The data demonstrated that sweet orange and sour orange were hybrids of mandarin and pummelo, while rough lemon was a cross between citron and mandarin. The evidence also confirmed that bergamot was a hybrid of sour orange and citron, with sour orange as the maternal parent and citron as the paternal parent.

However, research published in the Annals of Botany in 2016 noted that the “origin of limes and lemons has been a source of conflicting taxonomic opinions.” That research found a steady link to citron in both lemons and limes; other relationships were not seemingly as well-defined:

All lime- and lemon-like accessions analysed displayed a contribution from the C. medica genome. Citrons appeared mainly as a direct parent for the 12 identified clusters and independent sub-clusters and six of the unclustered MLGs. However, none of the lime and lemon accessions analysed had a C. medica maternal phylogeny. We therefore conclude that citron was the male parent. Our results extend the hypothesis proposed by several early taxonomists on the relationship between citron, limes and lemons to many more lime and lemon accessions than previous studies.

Researchers continued testing the genetic lineage of lemons and limes, noting that the “fossil record of citrus fruits is poor.” A February 2018 BBC article about that study reports that “today’s citrus fruits are the result of millions of years of evolution, followed by thousands of years of human plant breeding.” When and how lemons as we know them came into that mix is unclear.

A long-running internet rumor about the origin of lemons predicated on the adage about life “giving us” lemons asserted that lemons were “not naturally occurring” or were “man made.” Genetic research into the origins of lemons have identified citron as a possible parent plant, but scientists continue that inquiry and the exact origin of lemons remains a mystery. If lemons truly originated with citrons, citrus breeding traits indicate it was possibly an accident of nature — not necessarily a human-engineered event.